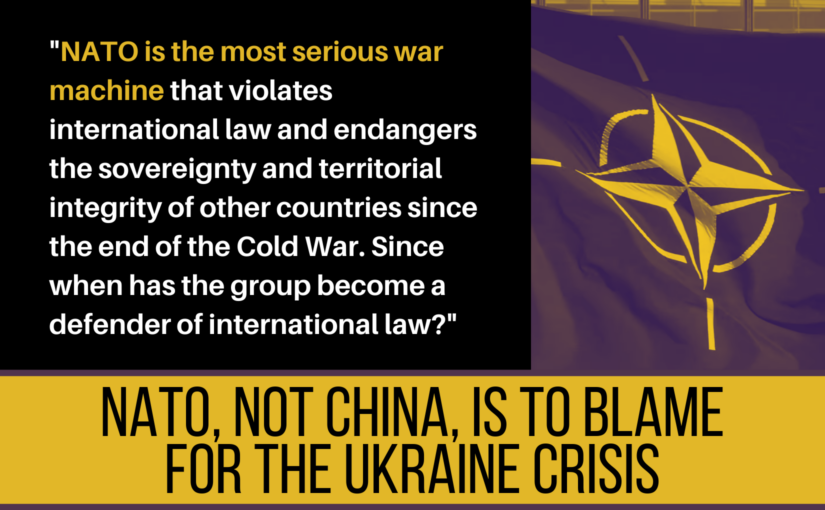 This combative opinion piece from Global Times addresses the recent comment by NATO Secretary General Jens Stoltenberg effectively labelling China as an accomplice in Russia’s military operation in Ukraine. The article recalls NATO’s history of aggression – belying the alliance’s claims to a ‘defensive’ character – and draws the logical conclusion that “this obsolete military organization … should have been dismantled long ago.”

The Ukraine crisis was largely triggered by NATO’s aggressive eastward expansion. The bloc is the culprit. Instead of reflecting on itself, NATO piles pressure on other countries to stand with it against Russia. This is unreasonable and quite sinister.

“China should join the rest of the world in condemning strongly the brutal invasion of Ukraine by Russia,” NATO Secretary General Jens Stoltenberg said on Tuesday, “The Russian invasion of Ukraine is a blatant violation of international law so we call on [China] to clearly condemn the invasion and of course not support Russia. And we are closely monitoring any signs of support from China to Russia.”

NATO is a puppet of the US, a Cold War military bloc manipulated by the US. The obsolete military organization has launched many ruthless military aggressions and triggered corresponding disasters in which local people underwent great suffering. NATO’s aerial bombing campaign against the Federal Republic of Yugoslavia in 1999 during the Kosovo War is one example.

NATO’s hands are stained with blood and the bloc itself has been a major threat to global and local security. Is NATO qualified to criticize other countries? This organization should have been dismantled long ago.

“NATO is the most serious war machine that violates international law and endangers the sovereignty and territorial integrity of other countries since the end of the Cold War. Since when has the group become a defender of international law? If it is a defender of international law, could you please first apologize for their bombing of Yugoslavia? Could you first compensate for bombing the Chinese Embassy in Yugoslavia in 1999, which left three journalists dead, and more than 20 people injured? Stoltenberg is not qualified and has no right or moral basis to make such remarks,” Shen Yi, a professor at the School of International Relations and Public Affairs of Fudan University, told the Global Times.

The West has fallen into extreme insanity, and this is quite sick. This is also a symptom of the growing abnormality of the international community under the coercion of the US and its allies. Stoltenberg’s rhetoric sounds like he attempted to label China as Russia’s “accomplice.” In terms of tensions between Russia and Ukraine, there is no absolute right and wrong, as the geopolitics, history and culture between them are too complicated. Their tensions are a difficult problem to solve. In this context, portraying their military conflict as good versus evil is not rational and detrimental to address it.

The Chinese ambassador to US Qin Gang said in an opinion piece in The Washington Post that rumors like “Russia was seeking military assistance from China” are “purely disinformation.” All this is information war initiated by the US. NATO is trying to use this kind of information war to intimidate China, and to coordinate Washington, in an attempt to occupy the moral high ground over the Ukraine crisis.

“By making such statements, NATO is trying to distort the focus of the international community from criticizing its eastward expansion to China’s so-called coordination with Russia,” Zhang Tengjun, Deputy Director of the Department for Asia-Pacific Studies at the China Institute of International Studies, said. “NATO is deliberately circumventing its role and responsibility. It is trying to shift the blame and confuse the public. This is very sinister.”

5 thoughts on “NATO, not China, is to blame for the Ukraine crisis”