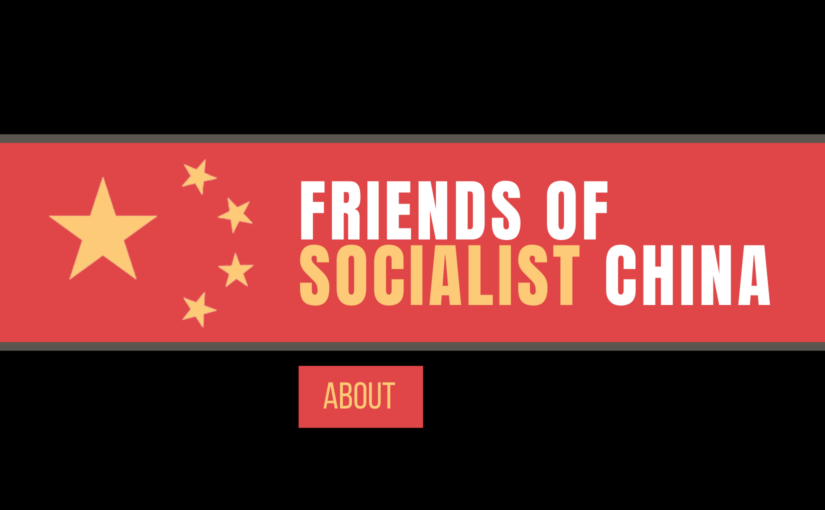 Friends of Socialist China is a platform based on supporting the People’s Republic of China and promoting understanding of Chinese socialism.

Why socialism? As Marxists, we believe that although capitalism has brought about unprecedented progress in the development of the productive forces, its expansion throughout the world has directly led to the most appalling crimes against humanity. It has proven itself totally incapable of solving the problems of poverty and inequality; meanwhile it is inextricably linked with war, empire, racism, misogyny, alienation, and environmental destruction.

The global advance to socialism is indispensable if humanity is to survive and to flourish; humanity needs socialism in order to prevent climate breakdown, end poverty, establish global peace and work towards dismantling structural discrimination and oppression. We believe that the record of the socialist countries is overwhelmingly positive; that socialism has been able to – or has the potential to – solve many of humanity’s most burning issues; that the most impressive advances in people’s living conditions have occurred under socialist systems; that socialist states and movements played the decisive role in the defeat of European fascism and Japanese militarism; that the socialist world was pivotal to the dismantling of colonialism; that the socialist states have made historic strides in tackling discrimination based on race, ethnicity and gender.

However, owing largely to the reach and power of capitalist cultural hegemony, socialism is widely considered (particularly in the imperialist heartlands) to be a brutal, authoritarian system that suppresses human creativity and impedes progress. Socialist states – past and present – are portrayed as miserable backwaters, characterised by overzealous secret services, prison camps, thought control, stale uniformity, dictatorship, famines, social conservatism, corruption and poverty. In order to promote and uphold socialism, it is important to provide a counter-narrative and corrective to this propaganda.

Why China? We support all states building or aspiring to socialism, and we favour the highest level of unity and friendship between them. We foreground China in particular because its size and level of development give it an objectively critical role in the global transition to socialism. China is the most prominent force pushing for the establishment of a multipolar system of international relations and a new international economic order; meanwhile, it is emerging as the global leader in the struggle to avoid climate breakdown. As such, the continued survival of Chinese socialism is a crucial matter not only for the Chinese people but for all humanity.

Furthermore, given its continued rise and implied threat to the US-led imperialist system, it is being subjected to an intense, systematic and escalating hybrid war, including military/economic ‘containment’ measures along with relentless propaganda. This Cold War carries with it the danger of a ‘hot’ world war, and as such constitutes an existential threat to humanity.

Friends of Socialist China will support, defend and build understanding of Chinese socialism. On our website, we will consolidate the best articles and videos related to China and Chinese socialism, along with original analysis by our editors. We will also host webinars and podcasts on relevant topics, produce fact sheets on key issues, and cooperate with other people and organisations that share our aims.

2 thoughts on “About Friends of Socialist China”