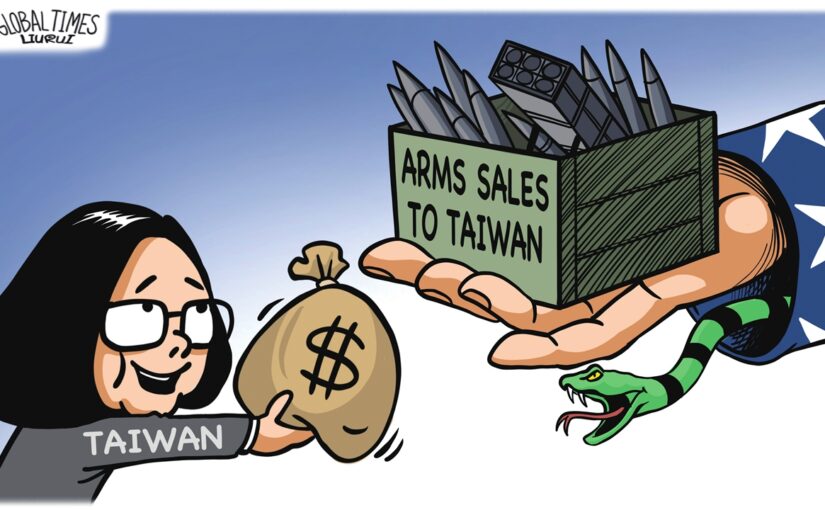 We are pleased to publish this useful article from The Socialist Correspondent about the US’s recent moves to undermine the One China principle and to expand the New Cold War. As the author points out: “An empire in crisis, the US is provoking war after war as it seeks to preserve its world domination at any cost.” The US and its allies are aiming to create an environment in which they can justify the expansion of their military infrastructure in the Pacific and deepen their project of China containment. Their aims will certainly be frustrated.

The island of Taiwan is part of China. One-China means exactly what it says: that there is only one country called China, including Taiwan. It is a principle agreed upon by the UN and 181 countries in the world, including the USA, UK, Europe, Japan and Australia. Only fourteen countries have given Taiwan diplomatic recognition – down from fifteen after the Solomon Islands established closer ties with China this year.

After Japan was defeated in WW2, all Chinese territory it had occupied was returned to China under treaties signed by the victorious Allied powers. It is these treaties the US is seeking to tear up.

So the visit to Taiwan, a renegade province of China, by Nancy Pelosi – Speaker of the US Congress, and a hugely influential politician, third in line to the presidency after Vice-President Kamala Harris – was designed to provoke. Breaking decades of US diplomacy in its relations with China, the visit served no other purpose than to challenge the One-China principle. Representing the strategic aims of US foreign policy, Pelosi was trying to goad China into a response that could serve as a pretext for future war in the Far East.

The fallout from the visit is only just beginning. After Pelosi landed in Taipei, the Chinese Foreign Ministry said her arrival would have “a severe impact on the political foundation of China-US relations, and seriously infringes upon China’s sovereignty and territorial integrity.

“It gravely undermines peace and stability across the Taiwan Strait, and sends a seriously wrong signal to the separatist forces for ‘Taiwan independence.’ China firmly opposes and sternly condemns this, and has made serious démarche and strong protest to the United States,” the ministry said.

“These moves, like playing with fire, are extremely dangerous. Those who play with fire will perish by it,” it continued.

China’s response has been restrained. It did not do as some trigger-happy commentators on Twitter called for – intervene to divert Pelosi’s flight, or even shoot it down. That would have given the US what it wanted. As the Chinese People’s Daily newspaper reported: “China’s countermeasures will not be one-off but a combination of long-term, resolute and steadily advancing actions” (3 Aug).

Currently, China is staging live-fire drills in the seas around Taiwan. These measures are designed to further establish its presence in the waters off its own coast, through which western navies – including Britain’s – frequently sail warships as they have ever since the Opium Wars of the 19th century.

The latest drills are unprecedented in scope: the first time live-fire missile tests have crossed Taiwan, flying over densely deployed US Patriot anti-missile batteries, according to the Chinese CGTN news. The drills are also the closest to Taiwan ever conducted and the first time the island has been encircled.

They establish actual control over the Taiwan Straits, ensuring that this narrow stretch of water, so vulnerable to enemy disruption of Chinese trade, cannot be choked off by western navies. Similarly, the drills are ensuring that the airspace between Taiwan and China cannot be monopolised by Taiwan.

In short, China is demonstrating its readiness to defend itself.

China has also suspended imports on around 100 Taiwanese food and agricultural firms (Politico, 3 Aug ). Chinese natural sand exports to Taiwan – used to make Taiwan’s computer chips as well as in construction – have also been suspended (China Daily, 3 Aug). As China supplies around a third of Taiwan’s sand requirements, the Pelosi visit could hit the Taiwanese economy, and beyond it the rest of the world which relies heavily on Taiwan’s semiconductors.

All these measures are a carefully calibrated response to rash western provocation. China has never sent troops into Taiwan – even though, since 1949, Taiwan has actively pursued its claim as the sole legitimate government over both mainland China and Taiwan. Taiwan’s expansionist constitution remains in place, claiming China, Mongolia, and the entire South China Sea as its territory. Taiwan’s self-declared Air Defence Identification Zone is also expansionist – covering, as it does, large parts of the south-eastern Chinese mainland.

For 73 years, China has allowed the close economic, cultural and family ties to strengthen the bonds between it and Taiwan in the knowledge that peaceful reunification will eventually come. China has stated that it will not send in troops unless Taiwan declares independence. Pelosi’s visit was an attempt to boost the pro-independence forces to the point where they become emboldened enough to act.

World reaction has not been wholly favourable to the US’s provocation. The ten member Association of Southeast Asian Nations (Asean) – a bloc consisting of Singapore, Thailand, Philippines, Indonesia, Malaysia, Vietnam, Cambodia, Laos, Myanmar and Brunei – has expressed concerns over rising tensions over Taiwan. The Straits Times newspaper in Singapore  (Aug 3) reported that  “political watchers in Singapore” believed Pelosi’s visit “was unnecessary and did not serve any strategic or foreign policy goal.” Leading Indian newspaper the Hindu Times similarly called the situation an “Avoidable Crisis” (Aug 3). South Korea’s president was away ‘on holiday’ when Pelosi visited the country after Taiwan. Pakistan clearly condemned the visit, saying that it supported “China’s sovereignty and territorial integrity”. Regional powers of whatever political stripe are wary of the US bringing war and ruin to east Asia as it has to Ukraine and Europe.

Even some in the western media have been equivocal about Pelosi’s visit – worried (like Henry Kissinger) about the US waging war against China and Russia at the same time. Simon Jenkins in the Guardian called it “blatantly provocative” (Aug 3). One prominent New York Times columnist, Tom Friedman, called Pelosi “utterly reckless, dangerous and irresponsible” (Aug 1). Donald Trump said: “Everything she touches turns to Chaos, Disruption, and ‘Crap’… and the China mess is the last thing she should be involved in – She will only make it worse. Crazy Nancy just inserts herself and causes great friction and hatred. She is such a mess!!!” (New York Post, Aug 2).

Trump’s remarks don’t reflect major cracks in US bi-partisan strategy on China, but more a question of tactical differences and timing. After all, Trump drew up the $7 billion arms deal which Biden continued, as part of an effort to “draw closer to Taipei” according to the Wall Street Journal (Sept 16, 2020). The $7 billion deal was on top of the $15 billion worth of arms already sold while Trump was in office, and in addition to Obama’s $14 billion of arms during his two terms of office. Meanwhile, Mike Pompeo, Trump’s Secretary of State, openly supported Pelosi’s visit and even offered to go with her.

Speaking for the warhawks in Europe, Lithuania’s foreign minister stated: “Now Speaker Pelosi has opened the door to Taiwan much wider, I am sure other defenders of freedom and democracy will be walking through very soon.” The British House of Commons foreign affairs committee has said it is planning to go to Taiwan in the wake of Pelosi’s sabre-rattling visit (Guardian, 1 Aug).

The majority of Taiwanese regarded Pelosi’s visit as destabilising and would like the status quo to continue. Protestors shouted outside Pelosi’s hotel: “We don’t need America to treat us as a pawn.”

Though the current Taiwanese government  of President Tsai Ing-wen is against unification and for secession, this hard line is a recent development in the island’s politics. The main opposition party the KMT (Kuomintang), which did well in local elections in 2018, has had a long-held policy of dialogue with China and has traditionally favoured close ties with Beijing (Reuters, 7 June, 2022). The KMT lost the 2016 national elections to Tsai Ing-wen’s Democratic Progressive Party. The KMT and other pro-unification parties represent in part the interests of those Taiwanese capitalists who have the closest business relations with China. There are around 1 million “taishang”, wealthy Taiwanese businessmen with vested interests in China (Pulitzer Centre, 24 July, 2020). The party more broadly favours economic ties with China, spearheaded by Taiwan’s influential elected mayors.

Clearly there is room for diplomacy between China and Taiwan. The island’s rapid economic rise – after the decades of authoritarian rule from 1949 to 1992 – is closely bound up with that of China.

But diplomacy is the last thing the US wants. The US government’s 2017 National Security Strategy stated that China poses a threat to “American power, influence, and interests, attempting to erode American security and prosperity”. The US already has covert forces in Taiwan in preparation for war. As Alexander Huang, the KMT’s head of international affairs, put it: “We have to understand that the sole standard of the US’s Taiwan policy is based on American interests, not those of Taiwan” (The Diplomat, 8 Feb, 2022).

An empire in crisis, the US is provoking war after war as it seeks to preserve its world domination at any cost. Its war in Ukraine is killing thousands of people. In Kosovo, an entity carved out of Serbia by NATO’s Yugoslav war, the US has been provoking skirmishes on the border with Serbia, in part to warn Serbia off its pro-Russian stance. Most serious of all would be a US war with China, begun by encouraging secessionist politicians in Taiwan to cut off the island from its natural partner on the mainland.

2 thoughts on “Taiwan is part of China”