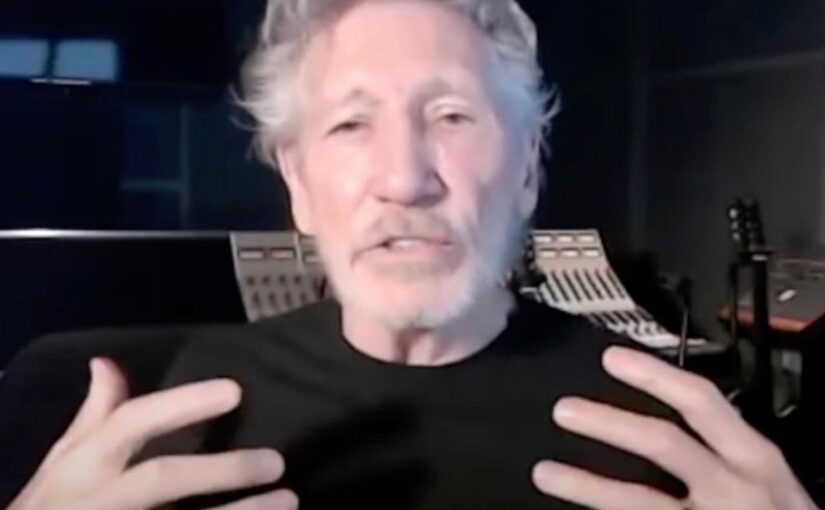 As co-founder of the band Pink Floyd, Roger Waters occupies an iconic place in the history of British rock music. He is also a progressive political activist, who does not hesitate to take a stand on anti-imperialist issues. The following article, originally carried on the World Socialist Web Site, reviews Waters’ recent interview on CNN and his participation in a webinar hosted by World Beyond War. Waters exposes US and NATO culpability for the conflict in Ukraine and also speaks about China, asserting that “Taiwan is part of China” and that, “the Chinese didn’t invade Iraq and kill a million people in 2003.”

On Saturday and Monday, English-born musician-composer and activist Roger Waters denounced the role of the US government in the war between Russia and Ukraine and discussed other contemporary political issues in two public appearances.

Waters, currently on a 38-date concert tour in North America entitled “This is Not a Drill,” appeared on Saturday morning in a short interview on CNN with Michael Smerconish and was featured in a 90-minute webinar on Monday hosted by World Beyond War.

The appearances are noteworthy—and newsworthy—because the US media in general is as tightly censored and as submissive to the authorities as that existing under many authoritarian regimes. Opposition to the US-NATO war with Russia and/or the campaign to demonize China is simply not encountered on American television or in the pages of the daily newspapers.

In the course of the CNN interview, Waters took the opportunity to explain why, during his concerts, he includes President Joe Biden as a “war criminal” who is “just getting started” on a list along with every other US president since Ronald Reagan.

In reviewing the facts that prompted the characterization of Biden, Waters showed that Smerconish—who presents himself on his weekly CNN program and in other journalistic pursuits as a “balanced” commentator—is merely another mouthpiece for US propaganda.

Waters began to explain that Biden is “fueling the fire in Ukraine for a start. That is a huge crime.” When the musician observed that it was a “horrific and horrendous war” with Russia, Smerconish interjected, “But you’re blaming the party that got invaded. Come on, you’ve got it reversed.”

“This war,” Waters responded, “is basically about the action and reaction of NATO pushing right up to the Russian border, which they promised they wouldn’t do when [Mikhail] Gorbachev negotiated the withdrawal of the USSR from the whole of Eastern Europe.”

Significantly, when a transcript of the interview was posted online, it became clear that CNN producers had deleted a portion of Waters’ comments. Speaking of Ukrainian president Volodymyr Zelensky, Waters suggested that “somebody either whispered in his [Zelensky’s] ear or he completely changed his mind about making peace in the Donbas and about solidifying the Minsk agreement and making peace with their Russian neighbors” and obviating the need for the war.

Smerconish then asked, “What about our role as liberators?,” to which Waters replied, “You have no role as liberators.” When Smerconish pointed to the US intervention in World War II, Waters observed, “Thank God, the Russians had already won the bloody war almost by then. Don’t forget 23 million Russians died protecting you and me from the Nazi menace.”

This prompted Smerconish to assert that Russia should have “learned their lesson from war” and not “invaded Ukraine.” Waters told the CNN commentator, “I would suggest to you, Michael, that you go away and read a bit more and then try and figure out what the United States would do if the Chinese were putting nuclear armed missiles into Mexico and Canada.”

Smerconish blurted out, “The Chinese are too busy encircling Taiwan, as we speak.” Waters became more animated, “They’re not encircling Taiwan. Taiwan is part of China. And that has been accepted by the whole of the international community since 1948 and, if you don’t know that, you’re not reading enough.”

Unabashed, Smerconish doubled down and spouted further anti-Chinese propaganda: “If you are having a conversation about human rights, at the top of the list of offenders are the Chinese.” Waters replied, “The Chinese didn’t invade Iraq and kill a million people in 2003. In fact, as far as I can recall—hang on a minute, who have the Chinese invaded and murdered, slaughtered?”

When Smerconish, answered provocatively, “Their own,” Waters replied bluntly, “Bollocks. That’s absolute nonsense. You should go away and read.”

On Monday afternoon, Waters participated in an extended webinar moderated by Todd Pierce and David Swanson of World Beyond War, a global peace organization. In the online forum, the musician made introductory comments and the balance of the webinar was devoted to his answering questions from the moderators and live viewing audience.

Throughout the 90-minute program, Waters demonstrated his considerable knowledge of historical and contemporary international politics. Among the issues he discussed were the recent Israeli military assault on Gaza, the ongoing US embargo of Cuba and the NATO attack on Syria in 2018, prompted by false claims that the Assad regime had carried out a chemical attack.

Waters also responded to questions about Pink Floyd and his solo musical works. In his answers, he demonstrated that, despite the decades-long artistic and political friction between himself and the others in the group, he was capable of being objective about the contributions of his fellow Pink Floyd band members.

Speaking of his current tour, Waters commented, “I’m getting this weird feeling that, unlike other gigs I’ve done in the past, this gig sort of feels like it might be turning into a movement of some sort. I’m not saying I’m leading a movement, but what I’m saying is, I’m part of the movement and so many people in the audience are part of it or are capable of becoming part of it, that it feels like we are really together and that we are really talking to one another.” This is a significant insight, and points to the global radicalization under way.

One of the benefits of the World Beyond War webinar was that it gave Waters an opportunity to expand on some of the points he broached on CNN.

Waters explained that the concept of his “This is Not a Drill” concert tour originated as a response to “that daft announcement that they make when it’s a drill and when they’re saying ‘You’re about to die in a nuclear war. This is not a drill.’ … [In this way] They tell you that it IS a drill and that it’s not real.”

He went on to say that the “gangster morons who run the world” were doing more to bring about a nuclear war “at the moment … than at any time in my lifetime.” Waters then compared the present day to the Cuban missile crisis of 1962 and explained, “at least JFK and Nikita Khrushchev were talking to one another about things.”

In the current crisis, Waters remarked, “Russia has been designated the new primary enemy of the United States of America Empire.” Biden and Secretary of State Antony Blinken “and the rest of that sorry crew, not to mention the opposition who are even sorrier” are “not speaking to the Russians.”

Waters debunked the lie that “China is trying to take over the world” by asking, if the Chinese had that ambition, “Why aren’t they spending more money on the military? They only account for 3.1 percent of military spending in the world, whereas the United States accounts for 39 percent.”

Not surprisingly, Waters has come under attack by the corporate media in the US, Canada and the UK. The Hill published an article Monday whose headline contains an obvious falsehood, “Pink Floyd’s Waters backs Russia, calls Biden a war criminal.” Anyone who bothers to look into what Waters has been saying since the February invasion of Ukraine by the Putin regime knows that he does not support the Russian actions.

Canada’s Globe and Mail, published in a country whose ruling elite is closely associated with Ukrainian fascist elements, put together an article plucked from Twitter posts by disgruntled fans who do not care for Waters’ politics. The article tells its readers that “Fans slam Roger Waters and tell him to ‘stick to what you’re good at’ as they threaten to sell their tickets to his ‘This is Not a Drill Tour’ after he branded Joe Biden a ‘war criminal’ over Ukraine.” A review of the Twitter activity about Waters demonstrates that those who support his views are in a solid majority. The Globe and Mail piece is classic, anti-communist drivel.

Britain’s The Independent online chimed in, asserting that Waters faces a “backlash after calling Biden a ‘war criminal’ over Ukraine and saying Taiwan is part of China.” Again, the aim of this kind of disinformation is to incite the backlash it claims to be “reporting.” Waters is not likely to be fazed by these stupid and obvious CIA-State Department-inspired tactics.