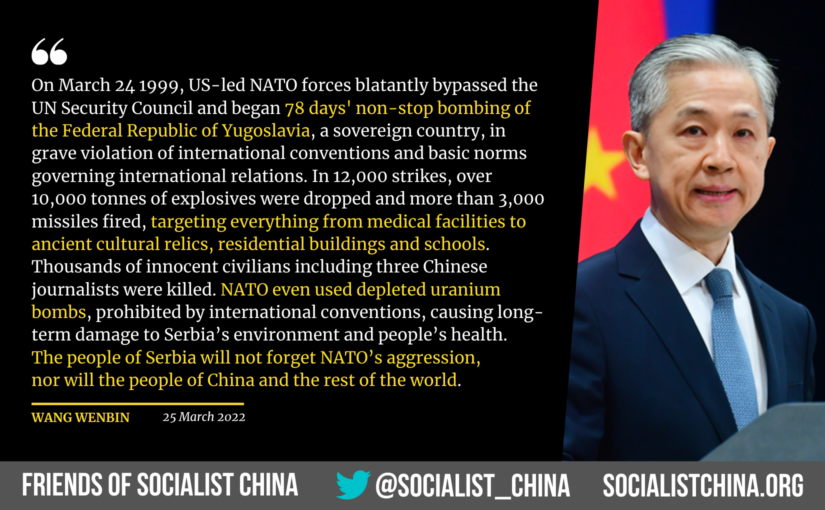 Speaking at the Ministry of Foreign Affair’s press conference on March 25, 2022, Spokesperson Wang Wenbin commented on NATO’s attack on Yugoslavia (which was launched 23 years ago) and NATO’s record as an aggressive alliance and product of Cold War.

On March 24 1999, US-led NATO forces blatantly bypassed the UN Security Council and began the 78-day incessant bombing of the Federal Republic of Yugoslavia, a sovereign country, in grave violation of relevant international conventions and basic norms governing international relations. In 12,000 strikes, over 10,000 tonnes of explosives were dropped and more than 3,000 missiles fired, targeting everything from medical facilities to ancient cultural relics, residential buildings and schools. Thousands of innocent civilians including three Chinese journalists were killed. During the bombing campaign, NATO even used depleted uranium bombs prohibited by international conventions, causing long-term damage to Serbia’s environment and people’s health. The people of Serbia will not forget NATO’s aggression, nor will the people of China and the rest of the world.

NATO is convening a summit on Ukraine on the 23rd anniversary of its bombing of the Federal Republic of Yugoslavia. I wonder if the US and other NATO members have asked themselves: What is the root cause of the Ukraine crisis? What responsibility should the US and NATO assume? Before reflecting on their crimes against the people in countries like Serbia, Iraq and Afghanistan, the US and NATO have neither right nor authority to judge others. Born out of the Cold War, NATO serves no other purpose than war. It has never contributed to peace and security of our world and will never do so. All those who truly love peace and are committed to advancing peace will resolutely reject NATO’s continued expansion.