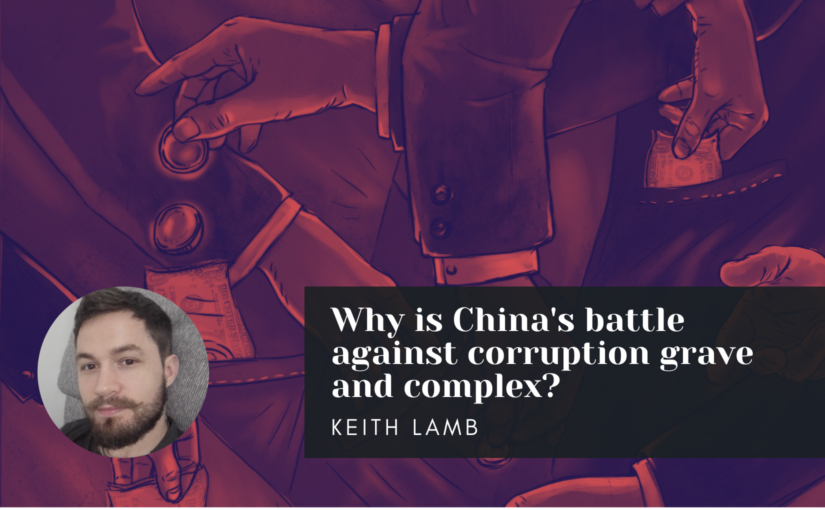 In this original article, Keith Lamb explains that, whilst China has scored enormous achievements in the battle against corruption, it still faces an uphill task in preventing new cases and rooting out existing ones.

Because the CPC is a Marxist party, Keith explains, with the historic mission to usher in socialism, it has to hold itself to higher standards than those political parties which operate within the framework of capitalism. However, when working towards socialism, utopian action will fail. Therefore, China took the pragmatic road by adopting a socialist market economy, which has advanced the forces of production and technology necessary for socialist development. However, this also creates a series of class and material contradictions that need to be navigated.

Achieving China’s goal of becoming a prosperous and modern socialist country by 2049, the author notes, not only requires a constant battle against corruption, but also provides part of the remedy for corruption.

Recently at the second plenary session of the 20th CPC Central Commission for Discipline Inspection (CCDI) it was noted that the corruption situation, in China remains grave and complex. The Communist Party of China (CPC) faces an uphill task in preventing new cases of corruption and rooting out existing ones.

In recent years, there have been enormous achievements in the battle against corruption at all levels of officialdom, which is encapsulated in the slogan “striking tigers and swatting flies.” In 2018, Lai Xiaomin the former state asset manager was executed for taking $277 million in bribes, and Sun Zhengcai, the former Chongqing Party Chief, was given life imprisonment for taking $27 million in bribes.

As of June 2022, a total of 4,516,000 corruption cases were handled by disciplinary authorities, and 4,439,000 people were punished for violating discipline. Just over a month after the closing of the 20th CPC National Congress, more than 10 officials who were suspected of severe violations of discipline and laws had turned themselves in.

Considering such successes, one may ask why the corruption situation still remains grave and complex. First, the massive anti-corruption campaign launched after the 18th National Congress was unprecedented in size, due to corruption becoming so deep-rooted. Consequently, considering the magnitude of the problem, no matter the achievements already accumulated, there is still much to do.