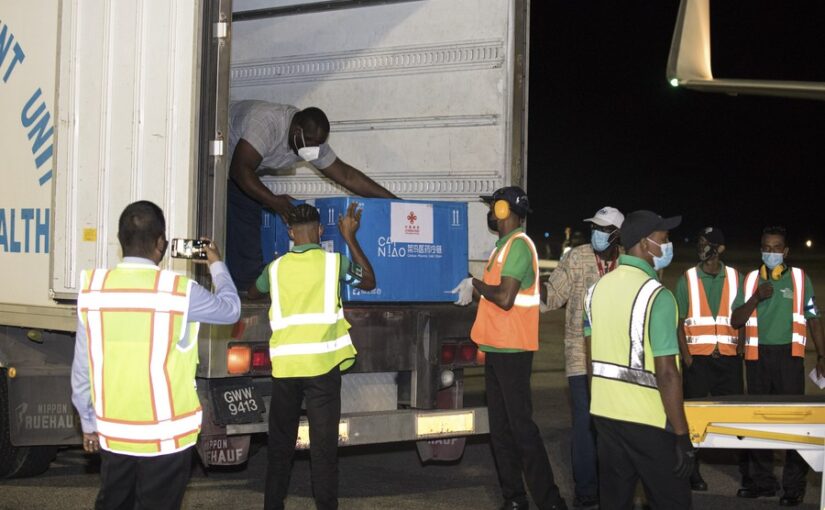 On June 27th, China and Guyana celebrated the 50th anniversary of their establishment of diplomatic relations. Guyana’s bold move, becoming the first country in the English-speaking Caribbean to establish official relations with the People’s Republic, was followed by Jamaica on November 27th that year. Together this marked a milestone in the development of friendship and cooperation between the peoples of China and the Caribbean and in the developing countries’ common struggle against imperialism.

Marking this anniversary, Chinese President Xi Jinping exchanged messages with his Guyanese counterpart Irfaan Ali. Writing in the local media, China’s Ambassador to Guyana Guo Haiyan noted that trade between the two countries grew by 123% in 2021.

Friendship with China constitutes a bipartisan policy in Guyanese politics. A statement from the Office of the Leader of the Opposition noted that:

“We in Guyana will and must always appreciate that during the 1980s, when the country faced steep economic challenges, China without hesitation provided much needed assistance to Guyana. With modest beginnings in the seventies, the economic exchanges have grown to impressive dimensions. Guyana and China now cooperate over a wide range of economic areas and are involved in major projects which can transform Guyana and benefit China as well. The emergence of Guyana as a petro-state will further catalyse and intensify this trend.”

An example of this was the conclusion last month of a US$260 million agreement with a Chinese joint venture company for the construction of a new bridge across the Demerara River. Speaking at the ceremony, Guyana’s Finance Minister, Dr. Ashni Singh said: “Make no mistake that you are witnessing history today. The making of modern Guyana is well underway, and today’s generation of Guyanese are incredibly privileged not only to witness it, but to be part of it.”

Writing in China Daily on June 15th, Donald Rabindranauth Ramotar, who was President of Guyana from 2011-2015, and General Secretary of the People’s Progressive Party (PPP) from 1997-2013, said that:

“When China established diplomatic relations with Guyana in 1972, it was still very underdeveloped. Guyana’s per capita GDP was higher than that of China. Yet China helped the country try to lessen its dependence on a few big capitalist countries and the unequal trade relations inherent in capitalist relations.”

Ramotar goes on to explain how this relationship has only deepened as China has grown from a poor developing country to become the world’s second-largest economy. China, he notes, “has become a great example. It is one of the most studied countries as mankind looks to build a better future.”

We are pleased to reprint his article below.

On June 27, Guyana and the People’s Republic of China will celebrate 50 years of diplomatic relations. These have been 50 very fruitful years, and our relations have been mutually enriching for both countries.

When China established diplomatic relations with Guyana in 1972, it was still very underdeveloped. Guyana’s per capita GDP was higher than that of China. Yet China helped the country try to lessen its dependence on a few big capitalist countries and the unequal trade relations inherent in capitalist relations.

We recall the assistance China provided for the establishment of the Sanata Textile Mill in Georgetown and the clay brick factory in Canal’s Polder. At that time, these were significant investments in the country. Many houses, built with materials produced by the clay brick factory, are still standing and are testament to the friendship between China and Guyana.

China has changed dramatically over the past 50 years. From being a poor developing country, it has developed into the world’s second-largest economy, and its prestige has soared, with its achievements known around the globe. It leads the world in many spheres of the scientific and technological revolution and has had an impact on almost every country. It is widely recognized for its innovation and progress.

China has become the greatest builder in the world, in terms of both physical structures that it has constructed at home and abroad and in its advocating of fair international relations. It promotes true equality and the independence of countries. China correctly describes its partnerships as “win-win”. This gives dignity to every country. For the first time, many small and middle-income developing countries have the belief that they are on an equal footing with other higher-income countries.

We in Guyana, like so many other countries, have benefited greatly from cooperation with China over the years. Some of our most important structures have been built by Chinese contractors. The convention center and the Marriott Hotel stand out in Georgetown and evoke pride among our people.

Our airport is being modernized by another contractor from China. Moreover, we have agreements with Chinese companies to build a modern bridge across the Demerara River.

In 2013, President Xi Jinping proposed the Belt and Road Initiative. This has the great potential to really unite the world and create new wealth and prosperity for all participants.

Guyana has signed up with China to be part of this historic project, which is uniting millions of people around the world.

This initiative has also prompted the West to react. Not so long ago, the United States and the European Union, still unable to shed their old habits in pursuit of self-interest, announced their own initiative to help build up world infrastructure. They have talked of millions of dollars to begin this work. At this time, its performance cannot be evaluated, since it is only at the embryo stage.

What is very significant about this Western project, though, is that it has come about primarily not as a means to assist the less wealthy Third World countries but to counter the constructive move of China and to try to limit China’s great influence in the world. That, of course, is not a good premise to start from.

These are remarkable feats.

China has become a great example. It is one of the most studied countries as mankind looks to build a better future.

Fifty years of diplomatic relations between China and Guyana have seen very beneficial cooperation and a demonstration of support without strings attached. This is not unique, because this is how China relates with all countries it has ties with, and the win-win approach promotes friendship, solidarity and peace.

In evaluating this period, we must give it the highest marks and further deepen our ties with the People’s Republic of China. Most important, the past 50 years of good diplomatic relations between the two countries have strengthened the close friendship between our peoples.

The author is former president of Guyana. 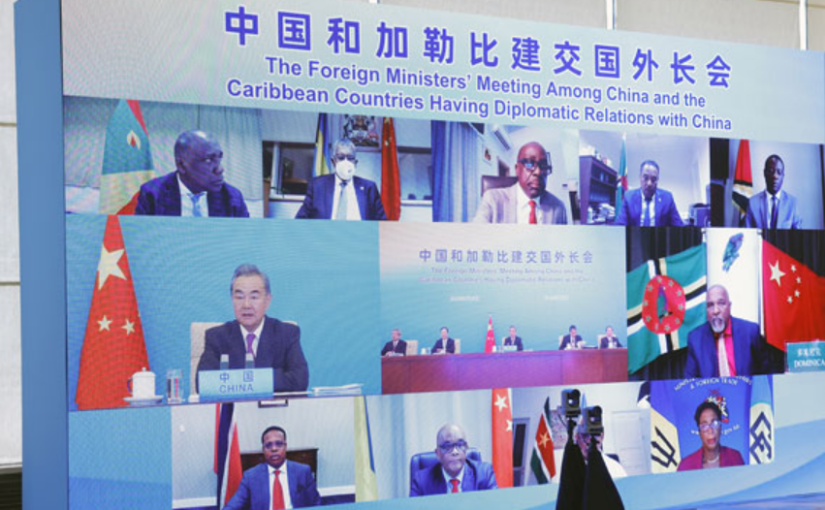 On April 29th Chinese Foreign Minister Wang Yi joined Acting Prime Minister of Dominica Reginald Austrie in jointly hosting a video meeting with the foreign ministers of Caribbean countries having diplomatic relations with China. (Austrie was deputising for Dominican Prime Minister Roosevelt Skerrit who was paying an official visit to Cuba where he was awarded the Order José Martí, the socialist Caribbean island’s highest honour.) Foreign Ministers of Antigua and Barbuda, the Bahamas, Barbados, Grenada, Guyana, Jamaica, Suriname and Trinidad and Tobago attended the meeting.

Wang Yi said that China and the Caribbean countries enjoy long-standing friendship, and the two sides are good friends, good partners and good brothers sharing the same ideal. He put forward four suggestions to further develop the partnership between the two sides.

This year marks the 50th anniversary of the establishment of diplomatic relations between China and the English-speaking Caribbean. Guyana led the way on 27th June 1972 followed by Jamaica on 21st November that year. At the meeting, Guyana’s Foreign Minister Hugh Todd commended Beijing for its “commitment to true multilateralism”.

The following two reports were originally published on the website of the Ministry of Foreign Affairs of the People’s Republic of China.