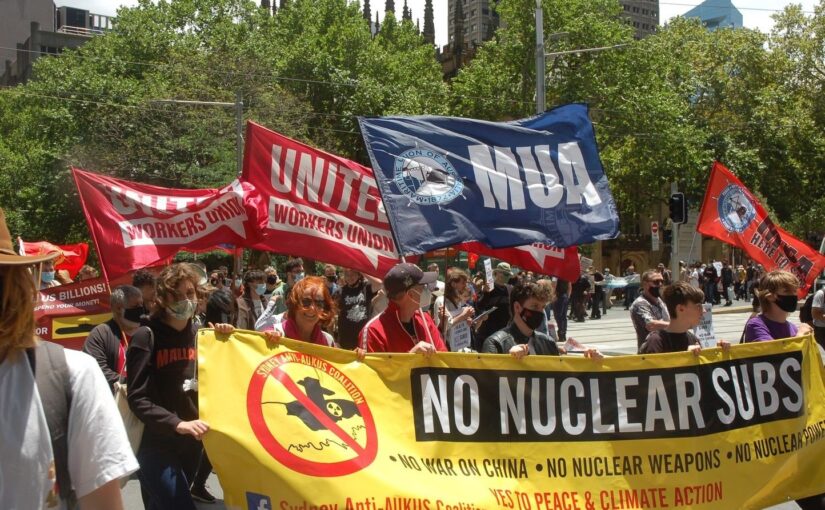 We are pleased to republish this article by Ken Stone, a leading member of Canada’s Hamilton Coalition To Stop The War, explaining the geopolitics of the AUKUS pact and assessing the resistance to it in various parts of the world, including Australia, New Zealand, Canada, the Solomon Islands, and China. Ken explains that the crux of AUKUS is to allow Australia to take a more active and leading role in the US-led New Cold War, of which China is the principal target. To that end, the US and Britain have agreed to supply Australia with nuclear-powered submarines – a flagrant escalation against China and a clear violation of the Non-Proliferation Treaty. The article calls on the peace movement worldwide to join hands in opposing AUKUS and rejecting Cold War.

This article was first published in the Canada Files.

The AUKUS military pact, among the USA, UK, and Australia, was announced to the world last year on September 15, 2021. It doesn’t mention China by name but Ben Wallace, UK Defence Secretary, described AUKUS as a response to China “embarking on one of the biggest military spends in history… growing its navy [and] air force at a huge rate.”

While Western political elites cheered vapidly for it, support for this deal has been non-existent at the grassroots level. In Australia, labour unions have lead the fightback against this deal, while the Green Party condemns the deal. In Canada, politicians in all parliamentary parties cheered on this deal, with the opposition to the deal is being led by Canadian labour activists. China has opposed the deal firmly, while New Zealand refused to join AUKUS. Japan is one of the only countries in the region which is considering joining the deal.

The AUKUS military agreement represents the most serious escalation of military force against the People’s Republic of China by the “Anglosphere” since former US President Obama declared his “Pivot to Asia” in 2009. The “Pivot to Asia” was a de facto declaration of US intent to focus its military, political, economic, and other soft power resources to contain and weaken China, which it recognized as a rival and a threat to US world hegemony – even though China repeatedly denied seeing itself as a rival to the US and eschewed the role of world hegemon.

The main aspect of this pact was the sharing of Anglo-American nuclear technology with Australia, which purchased at least eight nuclear submarines from the USA at a cost of over $100 billion USD. However, the first of these submarines is not expected to be operational for more than a decade. None of these countries held a referendum of its citizens on forming this new alliance.