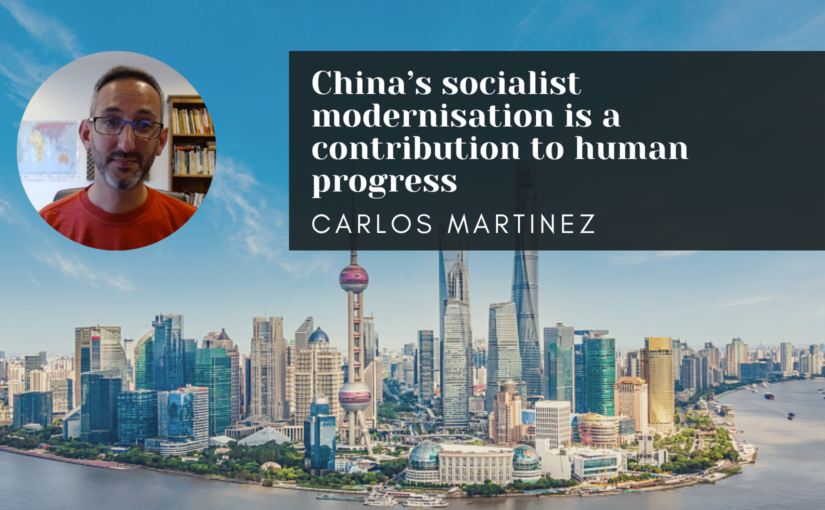 Friends of Socialist China co-editor Carlos Martinez was invited by the Chongyang Institute for Financial Studies at Renmin University of China to make a contribution at the thematic symposium on Chinese Governance and Multiple Paths of Modernization at the 5th Hongqiao International Economic Forum, held in Shanghai from 5 to 10 November, 2022.

What follows is the transcript of his remarks, in which he reviews the imperialist countries’ process of modernisation – characterised by colonial violence and plunder – and contrasts this with China’s evolving modernisation path, which is peaceful, sustainable, and based on common prosperity.

All countries have a right to modernisation. Modernisation is a process that enables higher living standards for the masses of the people. It enables common prosperity. With modernised industry, production technique, communication methods, transport systems, energy systems and healthcare methods, humanity has the potential to provide a healthy, meaningful and dignified life to everybody.

A life where each individual has reliable access to a healthy diet, to decent housing, to clothing, to education, to healthcare, to a vibrant cultural, social and intellectual life, to interesting work. In short, modernisation makes it possible to attend to people’s fundamental human rights.

What China has shown the world is that there is more than one path to modernisation.

For a long time, the predominant ideology – particularly in the West – has affirmed that the only path to modernisation is the one laid down by the imperialist powers.

And what does that path look like? Countries such as the United States and Britain claim that the secret of their success was the combination of free-market capitalism and a system of Western-style parliamentary democracy.

However, there are plenty of countries in the developing world that have attempted to apply that formula and that have achieved little more than chaos.

Indeed, the reality of the West’s path to modernisation looks profoundly different to the picture that has been painted. The industrial revolution, carried out first in Britain, was built to a significant degree on the profits of colonial plunder and the slave trade.

Britain accumulated extraordinary wealth from its colonial ventures in Ireland, India, the Caribbean, the Americas, Africa and elsewhere – not to mention the profits from forcing opium on China, a project so lucrative that Britain went to war multiple times in order to protect it.

It was British, Spanish, Portuguese and French ships that took captured African slaves to the Americas to be worked to death in the plantations, producing sugar, cotton and tobacco for the world market.

Karl Marx famously wrote in Volume 1 of Capital: “The discovery of gold and silver in America, the enslavement and entombment in mines of the aboriginal population, the beginning of the conquest and looting of the East Indies, the turning of Africa into a warren for the commercial hunting of black-skins, signalled the rosy dawn of the era of capitalist production.”

This is the ugly truth of European modernisation. And the story is not so different in the United States. The so-called founding fathers of that country were slave-owners, and they established a slave-owners’ society. They went to war against the indigenous tribes and against Mexico in order to expand their territory.

In the 20th century, having established their domination over the Americas, they constructed a neocolonial global system that is still in place to a significant degree, imposing American hegemony on the world.

This is the global system of violence that has facilitated and accompanied imperialist modernisation.

Furthermore, the benefits of this modernisation have been distributed vastly unequally. The wealthy in the US, Britain and elsewhere live an incredibly ‘modern’ life, but there are hundreds of thousands of homeless people; tens of millions that will have to choose between heating and eating this winter; tens of millions that don’t have access to healthcare.

China has also been modernising. China’s modernisation starts in 1949 with the founding of The People’s Republic, the early construction of socialist industry, nationalisation of the land, and the provision of education and healthcare services to the whole population.

In 1963, Premier Zhou Enlai first raised the question of the Four Modernisations: of agriculture, industry, defence, and science and technology. With the launch of reform and opening up in 1978, China accelerated its pursuit of those goals, and ushered in an era of rapid development of the productive forces and improvement in the people’s living standards.

China’s journey of modernisation has evolved again in recent years with the pursuit of the second centenary goal: of building a great modern socialist country that is prosperous, strong, democratic, culturally advanced, harmonious and beautiful by 2049.

China’s modernisation, however, is a socialist modernisation. It’s distinct from the capitalist model of in several important ways:

This evolving, peaceful, sustainable and fair modernisation constitutes a valuable contribution to our collective human understanding, and shows that there is more than one path to modernisation.

But this did not come about by accident.

China’s ongoing process of socialist modernisation is therefore an inspiration and a valuable lesson to progressive and peace-loving people the world over. 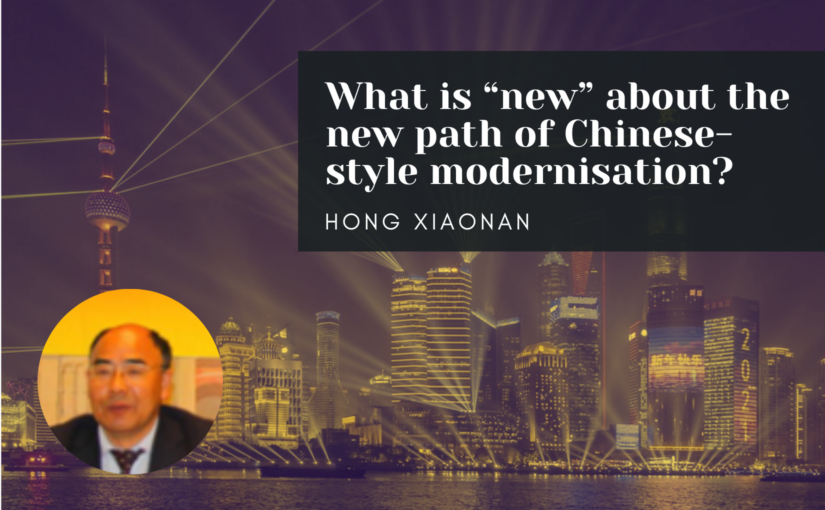 We are pleased to publish this paper by Hong Xiaonan, Dean of the School of Marxism at China’s Dalian University of Technology (DUT), part of our occasional series of selected presentations from the Cloud International Workshop on ‘New forms of human civilization from a world perspective’, held by the School, October 29-31, 2021.

In his paper, Professor Hong argues that Chinese-style modernization is new in five aspects. It is mega-scale; is one where the entire population enjoys common prosperity; where material and spiritual civilization are in harmony; where humanity and nature co-exist in harmony; and that follows the path of peaceful development. In a few words, it is socialist modernization and modernization for developing countries.

Professor Hong outlines the stages of modernization theory, through the paradigm of “America First”, the emergence of capitalist and socialist camps headed respectively by the United States and the Soviet Union, the wave of decolonization and national liberation movements, through to the emergence of Chinese-style modernization.

The author notes that General Secretary Xi Jinping pointed out that China’s modernization means that more Chinese people than the population of all developed countries combined would enter the ranks of modernization. By way of comparison, the pre-18th century rise of the Netherlands, Portugal and Spain, with a combined population of about one million, was at best equivalent to the rise of a county in China today.

He compares China’s modernization, aimed at “the all-round development of human beings”, to the western model, which is “entirely oriented towards the logic of capital, with the market economy as the only driving mechanism. This inevitably leads to an ever-greater division between rich and poor… Western capitalist modernization was constructed on the foundation of primitive accumulation, in terms of blood-soaked colonial plunder external to capitalist countries and ruthless exploitation of the people within these countries. As Marx observed… ‘capital comes [into the world] dripping from head to foot, from every pore, with blood and dirt.’… The British ‘Enclosure Movement,’ the United States’ ‘Westward Movement,’ and the criminal slave trade are all examples of the ‘original sin’ of Western capitalist modernization.”

In contrast, Professor Hong echoes Xi Jinping’s words in his report to the 19th Party Congress, in pointing out that China’s modernization, “offers a completely new option for those countries and peoples in the world that want to accelerate development while maintaining their independence.”

Once again, we are grateful to the DUT translation team and to Professor Roland Boer for their work to make this important paper available in English.

Modernisation as a world historical process reflects the tremendous changes that human society has undergone from traditional agricultural societies to modern industrial societies. This process began in Western Europe, expanded across North America and the rest of Europe, and spread to Asia, Africa, and Latin America. The study of the theory of modernisation emerged in the 1950s and 1960s, with the main academic fronts in the United States, West Germany, Japan, and other countries. The object of this research concerned the newly independent post-war countries, that is, the developing countries of the Third World. The task was to examine the new paths, strategies, and models for the development of these new countries. Generally speaking, Western research on modernisation began as a sub-discipline, mainly using theories and methods from different Western disciplines such as sociology, economics, political science, and psychology to construct theoretical frameworks so as to analyse and compare the modernisation of non-Western developing countries and to conduct field research.

After the Second World War, the new scientific and technological revolution in the Western capitalist world brought about rapid development of the productive forces and rapid growth of the capitalist economy, which not only quickly healed the wounds of war in the capitalist world, but also strengthened the confidence in Western civilisation, which had for a time been lost as a result of the economic crisis and war. In particular, through the Second World War, the United States leapt ahead to become the centre and leader of the Western capitalist world. Many Western scholars, including some in the United States, were filled with a sense of novelty and admiration for the United States, creating the illusion of “America first” and arguing theoretically for the superiority and rationality of the Western capitalist system. In terms of this background, research on the emergence of modern society began to flourish in a number of universities in the United States, and from this research the so-called “modernisation theory” – or to be precise, “Western modernisation theory” – gradually took shape.