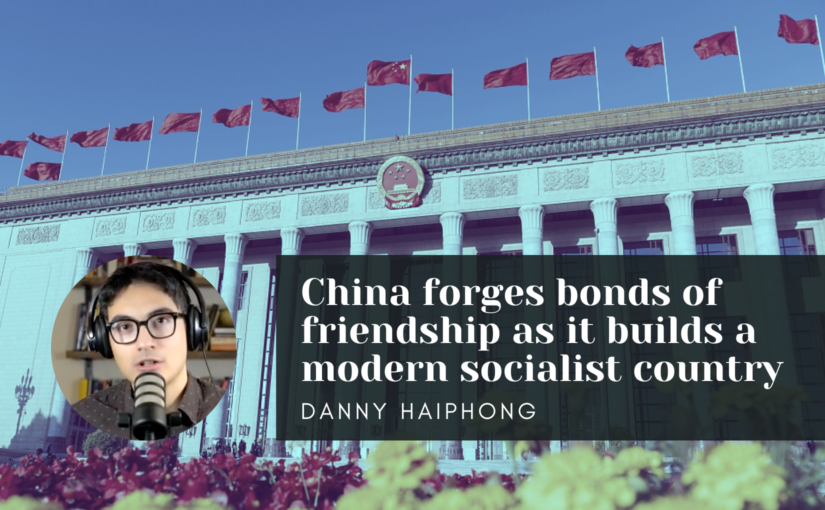 Co-editor of Friends of Socialist China Danny Haiphong places the historic meeting between Nguyen Phu Trong, general secretary of the Communist Party of Vietnam (CPV), and Chinese President and CPC general secretary Xi Jinping in the context of the US’s ongoing trajectory of decline. He argues that while China is forging deep bonds of solidarity with socialist countries, the US is committing errors that will only strengthen China’s model of cooperation as a global alternative for oppressed nations.

This article originally appeared in CGTN.

Among the most heralded of China’s achievements over the past five years since the 19th CPC National Congress has been the eradication of extreme poverty and the successful management of the COVID-19 pandemic. For the world’s largest economy, the United States, the overall picture is far less hopeful. While China is making history, the U.S. appears doomed to repeat it.

Nowhere is this more definitive than in the differences between China’s and the U.S.’s approaches to foreign policy and global cooperation. The first political leader to visit China following the 20th CPC Congress was Nguyen Phu Trong, general secretary of the Communist Party of Vietnam (CPV). Despite numerous efforts of the U.S. to mobilize Vietnam and the broader Asia Pacific against China, the visit sent a strong message of regional unity.

END_OF_DOCUMENT_TOKEN_TO_BE_REPLACED 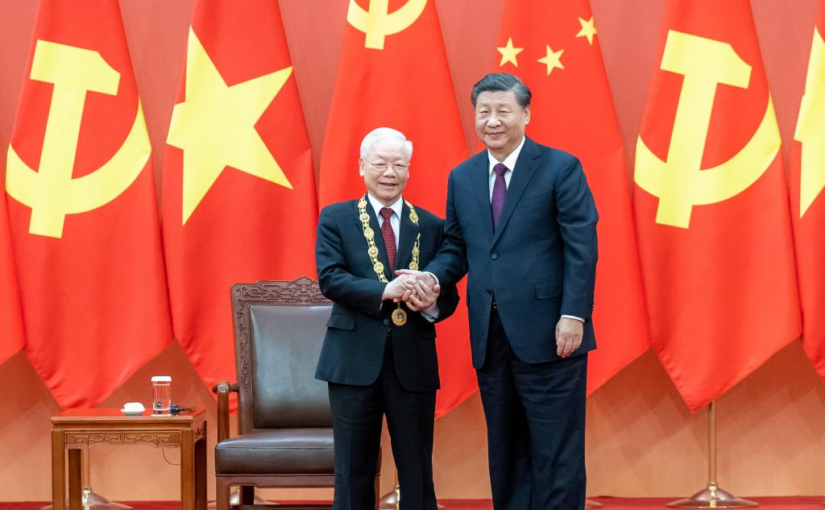 The visit by the Vietnamese General Secretary Comrade Nguyen Phu Trong was marked by exceptional warmth, signaling a qualitative advance in the relations between the two neighboring socialist countries. Besides being the first foreign leader to visit China after the Congress, it was Trong’s first overseas trip since his own re-election as general secretary at his party’s 13th National Congress in early 2021. At that time, he promised that his first visit would be to China, reciprocating Xi Jinping’s first overseas visit being to Hanoi after the CPC’s 19th Congress in 2017.

Leading Chinese newspaper Global Times commented: “China and Vietnam are two socialist countries and the ruling parties of the two countries have deep and long-standing relations with revolutionary tradition built in the era they fought side by side against foreign invaders and colonialists, so the bilateral ties of the two countries are always guided by the inter-party relations between the CPC and the CPV… For some time, some Western media and observers have tried to hype the disputes and competition between China and Vietnam. The US in the past few years has also tried to rope in Vietnam to join the US strategy to contain China, but Nguyen’s visit just once again proves that the West has failed to understand and interpret the ties between China and its neighbor.”

Besides paying attention to diverse areas of bilateral cooperation – with 13 cooperation documents signed by the two sides – along with regional and international issues, the visit was notable for the strong emphasis placed by both sides on the importance of their joint commitment to the defense and promotion of the cause of socialism.

At their meeting, Xi Jinping noted that the development of human progress is a long and tortuous process, while the development of socialist countries is facing a very complicated international environment and severe risks and challenges. He called on the CPC and the CPV to strive for the happiness of the people and the progress of humanity, make every effort to advance socialist modernization, and never allow anyone to interfere with their progress or any force to shake the institutional foundation of their development.

Xi Jinping also awarded his Vietnamese counterpart with the Friendship Medal, China’s highest decoration for foreigners. In doing so, he hailed Trong as a staunch Marxist, and a close comrade and sincere friend of the CPC. The medal represents the friendly feelings of the CPC and the Chinese people toward Trong and the Vietnamese people, symbolizes the profound friendship between China and Vietnam as “comrades and brothers”, and embodies the ardent hope of the two parties and the two peoples for a better future together, said Xi.

Noting China and Vietnam are good neighbors and friends “connected by mountains and rivers, as close as lips and teeth,” Xi said the two countries are like-minded comrades and partners with a shared future committed to the cause of peace and progress of humanity.

On the journey of promoting socialist modernization of the two countries, the CPC is willing to work with the CPV led by Trong to inherit the traditional friendship created and carefully cultivated by Mao Zedong, Ho Chi Minh and other older-generation leaders of the two parties and two countries, and to jointly lead China-Vietnam relations to achieve greater development.

In a joint statement released by the two countries at the conclusion of the visit, the two sides again agreed that the traditional friendship of being both comrades and brothers, which has been built and cultivated by President Ho Chi Minh, Chairman Mao Zedong and other senior leaders, is a valuable asset of the two peoples, which should be further inherited, protected and promoted well. It further noted the importance of the consistent and creative application and development of Marxism-Leninism in promoting the cause of Party building and socialism, so as to constantly develop and make efforts for the cause of peace and progress of humanity.

The following articles were originally carried on the website of China’s State Council and by the Xinhua News Agency and the Vietnamese party newspaper Nhân Dân.

The two sides agreed to consolidate the traditional friendship, strengthen strategic communication, enhance political mutual trust, and properly manage differences, so as to push the China-Vietnam comprehensive strategic cooperative partnership in the new era to a new level.

Xi warmly welcomed Trong’s official visit to China following the 20th CPC National Congress, noting that he has maintained close communication with Trong in various ways and reached many important consensuses on guiding the development of China-Vietnam relations in recent years. “These consensuses have been fully implemented and remarkable results have been achieved,” he said.

END_OF_DOCUMENT_TOKEN_TO_BE_REPLACED 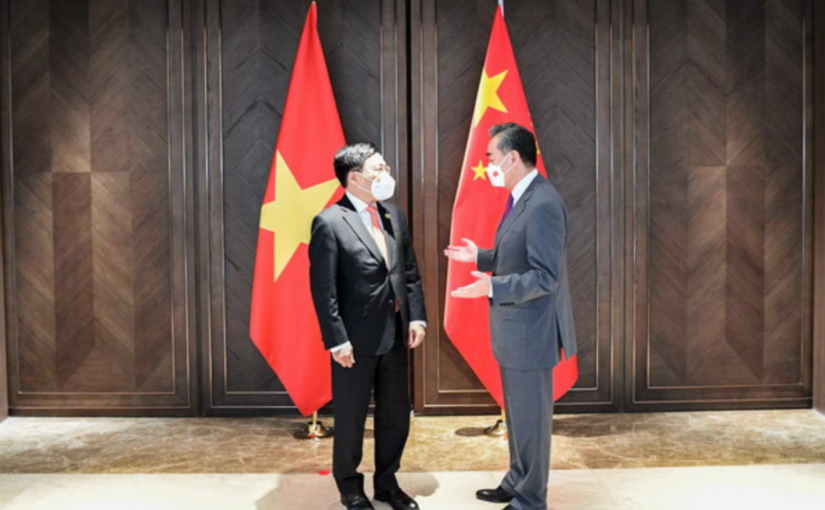 Citing the two countries special friendship, Wang Yi said that their two parties should “provide strong theoretical support for the development of the socialist cause of the two countries.”

Pham Binh Minh said, “China and Vietnam are brotherly and friendly neighbors with the same socialist cause, and also comprehensive strategic cooperative partners. Vietnam sticks to the leadership of the Communist Party of Vietnam and the path of socialism, and pursues an independent, all-round and diversified foreign policy. Relations with China are the top priority of Vietnam’s foreign policy, and it’s Vietnam’s strategic choice to develop friendly relations with China.”

The next day, Wang Yi held the Sixth Meeting of the China-Cambodia Intergovernmental Coordination Committee via video link, together with Cambodian Deputy Prime Minister Hor Namhong. Wang noted that next year will see the 65th anniversary of the establishment of diplomatic relations between China and Cambodia, and added:

“China and Cambodia have built a community with a shared future under the guidance of high-level exchanges, strengthened solidarity and mutual assistance with the goal of safeguarding common interests, deepened mutually beneficial cooperation in a people-centered approach, and strengthened multilateral coordination and collaboration with the purpose of championing international fairness and justice, thus consolidating political mutual trust and cementing the foundation for strategic cooperation. Facts have proved that the building of a China-Cambodia community with a shared future serves the fundamental and long-term interests of the two peoples, meets the trend of the times, and conforms to the big picture of peace and stability in the region, thus representing a completely right direction.”

The following reports were first carried on the website of the Chinese Foreign Ministry.

On July 13, 2022, the 14th Meeting of the China-Vietnam Steering Committee for Bilateral Cooperation was held in Nanning, Guangxi Zhuang Autonomous Region. The meeting was co-chaired by State Councilor and Foreign Minister Wang Yi and Vietnamese Standing Deputy Prime Minister Pham Binh Minh, and attended by officials in charge of relevant ministries, commissions, and local governments from both sides in an online and offline format.

Wang Yi said, General Secretary Xi Jinping and General Secretary Nguyen Phu Trong have maintained strategic communication to steer bilateral relations. All departments of both sides have made joint efforts to continuously push for new progress in practical cooperation. This year, both China and Vietnam have important domestic political agendas. It’s important to strengthen coordination in a holistic approach, and make joint efforts in the direction of building a strategic community with a shared future. Facing the risks and challenges on the way forward and the arduous tasks of reform and development, we should inherit and carry forward the special friendship, consolidate solidarity and mutual trust, and deepen mutually beneficial cooperation, so as to serve respective national construction and development, and make greater contributions to peace, stability and prosperity in the region.

END_OF_DOCUMENT_TOKEN_TO_BE_REPLACED 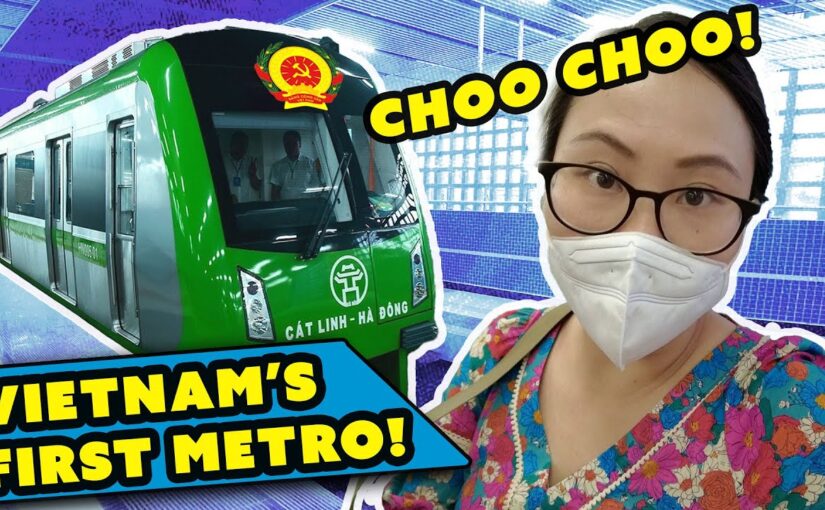