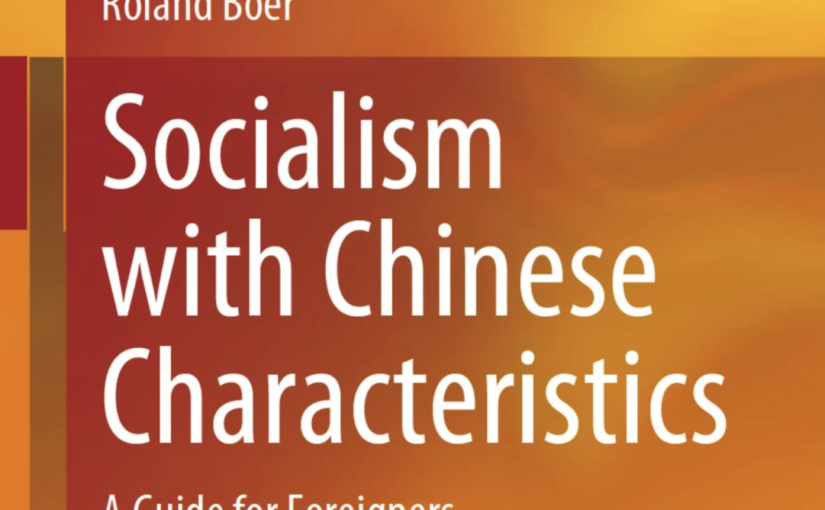 Ever since the reform and opening-up from 1978, and especially during the last few decades, China has often been portrayed as an economic and a political hybrid: an officially socialist country which has, under the aegis of its Communist Party and its leaders’ continuing declarations of allegiance to Marxism and building socialism, embraced two key components of capitalist systems: private ownership over the means of production and a market economy. For many, this hybridity is also an insoluble contradiction which, similar to the classical liar paradox, involves a range of mutually invalidating opposites lining up with popular understanding of ‘authentically’ Marxist/socialist/communist economic and political values, practices, etc., and respectively ‘authentically’ capitalist/liberal/neoliberal values, practices, etc. Overall, the reasoning goes that if China is truly socialist and if its Communist Party sincerely adheres to Marxism (as its theoretical and practical guide for building socialism and eventually communism), then introducing practices typical of capitalism constitutes a betrayal of Marxism (or deviation from it) and introduction of capitalism. Based on this essentialising dualistic logic, China has become ‘state capitalism’, ‘bureaucratic capitalism’, ‘capitalist socialism’, ‘neoliberalism/capitalism with Chinese characteristics’, ‘crony capitalism’, ‘red capitalism’, and many other capitalisms. Many of these ‘capitalist’ qualifications come from non-Marxists and are often just poorly veiled attempts to reassert Thatcher’s ‘there is no alternative’ slogan and Fukuyama’s ‘the end of history’ thesis. Unfortunately, many Marxists, especially in the West, also succumb to the trap of dualistic social ontology in thinking about China. The glaring fault in their approach: disregard for the basic Marxist method, more concretely, dialectics, which involves understanding reality, including the reality of socialism, as the constant development of contradictions and their resolutions through sublation.

Socialism with Chinese Characteristics challenges the simplistic mutually exclusive dualistic lens through which socialism in China is often viewed and judged. Truthful to its title, the book is a guide to Chinese socialism, both comprehensive and incisive, although not so much for foreigners as for those who lost sight of Marxist dialectics as theory, analytical method and most importantly, as a framework and guide for social practice. For others, who like myself, grew up and lived in a socialist country, reading Socialism with Chinese Characteristics is a journey simultaneously familiar and new: familiar in recognising the language of specifically socialist Marxism and new regarding the ways it has been applied in Chinese circumstances.

It is not easy to provide a short overview of Boer’s book. It has ten chapters (each one with many sections and subsections) which aim to provide comprehensive answers and explanations to many different questions one can ask about modern China. Some are more theoretical, other more factual, but all of them draw on a variety of strands involving history, Marxism, politics, law, linguistics, etc. The book covers what some might consider the ‘big’ issues such as the Marxist basis for the reform and opening up, the introduction of private ownership and market economy (chapters 4 and 5), the theoretical foundations and practical functioning of Chinese socialist democracy (chapters 8 and 9) and ideas about sovereignty and human rights and their practical applications (chapter 7). In dealing with these ‘big’ issues, however, a number of other questions are also clarified, such as the status of minority nationalities and their involvement in the democratic process (section 8.5), the meaning of ‘legal system’ and ‘rule of law’ (subsection 8.6.1), the role of the Party and the role of the government (subsection 9.6.2), views on globalisation (subsection 10.4.8), etc. Every chapter also involves quotes and references from Chinese sources, which include works and speeches by Party leaders (Mao Zedong, Zhou Enlai, Deng Xiaoping, Xi Jinping), documents from congresses and conferences and an incredible number of Chinese Marxist philosophers, political scientists, economists, etc., most of which are unfortunately unknown outside of China. The book also includes explanations of Chinese words, expressions and characters which are part of the Chinese Marxist discourse, such as shishiqiushi (seeking truth from facts) (32), datong (unity, togetherness, harmony) and xiaokang (moderately well-off, healthy, peaceful and secure) (chapter 6), baquan (hegemony) (256), etc.

The way in which all of this versatile material is woven together and presented is clear and accessible, but the book is far from being a simple descriptive journey as one would expect from a ‘guide’. It is also a deeply analytical work which in order to highlight the distinctiveness of Chinese Marxism and the complexities of building socialism involves careful reading of Chinese textual material (and their squaring up with actual practice), frequent comparisons with Soviet and Western Marxism and Western liberal thought, constant moving between the past and the present, zooming in on details and zooming out to the big picture and frequent expositions about how described practical aspects fit in with Chinese Marxist discourse. In this sense, reading through Socialism with Chinese Characteristics is not an easy ride. There is breadth and depth to it which requires constant focus and, most importantly, also an open mind and readiness towards accepting reconfigured, sometimes in a completely new way, well-known Marxist ideas and concepts.

The picture of ‘socialism with Chinese characteristics’ that emerges from this intense journey is of a vibrant, dynamic and complex society which is in constant development and in a critical dialectical dialogue within itself and with the rest of the world. Indeed, if I were to summarise what ‘socialism with Chinese characteristics’ entails without doing grave injustice to its complexity, it would be that it exemplifies Marxist dialectics in real action. Dialectics was the force behind the reform and opening up (chapters 2, 3, 4, section 5.3) and it is still the dominant theory and method that informs and shapes development of Chinese socialism (section 1.2 and chapter 10). What differentiates Chinese Marxist dialectics, however, from Marxist dialectics in the classical sense is that it is referential to Chinese history and conditions (subsection 1.3) and that its primary focus is not anymore on contradictions arising from capitalism, but on resolving contradictions that arise in socialism, that is, in a post-revolution social reality where, as Marx would say, the expropriators have already been expropriated (section 3.4 and subsection 4.5.1). In other words, this is a type of socialist/socialistic dialectics whose main concern is development of socialism as concrete social, economic and political practice.

Dialectics is the dominant theme of the book, but the key to understanding specifically Chinese socialist(ic) dialectics and appreciating the intricacies of Chinese socialism and its functioning are the first four chapters because most of the ideas they deal with are, with an ever-growing complexity, further elaborated in the rest of the book. In the introduction, Boer explains the role Marxism plays in China, what is specifically Chinese about it and a number of liberal and Western Marxists’ (mis)representations of Chinese socialism, which Chinese scholars and Boer view as inadequate and methodologically faulty since they try to understand China from the perspective of Western history, Western intellectual traditions and Western Marxism. The second chapter discusses Deng’s two principles (liberating thought from dogmatism for the purpose of liberating the forces of production, and seeking truth from facts as the basis of the Marxist method) that were instrumental for the move from strictly planned to mixed planned/market economy. The third chapter presents ‘contradiction analysis’ or dialectical materialism as it was developed in the Soviet Union, namely, the understanding that contradictions continue in socialism albeit in non-antagonistic form, and its application in Chinese conditions. Finally, the fourth chapter explains the reasons for the reform and the opening-up via contradiction analysis in a series of opposites such as collective/individual, equality/difference, revolution/reform, self-reliance/globalisation and their recalibration within the Chinese socialist economic and political context. From here, the book turns to an extremely detailed discussion of more concrete aspects of Chinese socialism, such as the economy, socialist modernisation, sovereignty, human rights and democracy, ending with an exposition of Xi Jinping’s thought. What all of these chapters clearly demonstrate is the firm footing of Boer’s claim from the introduction, namely, that Marxism is at the core of Chinese socialist project, although, as mentioned before, this is Marxism that is primarily referential to and applicable to problems arising in socialism.

Does Boer’s book deliver on the promise to ‘redress the lack of knowledge’ about the concept and practice of socialism with Chinese characteristics? It certainly does and more so. For those who wonder whether China is still socialist or suspect that Chinese Communist Party abandoned Marxism, the book provides a lot of material on which to base their answers. In fact, anyone who wants to engage seriously and extensively with ‘socialism with Chinese characteristics’ should read the book. As for me, I never doubted that China is socialist. What Socialism with Chinese Characteristics did for me was to reaffirm that communism is indeed ‘the riddle of history solved’, which I began to doubt after the Yugoslav and the Soviet disaster, and to rekindle the hope that the world will come to that solution sooner rather than later. China wants to lead towards achieving this aim by example and Boer’s book certainly shines a very bright light on the ins and the outs of that example.

Tamara Prosic is a Senior Researcher with the School of Philosophical, Historical and International Studies, Monash University, Melbourne, Australia.