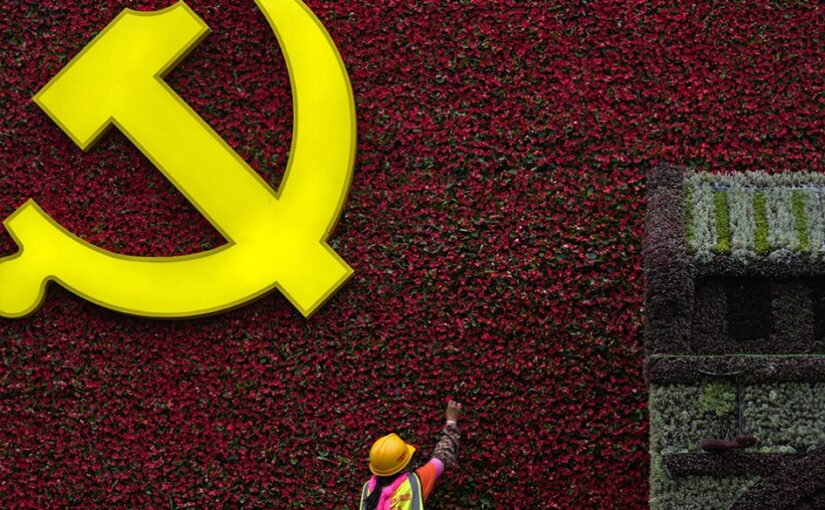 We are republishing this article by Friends of Socialist China co-editor Carlos Martinez, which originally appeared in the Morning Star on 18 June 2021. It is the third in a series of articles about the history of the Communist Party of China, which celebrates its centenary on 1 July 2021.

To this day, the most popular method for casually denigrating the People’s Republic of China and the record of the Communist Party of China (CPC) is to cite the alleged crimes of Mao Zedong who, from the early 1930s until his death in 1976, was generally recognised as the top leader of the Chinese Revolution.

After all, if the CPC was so dedicated to improving the lot of the Chinese people, why did it engage in such disastrous campaigns as the Great Leap Forward (GLF) and the Cultural Revolution?

The GLF, launched in 1958, was an experimental programme designed to achieve rapid industrialisation and collectivisation; to fast-track the construction of socialism and allow China to make a final break with centuries-old underdevelopment and poverty; in Mao’s words, to “close the gap between China and the US within five years, and to ultimately surpass the US within seven years.”

In its economic strategy, it represented a rejection of Soviet-style urban industrialisation, reflecting the early stages of the Sino-Soviet split. The Chinese were worried that the Khrushchev leadership in Moscow was narrowly focused on the avoidance of conflict with the imperialist powers, and that its support to China and the other socialist countries would be sacrificed at the altar of peaceful coexistence. Hence China would have to rely on its own resources.

The plan for the GLF centred on the modernisation of agriculture, introducing irrigation and modern machinery, breaking down the barrier between town and country by producing some of that machinery in small-scale village factories, and trying to develop productivity — and a socialist spirit — through collectivisation and the formation of people’s communes.

There was a heavy voluntaristic aspect to the campaign; a broad appeal to the revolutionary spirit of the masses. Ji Chaozhu (at the time an interpreter for the Ministry of Foreign Affairs and later China’s ambassador to Britain (1987-91) notes in his memoirs: “Cadres were to join the peasants in the fields, factories, and construction sites. Even Mao made an appearance at a dam-building project to have his picture taken with a shovel in hand.”

Mao considered the countryside would once again become the “true source for revolutionary social transformation” and “the main arena where the struggle to achieve socialism and communism will be determined.”

The attempt to develop small-scale rural industry was, in the main, unsuccessful. And with millions of peasants drafted into the towns to work in factories, there were too few hands available for reaping and threshing (Alexander Pantsov writes that the “battle for steel had diverted the Chinese leadership’s attention from the grain problem, and the task of harvesting rice and other grain had fallen on the shoulders of women, old men and children.)

Furthermore the GLF coincided with a series of terrible droughts and floods. Adding to the troubles was the fact that, in 1960, the Sino-Soviet split came out into the open and the Soviets hurriedly withdrew their technical advisers.

The result of all this was a contraction in agricultural output, and a consequent deepening of poverty and malnutrition. Liu Mingfu writes that “the Great Leap Forward did not realise the goal of surpassing the UK and US. It actually brought China’s economy to a standstill and then recession.

Certain of the GLF’s goals were achieved — most notably the irrigation of arable land. However, overall it failed to meet its objectives and was accompanied by several harmful side effects. It was called off in 1962.

For anti-communists, the GLF provides apparently incontrovertible proof of the monstrous, murderous nature of the CPC — and Mao Zedong in particular. Western bourgeois historians have settled on a figure of 30 million for the estimated number of lives lost in famine resulting from the GLF.

On the basis of a rigorous statistical analysis, Indian economist Utsa Patnaik concludes that China’s death rate rose from 12 per thousand in 1958 (a historically low figure resulting from land reform and the extension of basic medical services throughout the country) to a peak of 25.4 per thousand in 1960.

“If we take the remarkably low death rate of 12 per thousand that China had achieved by 1958 as the benchmark, and calculate the deaths in excess of this over the period 1959 to 1961, it totals 11.5 million. This is the maximal estimate of possible ‘famine deaths.’”

Patnaik observes that even the peak death rate in 1960 “was little different from India’s 24.8 death rate in the same year, which was considered quite normal and attracted no criticism.”

This is an important point. Malnutrition was at that time a scourge throughout the developing world (sadly it remains so in some parts of the planet). China’s history is rife with terrible famines, including in 1907, 1928 and 1942. It is only in the modern era, under the leadership of precisely that “monstrous” CPC, that malnutrition has become a thing of the past in China.

In other words, the failure of the GLF has been cynically manipulated by bourgeois academics to denigrate the entire history of the Chinese Revolution. The GLF was not some outrageous crime against humanity; it was an unsuccessful experiment designed to accelerate the building of a prosperous and advanced socialist society.

In the aftermath of the GLF, Mao’s more radical wing of the CPC leadership became somewhat marginalised, and the initiative fell to those wanting to prioritise social stability and economic growth over ongoing class struggle. Principal among these were Liu Shaoqi (head of state of the PRC, then widely considered Mao’s likely successor) and vice-premier Deng Xiaoping.

Mao and a group of his close comrades began to worry that the deprioritisation of class struggle reflected an anti-revolutionary “revisionist” trend that could ultimately lead to capitalist restoration.

As Mao saw it, revisionist elements were able to rely on the support of the intelligentsia — particularly teachers and academics — who, themselves coming largely from non working-class backgrounds, were promoting capitalist and feudal values among young people. It was necessary to “exterminate the roots of revisionism” and “struggle against those in power in the party who were taking the capitalist road.”

Such worries laid the basis for the Cultural Revolution.

One thought on “A century of the Communist Party of China: the Great Leap Forward”