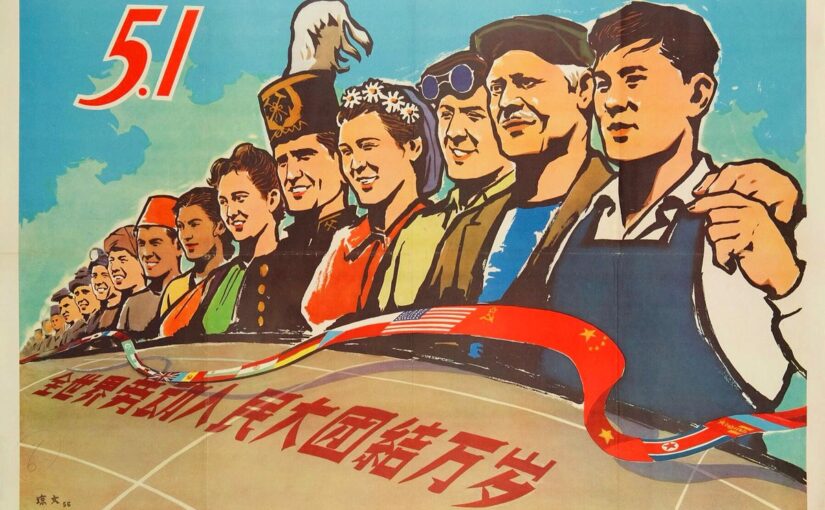 The following is the text of a speech given by Keith Bennett at a recent webinar hosted by the Morning Star and Friends of Socialist China to celebrate the centenary of the CPC. Keith shines a light on the CPC’s history of internationalism and the different forms this has taken over the years.

On behalf of Friends of Socialist China, we are pleased to join our friends and comrades of the Morning Star in celebrating the 100th anniversary of the founding of the Communist Party of China. The role of the Morning Star is becoming ever more vital in opposing the new cold war and in defending and supporting China.

Friends of Socialist China is a new platform based on supporting the People’s Republic of China and spreading understanding of Chinese socialism. We have a website and a presence on Facebook, YouTube and Twitter. Our first webinar, held last Saturday on the theme of ‘China’s Path to Zero Poverty’, was watched live by several hundred people and featured speakers from China, Pakistan, India, Nigeria, Bolivia, Britain and the United States.

The Communist Party of China is the world’s most important political party. With more than 95 million members, leave alone the hundreds of millions more organised in diverse mass organisations upholding the party’s leadership, its membership is greater than all the other communist and workers parties in the world, and all other political parties professing a commitment to socialism, combined.

The CPC is a Marxist political party. It leads the world’s most populous country and the world’s second (or according to at least one method of calculation first) largest economy. China is a permanent member of the UN Security Council and today, be it international financial crisis, global pandemic, the looming threat of climate change or regional hotspots, no major issue facing humanity can be successfully tackled without China’s active and constructive input.

The centenary of the CPC is, therefore, or at least ought to be, an occasion for celebration not only for the Chinese people but also for all socialists, anti-imperialists and progressive people throughout the world.

The CPC has from its inception been an internationalist party.

It represented the striving of Chinese patriots to find a viable way to save the people and rejuvenate the nation.

There is, of course, room for discussion on the later part played by the Comintern in the Chinese revolution, but the founding of the CPC is surely inseparable from its support and assistance. The CPC’s early and rapid growth and development, in particular during the period of the first united front between the CPC and the Guomindang from 1924-27, also owed an enormous amount to the Comintern’s all-round assistance and advice.

In turn, the Chinese revolution was also intimately connected with the revolution in neighbouring countries in particular.

It was above all the heroic, and extremely costly, in terms of millions of casualties, resistance of the Chinese people to Japanese aggression from as early as 1931 that ensured that the USSR never had to fight on two fronts at once in the anti-fascist world war.

The leaders of the Vietnamese and Korean revolutions, Ho Chi Minh and Kim Il Sung, both spent an important part of their revolutionary careers in China. And, in keeping with the general practice of the international communist movement at the time, both became CPC members during that period of their lives.

On October 1st 1949, Chairman Mao declared the founding of the People’s Republic of China with the immortal words: “The Chinese people have stood up.”

Joining the Soviet Union’s victory in the Great Patriotic War, and the establishment of people’s democracies in central and eastern Europe, this marked a decisive shift in the world balance of forces in favour of socialism, people’s democracy, national independence and peace.

But just one year later, China was at war again. US imperialism’s vicious war in Korea posed a direct threat to China and not only of a land invasion. The increasingly unhinged US General MacArthur actually proposed the dropping of atomic weapons on all the major cities of both China and the Soviet Union. It was no easy thing for the fledging People’s Republic, faced with overwhelming problems of poverty and backwardness, and devastated by decades of turmoil, invasion and war, to decide to confront US imperialism head on. The mobilisation of the vast Chinese People’s Volunteer Army, as a result of Chairman Mao’s bold strategic decision, and commanded by Marshal Peng Dehuai, in the war to resist US aggression and aid Korea; to safeguard peace and defend our homes, not only turned the tide on the Korean peninsula. It arguably prevented a land invasion of China and certainly made a massive contribution to ensuring that a pro-US regime was not installed on China’s northeastern border, about 1,000 kilometres from Beijing and facing into its then industrial heartland.

But the cost and scale of sacrifice was enormous. Above all, in hundreds of thousands of casualties, including Chairman Mao’s own son, Mao Anying, who lies buried in Korean soil. Besides, the US sent its seventh fleet into the Taiwan Straits, preventing the complete liberation and reunification of China, and imposed a crippling economic embargo that was to last until 1972.

In my view, part of the special character of the Chinese revolution lies in that it is both a socialist revolution led by a Marxist-Leninist party and simultaneously an anti-imperialist revolution in a semi-colonial country of a ‘people of colour’, who constitute the overwhelming global majority. I think this still carries tremendous significance in a world that to a considerable extent remains characterised by Lenin’s definition of one divided into a small number of oppressor nations on the one hand and a great mass of oppressed nations on the other.

Hence the concept of a united front against imperialism, in one form or another, has always been intrinsic to the foreign policy of the People’s Republic.

The first time this was clearly displayed on the world stage was at the first African-Asian Conference held in Bandung, Indonesia, in April 1955, where China’s then Premier and Foreign Minister Zhou Enlai played a leading role, stressing unity and cooperation, and setting aside differences, even though at the time the majority of independent countries present were yet to establish official relations with the PRC.

In the previous year, Zhou Enlai had initiated the Five Principles of Peaceful Coexistence together with the leaders of India and Burma. With their stress on mutual respect for sovereignty and territorial integrity, non-aggression and non-interference in internal affairs, and equality and mutual benefit they represent the antithesis of the imperialist approach to international relations.

Through the 1960s and 1970s, in particular, China actively and militantly supported anti-imperialist struggles around the world.

Most significant was the massive support it extended to the peoples of Vietnam, Laos and Cambodia in their struggles against the brutal US war of aggression. More than 300,000 Chinese troops were committed to Vietnam, where they enabled more Vietnamese fighters to join the frontline in the south by defending and rehabilitating the railways and manning the anti-aircraft defences of major cities like Hanoi and Haiphong in the north.

The Communist Party of China also at that tine extended significant support to other communist parties, such as those of Burma, Thailand and Malaya, that were waging their own people’s wars. And China also extended considerable support to the national liberation movements in Algeria, Palestine, Guinea Bissau, Oman, Mozambique, Zimbabwe, Namibia and numerous other countries. In his autobiography, Long Walk to Freedom, Nelson Mandela recalls how he sent Walter Sisulu to China as far back as 1954 to secure support for the anti-apartheid struggle.

China also began its foreign aid programmes when it was still itself a very poor country. China’s medical assistance to Africa, which continues to this day, began with the dispatch of 100 healthcare workers to Algeria in 1963, very shortly after that country gained its independence from France. Between 1970-1975, China built the Tazara Railway, together with Zambia and Tanzania, to enable Zambia to freely export its copper, breaking its economic dependence on white-ruled Rhodesia and South Africa. The construction cost was in excess of US$2.7 billion in today’s value.

Significantly, recipients of Chinese aid included countries which then had much higher standards of living than China. For example, in 1975, China built the popularly known Red China Dock in Malta, the largest dry dock in the Mediterranean, after the progressive government of Dom Mintoff expelled the British military base and embraced non-alignment.

After Mao’s death in 1976, the leadership around Deng Xiaoping placed overwhelming emphasis on domestic economic development.

In personal discussions with Chinese comrades over those ensuing years, I was repeatedly told that a stronger and more prosperous China would be able to make a much greater contribution to people throughout the world in the future.

Today, I think we can more clearly see what this means.

Consistently deploying a strategy of multilateralism and multipolarity, China is steadily laying down the building blocks of a genuinely new international political and economic order through such means as the BRICS grouping, Shanghai Cooperation Organisation, the Forum on China-Africa Cooperation, and similar mechanisms with, for example, the countries of East and Southeast Asia, Latin America and the Caribbean, and Central and Eastern Europe, the Asian Infrastructure Investment Bank and above all the Belt and Road Initiative.

Whilst China does not interfere in others’ affairs or seek to export revolution, as Fidel Castro and Hugo Chavez both recognised, China is today the most indispensable external factor for countries seeking to defend their independence and build socialism. And as Comrade Xi Jinping put it at the 19th Party Congress in October 2017: “The path, the theory, the system, and the culture of socialism with Chinese characteristics have kept developing, blazing a new trail for other developing countries to achieve modernisation. It offers a new option for other countries and nations who want to speed up their development while preserving their independence.”

One does not have to agree with China on everything to appreciate, especially having experienced the loss of the Soviet Union, that the loss of the People’s Republic of China would be an unmitigated disaster not only for the Chinese people but for any people who today seek to defend their independence and build a new society.

And to say that the CPC has always been an internationalist party does not mean that one has to consider that all of China’s policies and actions have always been correct. Life is certainly a lot more complicated than that.

We could discuss who bears the primary responsibility for the Sino-Soviet split. But what seems beyond dispute to me is that it was, along with the collapse of the USSR and the European socialist bloc to which it is intimately related, the greatest tragedy and misfortune to befall the international communist and workers movement, whose negative consequences we are still experiencing.

That is why, and especially in the context of the New Cold War, it is so important to support and defend the People’s Republic of China today.

In November 1989, faced with the events in Eastern Europe, Deng Xiaoping observed to Tanzanian President Julius Nyerere: “So long as socialism does not collapse in China, it will always hold its ground in the world.”

In today’s world I think we can see even more clearly the correctness and farsightedness of this statement.

It is in that spirit that we celebrate the 100th anniversary of the founding of the Communist Party of China.

Thank you for your attention.

One thought on “The internationalism of the Communist Party of China”