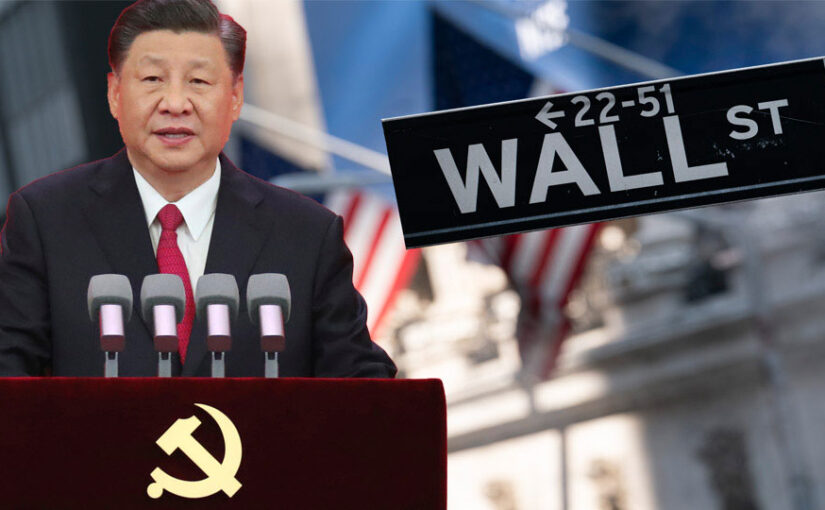 This important article by CJ Atkins, originally published on 25 August 2021 in People’s World, discusses the reasons for the recent wave of government regulation in China.

Shareholders beware, socialism is back.

That’s the warning being sounded by stock market analysts and financial advisors to anyone parking their money in Chinese tech stocks. Behind the investor panic is a stepped-up regulatory campaign by the Communist Party of China that aims to combat inequality, lower living costs for working families, impose order on often chaotic markets, and prevent monopoly control over key sectors of China’s economy.

President Xi Jinping told the world in July that China’s leaders were determined to “safeguard social fairness and justice and resolve the imbalances and inadequacies in development” to solve what he called “the most pressing difficulties and problems that are of great concern to the people.”

Xi was speaking to a local crowd at the CPC’s centenary celebration in Beijing; most Western media treated his remarks as just another propaganda speech: heavy on socialistic verbiage but nothing to be all that concerned about.

But many may now be rereading his words for clues as to what might be coming next. That’s because over the last several months, Chinese authorities have embarked on what many in the international investor class see as a full-fledged assault on their wealth—a class struggle salvo aimed directly at them.

“Reckless capital expansion is over”

No less than 50 different regulatory actions have been executed against dozens of different firms for a range of offenses and lapses—price gouging, false advertising, monopolistic exploitation, failure to protect users’ data privacy, and more. Calculations made by The Economist magazine estimate that government enforcements have chopped at least $1 trillion from the share prices of the various companies involved, exacting a big hit on investors’ portfolios.

Given the dizzying pace of legislation, some in the Western business press have resorted to old-school anti-communist rhetoric to criticize the government. The right-wing journal National Interest claims “Xi Jinping’s personal dictatorship” is destroying all of China’s capitalists and decimating the wealth of many outside the country.

Other outlets have been slightly less hysterical, preferring a more sophisticated style to deliver a similar message. The Wall Street Journal, flagship paper of the U.S. financial establishment, warned in a July 27 editorial that Xi is on a mission “to bring ever greater swathes of China’s private economy under the state’s control.”

Alan Song, founder of private equity firm Harvest Capital, speaking to Reuters, lamented last month that “a new era that prioritizes fairness over efficiency” has unfortunately begun in China. “Chinese entrepreneurs and investors,” Song said, “must understand that the age of reckless capital expansion is over.”

Lately, the prime exhibit for the China-is-destroying-capitalism accusation is the set of regulations targeting private after-school tutoring firms, which were forbidden last month from seeking foreign capital, forced to cut their operating hours, and obligated to make big chunks of their business into non-profit organizations.

The restrictions, the government says, will save families money and rescue children—who often spend just as much time at tutoring sessions as they do in school—from classroom burnout. Tutoring is a $120-billion industry, and the Ministry of Education plans to beef up public schools to take its place for K through 9 students while also reducing the burden of homework weighing down kids in China. (And also, the government hopes, reduce the costs of child-rearing and help reverse declining birth rates.)

In the wake of the changes, some of the top Chinese tutoring companies listed on the U.S. stock market—names like TAL Education, New Oriental, and Gaotu Techedu—saw their share prices plunge up to 90% almost overnight. Billions were wiped out, leaving a lot of investors shocked and angry.

In another example, online insurance sellers have been ordered to halt illegal marketing and pricing practices that bilked workers out of their hard-earned yuan. According to the Shanghai Securities News, the state wants to “purify the market environment” and “protect the legal interests of consumers.”

As of last year, some 146 insurance companies had entered the so-called “insurtech” sector in China, hawking health insurance, life insurance, property insurance, and all manners of coverage online. Many unlicensed companies also rushed to make fast cash in the sector, which saw high double-digit expansion. Banking regulators have given companies until the end of October to clean up their act, or else.

And when it comes to online shopping and social media, the National People’s Congress just passed a new Personal Information Protection Law that will force companies like e-commerce giant Alibaba, tech conglomerate Tencent, Tik Tok owner ByteDance, and others to obtain consent before collecting people’s data and follow strict new requirements to keep it safe.

From zero to one hundred

Tutoring, insurance, and data privacy are just chapters in a much bigger story of government action against unchecked private economic power.

For the beleaguered investor class, the tale of their suffering begins with the supposed martyrdom of Jack Ma, founder of Alibaba. Last fall, Ma was planning the initial public offering (IPO)—the first public sale of shares—for Ant Group, his company’s fintech spin-off. Ant was anticipated to be the largest IPO in history, with possible valuations of up to $37 billion being floated.

At a meeting in Shanghai connected to the IPO, Ma laid into China’s financial regulatory system, saying it was outdated and stifled innovation. He called for an overhaul. In the months that followed, Ma got what he asked for, if not in the form he wanted.

The tech CEO had called for liberation of banks and lenders; instead, the government has answered with measures aimed at protecting consumers from reckless financial practices and a crackdown on poor management of people’s personal data. Ma took to ground and hasn’t been heard from much ever since.

Investors reacted to this injection of “government-fueled uncertainty” into the market in a predictable fashion: sell-off. The tech-heavy Nasdaq Golden Dragon Index, an exchange-traded fund of U.S.-listed Chinese stocks, has lost over 41% of its value in the past six months. And as for the IPO of Ant Group? Indefinitely postponed.

Although many bourgeois commentators are eager to denounce China as “crazy” for undermining its own domestic tech companies with such strenuous legislation, what they fail to see is that rather than destroying its economy, the government is laying the basis for sustainable and, hopefully, more equitable growth.

Essentially, when it comes to regulation of the online and tech space, China is going from zero to one hundred in under ten seconds. In most countries, the high-tech sector has for years been growing faster than legislation can keep up, becoming more complex by the day and defying the efforts of regulators to manage it in a way that protects society. China is no different; new developments in AI, finance, and more all advance quicker than the laws that govern them. The current campaign is intended to rectify that shortcoming.

China has no intention of crippling or crushing the tech sector; the government knows it is a hub for the innovation and growth that will be needed to keep China economically successful in the 21st century. (So U.S. competitors shouldn’t salivate too much.) The Chinese state also knows that contain-and-control measures are needed to make sure tech serves society rather than society being held hostage by tech. If the financial wellbeing of some investors’ portfolios is the price of achieving that goal, then the government of China seems willing to pay.

Another motivation behind the new measures is to prevent China from ending up in a situation like the U.S., where giant tech companies have already achieved monopoly market power and heavily influence government policymaking. Amazon, Google, Microsoft, Facebook—they’ve all become powerful enough to influence elections, buy legislation, and crush any possible challenges to their position. The Communist Party of China appears determined to never allow China to be subject to the whims of Alibaba, Didi, ByteDance, and the rest in a similar way.

For years, smug commentators ridiculed the “socialist market economy” formulation that China uses to describe its hybrid economic model. Critics on the left say you can’t have socialism if there is a market, while critics on the right argue there’s no such thing as a free market when socialist policies are involved. The two sides were joined in the belief that the CPC claim of building a “socialist market economy” was just political cover for a ruling elite determined to quietly retreat from communist ideology.

The current regulatory wave should prompt a second look at such notions, however accurate they might have seemed in the 1990s or 2000s. The determination of Xi Jinping and the Chinese government to “pursue common prosperity” is looking pretty serious these days. And there’s probably more to come: The CPC Central Committee and the State Council just released new guidelines for a five-year plan for the “construction of a government under the rule of law.” Translation: Expect more regulation.

But even if one doesn’t subscribe to socialist notions, there is a way of seeing the current government moves as being good for business, too. The smart capitalists, if they can admit it, should know that these rounds of regulation are actually beneficial for them as a group. The anarchy of competition under the market system has always meant that it’s not in any single capitalist’s interest to look out for the health of the system as a whole. Instead, it has always been the state which has to do that.

Right now, that process is happening fast in China, and it’s costing a lot of people a lot of money. But in the long term, these measures will ensure stronger rule of law and protect the system from both reckless firms and the “too-big-to-fail” problems that persistently plague Western capitalism from one recession or depression to the next. It will also protect working people from some of the tech sector’s most exploitative business practices.

China is laying the foundation for a healthier mixed economy that will be less prone to economic crisis. And for the long, long term, China’s leadership is making it clear that all its talk of Marxism and socialism are more than just political window-dressing.