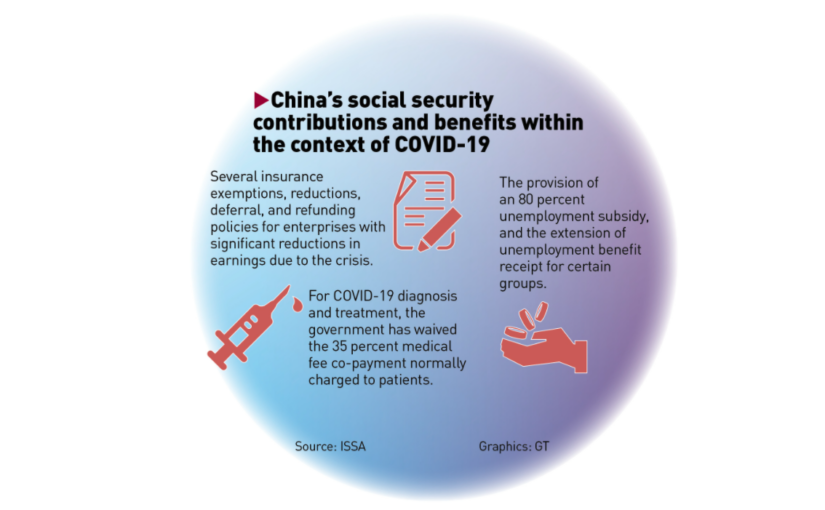 Fu’s father lost one leg in a car accident and his mother has poor eyesight. The family is categorized as an “insured low-income household,” a type of poor household that receives the minimum living guarantee from the government.

Although Fu’s family enjoys assistance from the local government and villages in normal times, the epidemic made the situation more difficult as all people in the country were encouraged to stay at home during the anti-epidemic days back in winter, 2020.

However, the problem turned out not to be so bad as the government offered what Fu described as “extra care” to take care of them during the outbreak.

“They came to see us from time to time and brought food, thick quilts and coats despite the epidemic,” he said. “That really touched me and made me realize how much they cared about us in such a difficult situation.”

Fu’s family receives a government allowance of more than 2,000 yuan ($310) every month as well as a disability allowance of 300 yuan for each of them three from the civil affairs authorities.

He said the allowance enables the family to live comfortable as the main expenses are medical treatment, which can be 70 to 80 percent covered by the rural medical insurance the village helps them pay for.

The government also provides price subsidies and material support, including oil, rice, vegetables and milk, to Fu’s family during festivals and other special occasions.

“Without government support, our lives would have been very, very difficult,” he told the Global Times.

Fu is just one of millions of families whose lives were challenged by the COVID-19 epidemic and who always felt the risk of falling back into poverty and being left behind, but his story also shows that China has maintained administrative capacity and institutional adaptability in crisis management and emergency responses, while also demonstrating its strong social security system in withstanding the unprecedented health crisis.

Moreover, COVID-19 has also provided a once-in-a-generation opportunity to learn from and improve on existing policies to be resilient against future crises.

Li Tao, deputy head of the National Healthcare Security Administration, also said that other costs related to COVID-19 vaccinations will also be shared by medical insurance funds and finance.

This is just a microcosm of the continuous improvement of China’s strong social security system. In addition to free vaccination, there are many vivid cases in recent years showing how China’s social security system has woven a “safety net” for its people – 1.36 billion people are covered by basic medical insurance during the 13th Five-Year Plan period (2016-20), with the coverage rate staying above 95 percent; nearly 1 billion people were covered by basic pension insurance; parts of state capital have been transferred to the social security fund.

In the battle against the coronavirus, not only did China mobilize national resources to aid the places most in need, but the comprehensive social security system also played its role, Lu Quan, associate professor at the Social Security Research Centre at Renmin University of China, told the Global Times. Lu is also secretary general of the China Association of Social Security.

The system not only helps the vulnerable to deal with risks related to the epidemic, but it also acts as a buffer and kick starter when it comes to resuming production and economic activity, Lu noted.

According to Lu, medical insurance solved patients’ and their families’ concerns on spending, which also stopped people from having to cover up their infections due to spending reasons, which otherwise may have ruined the epidemic control effort.

While lockdowns posed great difficulties for people who live hand-to-mouth, the relevant authorities offered temporary aid for such groups to overcome the difficult time, he said.

The social security fees reduction helped small and medium-sized companies secure their heavily impacted cash flow during the peak of the epidemic, so that they could be an active element after business resumed, providing jobs and easing social security pressure, Lu added.

A report published in April 2020 by the International Social Security Association (ISSA), the world’s leading international organization for social security institutions, government departments and agencies, concluded that six major elements that can be identified as emergency measures that helped guarantee the basic livelihood of workers and citizens during the COVID-19 fight in China: waiving, lowering, deferring, refunding, subsidizing, supporting.

The report said that since February 2020, small and medium-sized businesses and sole-proprietorship enterprises in China have been eligible for exemption from employer contributions to old-age, unemployment and work-injury insurance schemes for up to five months. For larger enterprises, employer contributions to the old-age, unemployment and work-injury insurance schemes can be reduced by 50 percent for up to three months.

Enterprises with significant reductions in earnings due to the crisis have been allowed to postpone the payment of social insurance contributions for up to six months without any penalty. Micro, small- and medium-sized enterprises, which account for around 90 percent of total employment, have been eligible for a refund of unemployment insurance contributions if they limit layoffs.

For COVID-19 diagnosis and treatment, the government has waived the 35 percent medical fee co-payment that patients normally pay. Social security benefits were enhanced, for unemployed people in particular in China. This included the provision of an unemployment subsidy of up to 80 percent of the unemployment benefit amount for those who have exhausted their unemployment benefit entitlement, and the extension of unemployment benefit receipt for people within one year of retirement until their retirement.

Analysts noted that the US healthcare system is often considered the most developed in the world. According to the Global Health and Security Index released in 2019, the US ranked first with a score of 83.5. However, rankings don’t tell the whole story as its technological and financial advantages in healthcare, as well as its disadvantages in accessibility and equity failed to convince the public in the health crisis.

Many reports showed medical staff who tested positive for COVID-19 were forced to continue working and, in some cases, severely ill COVID-19 patients would be sent to special rooms to wait to die.

Social security is closely related to a country’s political system. As China is a socialist country, the government will continue to be the robust provider of social security and will offer reliable protection amid crises, while commercial and third-party service providers will be integrated to form a multi-pillar and sustainable system, Lu said.

Since the founding of the People’s Republic of China, especially since the reform and opening-up period, China’s social security system has grown from scratch and has gradually improved.

Since the 18th National Congress of the Communist Party of China, a series of major reform measures in the field of social security have been promoted, making China’s social security system more stable and sustainable.

Experts on economic and medical insurance said the establishment of this administration is a huge advance for the country’s social security system as it lowers the price of medicine, provides more aid to the public and implements more sound management of the sources of medicine and avoids arbitrary charges.

The most notable characteristic of China’s social security system is that it focuses more on people living in extremely poor areas. By the end of 2020, 60.98 million registered poor residents were covered by the pension system, with 4.3 billion yuan being paid to them by the government.

Analysts predicted that the security system will be more stable in future as the country’s 14th Five-Year Plan (2021-25) and the outline of the long-term goals for 2035 adhere to the principle of ensuring that all social security benefits are guaranteed, and aim to accelerate the improvement of a fair, unified and sustainable multi-tiered social security system that covers the whole population and balances urban and rural areas in accordance with the requirements of helping those in need.