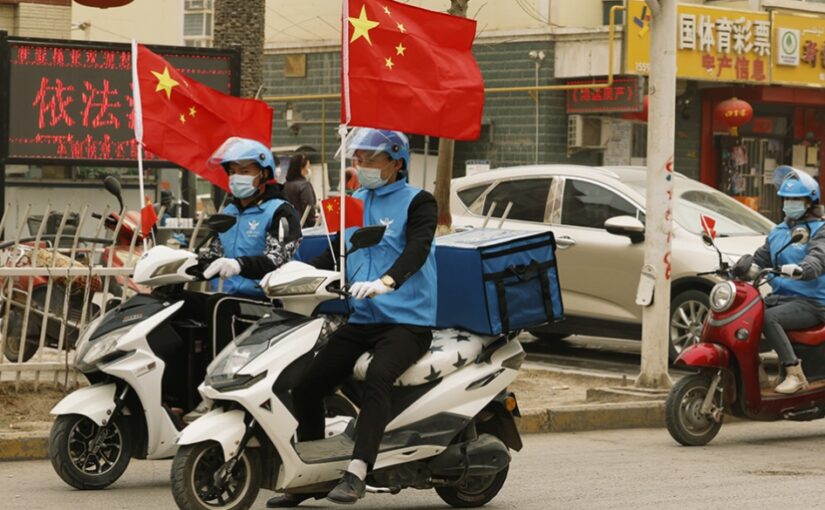 This very useful editorial in the Morning Star challenges the recent reports about a purported police defector ‘Jiang’, who claims to have witnessed human rights abuses perpetrated against Uyghur people in Xinjiang. The story is “spectacularly telegenic”, but its authenticity is highly questionable.

The new cold war on China has an essential ideological front in order to shape Western public opinion.

It has captured the headlines on an international scale over the past seven days, not least on Sky News today.

Someone claiming to be a former police officer in China’s Xinjiang Autonomous Region, claimed in a silhouetted interview that he had witnessed, heard of or participated in deadly beatings, sexual torture and inhuman treatment of prisoners in police stations and internment camps.

The alleged ex-police officer, known only as “Jiang,” said he was sent to Xinjiang after 10 years’ service elsewhere to do his patriotic duty combating terrorism.

But his participation in the mistreatment of Uighur Muslim detainees — all of whom he believes to be innocent — disgusted him so much he fled to Europe.

The impression was given that this was a Sky News exclusive, although “Jiang” had previously recorded a three-hour interview broadcast in part by CNN a week earlier.

This had contained even more lurid allegations than those featured in the Sky News report, including a claim by “Jiang” that it was “a very common measure” of torture and dehumanisation for guards to order other prisoners to rape and abuse new male inmates.

Yet there is nothing much new in this story that could possibly merit the enormous coverage given to it from the US to Britain and from India to Australia.

Ex-detective Jiang, as he is presented, gave much the same testimony to the public hearings of the self-styled “UK tribunal to investigate China’s alleged genocide and crimes against humanity against Uighur, Kazakh and other Turkic Muslim populations.”

On that occasion, however, when asked by one of the inquiry panellists on June 7 whether he knew of any sexual harassment or rape against prisoners, he had replied: “Well, it is a topic I never liked to discuss, therefore I never made any inquiry regarding this.”

By the time of his interviews broadcast by CNN on October 4 and Sky News on October 11, he displayed exceptionally detailed knowledge of what had supposedly been going on without his participation or direct observation.

Almost as curiously, “Jiang” is usually filmed in a pristine police uniform with insignia indicating that he was a “city leader” with the Xinjiang police. This is a rank that in every other known case has only been achieved by serving officers after many more than 10 years’ service.

Even more odd is the apparent need to disguise the identity of “Jiang.” It would surely not be too difficult for the Chinese authorities to uncover the identity of a former city leader of police in Xinjiang, transferred there after 10 years’ service, and who no longer lives in China.

As a dramatic device, however, an interviewee in mask and silhouette retailing the anti-China atrocity stories organised by far-right institutes, Western-funded bodies such as the World Uighur Congress and fanatical anti-communist Christian fundamentalists such as Adrian Zenz, is an ideal one.

It is spectacularly telegenic, while the content of the allegations is lucrative copy for newspapers and websites almost everywhere except in China, where the authorities have always disputed the veracity and motives of this enormous ideological campaign.

The Chinese government and Communist Party insist that in their struggle to overcome a serious separatist, racist and terrorist threat in Xinjiang — for which abundant evidence exists — they have had to take sweeping security measures. But they deny authorising or tolerating torture in any form.

As we know in the US, Britain, France and other countries, police officers can grossly abuse their powers. The role of the mass media is to investigate and expose such abuse, not unquestionably regurgitate unsubstantiated allegations from tainted sources.