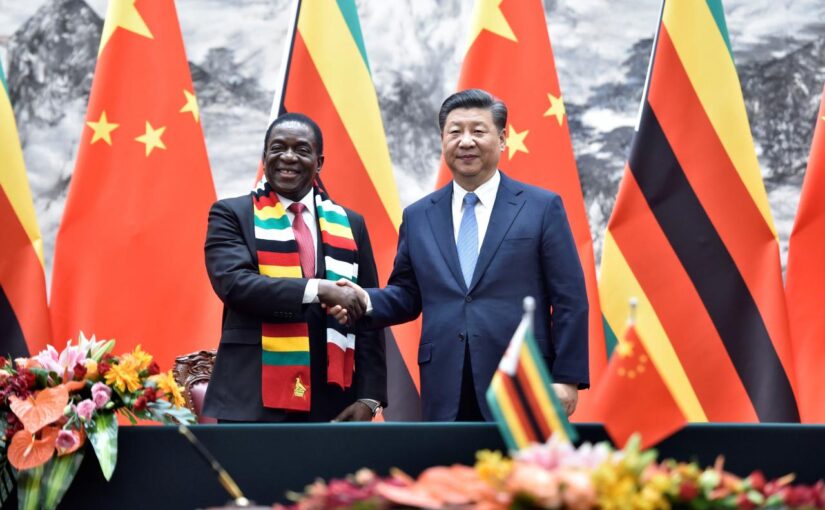 We are pleased to republish this editorial from The Herald, Zimbabwe’s most widely-distributed newspaper, addressing recent revelations that the US State Department has been sponsoring journalists to spread disinformation about Chinese investments in Zimbabwe. The article notes that China was a friend to the Zimbabwean people throughout their liberation struggle, and was the first country to formally recognise independent Zimbabwe in 1980. China has remained an all-weather friend and supporter of Zimbabwe, in a period when the US and its allies have pursued economic and political destabilisation.

Never be used against China by the United States

Revelations that the United States and some Western countries are engaged in sponsoring the media, labour unions, civil society and lawyers to fight Chinese investments in Zimbabwe, although hardly surprising, are most unfortunate.

It is understandable that the US is especially feeling the heat of a rising China, which is now the world’s second largest economy, and breathing down hard on the former sole superpower.

One can draw an analogy of a proud and boastful student in a school classroom, who realises that there is a strong competitor and begins to throw tantrums, afraid of competition and losing bragging rights.

The irony is that some diligent students, just want to learn and achieve.

China is like that diligent student: she committed to bettering and improving herself as a nation and people through modernisation and reform, which have resulted in its current status.

Unlike the boastful US, though, China is not interested in dominating the world and would rather belong to a global commonwealth of shared values.

China’s cooperation with Africa and Zimbabwe never attaches political or economic strings. China never threatens other countries to exchange their resources for aid. China’s investments in Zimbabwe are not opportunistic.

Chinese interests in Zimbabwe are born out of a long history, dating back to pre-modern times and these were cemented during Zimbabwe’s liberation struggles of the 1960s and 70s.

China was the first country to establish diplomatic relations with the newly-independent nation of Zimbabwe in 1980.

When Zimbabwe had problems with Western countries, which saw the latter imposing punitive sanctions after the land reform programme in 1980, China came to the rescue, as Zimbabwe predicated its Look East Policy on good relations with China.

Now, 20 years later, the policy refined by President Mnangagwa’s “Zimbabwe is Open for Business” the relationship has blossomed and bearing fruit seen in the number of Chinese investments and aid to the Southern African country.

China is not the biggest creditor of Zimbabwe, but the biggest source of foreign direct investment (FDI) in Zimbabwe, worth millions of dollars. Big projects in mining and construction are set to change the face of the country forever creating thousands of jobs across value chains.

This will better the lives of Zimbabwean people, in line with Government’s wish to uplift citizens within the matrix of achieving the Upper Middle Income Economy status. This is the real “People’s Lives Matter”.

This is something that has to be admired and applauded by all people of goodwill.

China has earned its place as an all-weather friend of Zimbabwe.

The angst of Western countries, led by the US is vexatious.

Their sanctions on Zimbabwe have also inadvertently hurt them, taking away economic opportunities in the resource rich country (and, oh, Zimbabwe has wonderful human resources too!).

As such, the attempts to smear the image of China and its investors in Zimbabwe is an act of jealousy and chicanery that must be condemned by all right thinking citizens.

It is unfortunate that some sections of the media have accepted dirty money to go on this crusade to demonise Chinese companies who are providing employment, livelihoods and paying taxes for the benefit of the nation.

Already, some of these claims have been circulating for a long time, building what is clearly a swelter of Sinophobic attitudes that are shameful in this era and age.

It is such easy game to hate Chinese people!

Various false claims are made against Chinese companies and nationals without any attempt to validate them or to give audience to the supposed aggressors.

Western countries want to perpetuate this racist and hateful behaviour in an effort to knock out China from its well-earned place in Zimbabwe.

This is regrettable. What is even more tragic is that some Zimbabweans allow themselves to be used against Chinese by the US for a few dirty pieces of silver. Maybe US$1000 is a good price for them to sell themselves and betray their own national interests!

These Zimbabweans must take a hard look at themselves.

All Zimbabweans must see who their friends and enemies are, and must know justice and fairness should not paid by money!

For what it is worth, it can be said that the US, as a fading giant, has long lost its moral compass and entitlement in the eyes of the Third World or lesser peoples.

China on the other hand has been a friend and role model, and continues to exercise measured temperament and love for humanity.

Recent events in the world, such as the Covid-19 pandemic and climate change phenomenon, have demonstrated just how the US has gone out of touch and in danger of becoming irrelevant.

Some of its outrages, at worst personified by its immediate past President, Donald J. Trump, signify the last kicks of a dying horse and they are dangerous.

Zimbabwe cannot afford to follow a corpse to the grave.

The future of Zimbabwe lies with progressive forces such as China, which under President Xi Jinping has demonstrated leadership, preponderance and magnanimity.

Zimbabwe is in a good space, to be a friend of China.

This should not be taken lightly and citizens must therefore be careful not to be misled Western puppets and anomic journalists, activists and lawyers whose palms are greasy with dirty money.

One thought on “Zimbabwe stands against anti-China propaganda”