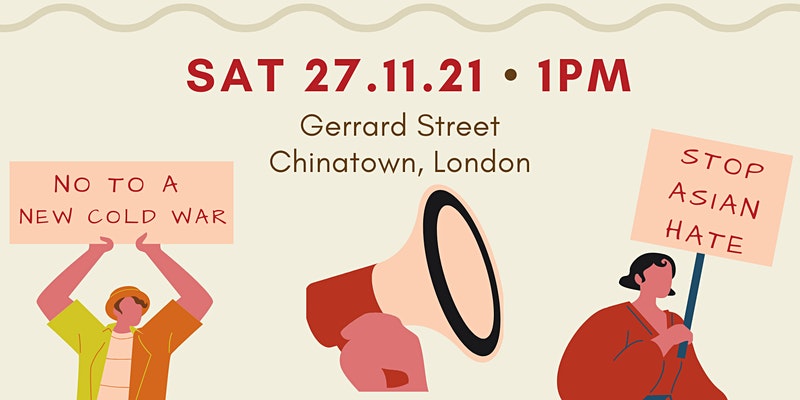 On Saturday 27 November 2021, there will be a rally in London’s Chinatown (Gerrard Street, W1D 5PT) against anti-Asian racism. We encourage those readers that live locally to attend if they can. Below is an article from the Morning Star by Dr Ping Hua providing background and details for the rally.

Racism against the Chinese community is not a new phenomenon in British society.

There were reports of race riots targeting Chinese businesses and laundries as early as 1919. At times of national disaster in the country, the Chinese community has become the scapegoat on many occasions.

For example, we witnessed a spike in racist incidents against the Chinese community during the Foot & Mouth crisis in 2001, due to the unfounded accusations that the disease was caused by a Chinese restaurant using illegally imported meat.

The causes of the racism against Chinese community in Britain have a long history. The “Chinese exclusion” sentiment in the Western society has actually existed for hundreds of years.

In the early years, as with the way the black people were treated, certain discriminating legislation against Chinese was adopted in Western countries such as Australia, Canada and the United States. which prohibited Chinese people from taking decent jobs, eating in the same restaurant with white people and in similar ways.

The situation hasn’t changed much even now. During the early days of the Covid-19 pandemic, China warned the world about the seriousness of the virus, yet most Western media instead of paying attention and educating their people about the terrible nature of the virus spread lots of rumours against China.

These pushed a narrative that “eating Chinese food will make you sick” and of “keep away from the Chinese and you will be all right.”

This kind of attack on the Chinese community was terrifying and it has had a profound impact.

Despite World Health Organisation guidelines not to racialise disease, some politicians were calling Covid-19 “a Chinese virus” and trying to deflect criticism from the British government’s failure to prepare properly for the pandemic.

There has been a huge increase in racism and racial attacks throughout the Britain against British Chinese, Chinese students and those who were wrongly identified as Chinese in East and South-east Asian communities.

Chinese restaurants have received anonymous threatening letters, shops have been targeted with racial abuse graffiti, Chinese people were alienated on public transport or at supermarkets, they were deliberately coughed at, spat at and were shouted at with racial abuse. Some have even been brutally beaten up and attacked with acid.

The situation of the Chinese community suffering hate crime has been inflamed by media misrepresentation and constant demonisation of China, particularly on social media and fuelled by irresponsible press coverage, which has translated into racist attacks on the British Chinese community and racist attitudes that have decimated Chinese businesses throughout Britain.

China has showed the world its achievement in peaceful development for more than 40 years and has lifted over 850 million people out of extreme poverty during this period.

China has become the second largest economy in the world since 2010, making the US feel uneasy about its global dominance. The US and its allies feel that China’s rise poses a threat to their global hegemony.

The US has therefore attempted to suppress China in all directions, including through trade war, a blockade on high-tech industries and a propaganda war.

It has created all kinds of appalling lies and fabrications on human rights issues. These unjustified falsehoods have resulted in a witch hunt against China, from unwarranted charges concerning Xinjiang to provocative subversion in Hong Kong, along with encouraging Taiwan’s independence in order to violently interfere in China’s internal affairs.

With regards to Taiwan, China has always advocated peaceful unification rather than using military force. Compared with Trump’s way of using Taiwan for containing China, the Biden administration not only entangled traditional allies such as Japan, Australia and Britain in attempting to “group fight” China, but also incited small eastern European countries such as Lithuania and the Czech Republic to openly challenge the One China principle.

The US government officially recognises that Taiwan is a province of China by a 1979 agreement and has promised to remove all military personnel from Taiwan. Yet, what the Biden administration is now doing — secretly sending military forces into Taiwan— is in violation of both US and international law, establishing a tripartite security partnership with the United Kingdom and Australia, and carrying out nuclear submarine co-operation exercises.

What’s more, his Secretary of State Antony Blinken blatantly issued a challenge to the UN Charter, denied UN Resolution 2758, pretended to support Taiwan’s membership in the UN and openly sent the wrong signal in support of “Taiwanese independence.”

The underlying reason for this is that China’s economy, military, technology, and other comprehensive national strength continues to rise, and its international influence continues to expand, especially since the Covid-19 pandemic last year.

China’s control of the pandemic has shown the world a successful case of strong social governance. The United States and European countries have shown the opposite in their handling of the pandemic.

This has made some anti-China forces in the West less and less confident, and they frequently play the “Taiwan card.” Exposing the anxiety of the United States, worrying that its incompetence will be seen through by the world, and fearing that China will achieve a great national rejuvenation.

That is why Chinese and East and South-east Asian communities in Britain are suffering hate crimes that have been inflamed by media misrepresentation, the constant demonisation of China and the cold war mentality of some Western countries.

China is achieving peaceful development, and has no desire to export whatever it is doing at home to the rest of the world. It does not want to compete with the US or replace the US.

We should advocate for peace and oppose any form of war, cold or hot, and should have dialogue and co-operation.

Different countries have adopted different ways to deal with the same threats, and it is the only rational way forward. No cold war, no confrontation — humanity needs more collaboration.

Join our rally Stop Anti-Asian Racism and NO to a New Cold War which will take place on Saturday November 27 from 1pm in London Chinatown.

Dr Ping Hua is an academic at the University of Southampton, co-founder of the Chinese Association of Southampton and a board member of The Monitoring Group.