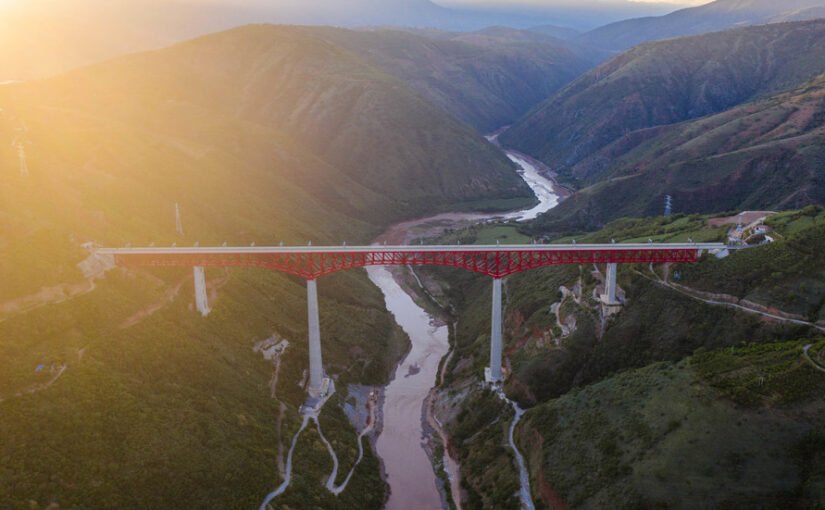 We are pleased to republish this article by Tom Fowdy, originally carried by RT. The author calls out the grotesque hypocrisy of imperialist criticism of China for having built a high speed railway to Vientiane, the capital of Socialist Laos – a small country on which the United States dropped more bombs than were dropped in the whole of World War II, killing some 10% of the population and making it the most bombed country in history.

This is the Western media’s bizarre messaging to the people of Laos, a nation that was carpet bombed by America, and which is now being vilified for accepting a new $9 billion railway line paid for by China.

Thursday was National Day in Laos, a celebration marking 46 years since the landlocked Southeast Asian nation deposed its monarchy and became a revolutionary communist state, an effort which was supported by Vietnam.

This year, the anniversary had added significance, as it saw the opening of a major new project, an electrified high-speed and freight railway system connecting the capital city, Vientiane with its northern neighbour, China.

The $9 billion project is part of the Belt and Road Initiative, and has been hailed as one of its flagship achievements. It is the first commercial and industrial railway in Laos, which, given its geography and the fact it is surrounded by mountainous terrain, has not previously had many options to expand its exports and generate economic growth.

Now, though, it has a direct rapid link into the world’s second largest economy and the world’s largest consumer market by population, and a connection to the booming ports of Guangdong. In terms of what it will bring to Laos, it is a game changer. So, what’s not to like about it?

To nobody’s surprise, the mainstream media have responded to the railway with the usual anti-China negativity. A plethora of articles sought to paint the project as a ‘debt trap’, promoting the accusation that Beijing loans countries money for projects they cannot afford and then exerts political leverage over it.

The Financial Times, for one, ran with a cynical article headlined ‘Laos to open Chinese-built railway amid fears of Beijing’s influence’. It implied that somehow Laos feels threatened or fears the construction of this very pioneering railway project (which the country’s own leader made sure he was the first to travel on). This suggestion of ‘fears of Chinese influence’ has become a common feature on such stories, which seek to cast doubt over anything positive China may be achieving or doing.

A common Twitter meme among pro-China users which has followed from stories like this asks: “but at what cost?” highlighting the frequency of such negative coverage.

And if you Google “China, but at what cost?” you can find a great many examples of articles published in major outlets. In producing such pieces, the broader intention is to depict Beijing’s actions as unwanted, threatening and constantly facing opposition. In the case of the Laos railway project, the ‘problem’ is it was financed by debt, and therefore it is not a positive step.

Yet this argument is as insulting as it is outright insensitive to Laos’ contemporary history. Anyone who knows anything about Laos’ relatively recent past will be well aware that China is not the country to fear, but the United States – the nation that dropped over 260 million cluster bombs on Laos and completely devastated the country as an extension of the Vietnam War, making it the most single bombed nation in history and claiming over 50,000 lives.

Many of these bombs remain unexploded and litter the countryside of Laos, continuing to kill civilians. In constructing the new railway, workers first had to clear the unexploded ordnance. How is it that the world and the mainstream media remain indifferent to this atrocity? And how, by any stretch of the imagination, can they claim that China is the true threat to Laos, and that the US and its allies act in the true interests of the country?

Herein lies the problem. Such a mindset symbolizes the elitism, chauvinism and self-righteousness of the countries of the West, which are ideologically inclined to believe that they stand for the ‘true interests’ of the ordinary people in the countries they profess to liberate.

Western politics peddles the assumption that through countries’ adherence to liberal democracy, they exclusively hold a single, universal, impartial and moralistic truth, derived from the ontological legacy of Christianity, and they have an obligation to introduce it to others. The West always acts truthfully and in good faith, while its enemies do not. And therefore, so the logic goes, any policy the US or its allies direct towards Laos is motivated by sincere intent and goodwill for its interests, and in turn, anything that China does is bad-faith, expansionist and power-hungry behaviour motivated by a desire to influence or control the country.

This creates the bizarre scenario whereby Beijing is depicted as evil and sinister for building a railway to connect to its neighbour – but we should forget America dropping millions of bombs on the country because it was done in the name of ‘freedom’. I’m sure you can imagine how the media would react if China did the latter.

Those who push this narrative predictably omit any insight into how Laos itself thinks about the situation. Another piece which took a similar stance, published in The Diplomat, was titled ‘Laos-China Railway inaugurated amid mounting debt concerns’.

But like the ‘fears of Beijing influence’ expressed in the FT, who are these ‘concerns’ from? The report cites the “Washington-based Center for Global Development” and what it merely describes as a “US based analyst” as sources who push the ‘debt trap’ narrative. But nowhere in any of these articles is there an actual voice direct from Laos who raises any fear of China, or objects to the railway’s existence.

Instead, they simply talk on the country’s behalf, obscuring the reality that a communist state which suffered from extreme levels of aggression from the US probably does not see its northern neighbour – and its most important economic partner – as a threat to its regime. With many more articles running variations of the same theme, there is minimal effort given to the consideration that the railway will help the country rapidly expand its exports, sustain greater growth and help Laos pay for the project.

The Laos-China railway has provided a textbook example of how the media can distort a story in order to fortify an incriminating narrative, while brushing aside brutal realities. We are shown a lopsided world, where the travesty of a country being bombed into oblivion with consequences lasting decades is ignored, and the preference is to try to convince us how that same country’s first commercial railway line is, in fact, what it should really be scared of.

It is a demonstration of how the power of the English-language, pro-US media distorts reality itself and how they can blow up an issue, yet hide the truth, by professing to care dearly about the wellbeing and interests of a country which the West poured death, destruction and carnage upon in the name of freedom.

3 thoughts on “‘The country that bombed you is your friend. The one that built your new railway is your enemy’”