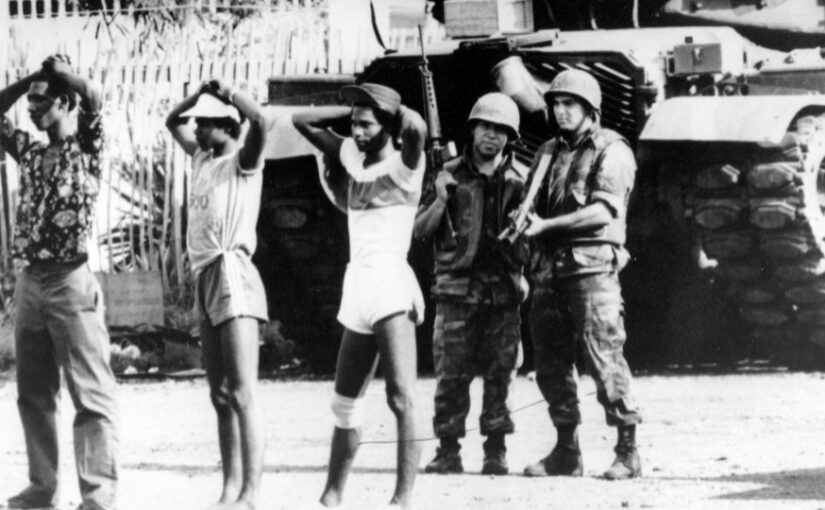 We are pleased to republish below this important article by Ian Goodrum in People’s World exposing the profound hypocrisy lying just beneath the surface of Biden’s ‘Summit for Democracy’, and discussing the realities of China’s socialist democracy.

The image above shows US soldiers holding three Grenadians prisoner during the October 1983 US invasion.

If you thought discourse in the United States couldn’t get more childish, think again: This week, the White House is convening the geopolitical equivalent of the He-Man Woman-Haters’ Club from Our Gang.

The club has an official name, of course; the Summit for Democracy, wherein U.S. President Joe Biden and 110 of his closest friends have a super-secret special meeting in their treehouse to talk about how great they are. But however hard they try to gussy it up, this affair is no different from what Spanky, Alfalfa, and Buckwheat got up to in those Hal Roach short films decades ago.

As per usual, the U.S. government has appointed itself supreme authority—this time of the dictionary. Just like “freedom” and “human rights,” we can count “democracy” as another term that’s lost all meaning after years of being trotted out by the country that cares about it the least. Because aren’t all the best democratic processes the ones where the guy with the most money and guns tells everyone what to do?

That’s only half a joke. Of the 110 supposedly willing participants in this “democracy summit,” many are host to U.S. military bases and troops. Indigenous resistance to U.S. military presence—some might say occupation—is frequently suppressed by comprador governments, who depend on American largesse to fill their coffers. This inconvenient fact, among many others, makes it hard to take this week’s charade seriously.

We might, for instance, ask Salvador Allende of Chile or Patrice Lumumba of the Democratic Republic of the Congo how the U.S. treats elected leaders who dare to espouse an alternate path for their people—if the CIA hadn’t masterminded their assassinations. Even when countries follow the U.S. model, if the results don’t favor U.S. interests those who get elected tend to find themselves staring down the barrel of a gun. Or lately, fleeing their homes as “color revolutions” facilitate the installment of new, more amenable leadership.

Some may complain these examples are old, from the height of the Cold War. But removal of inconvenient leaders, most of them socialists, by the American military-intelligence complex didn’t stop after the Soviet Union ended in 1991—and it’s naïve to believe otherwise. Notably absent from the hallowed list of this week’s “democratic” participants are Bolivia, Venezuela, and Nicaragua. These three Latin American countries have regularly scheduled multiparty elections, but because those elections put left-wing governments into power that oppose U.S. hegemony, they are decried as illegitimate, and their leaders as dictators.

It should come as no surprise these countries’ poor treatment in the press comes with protracted efforts to overthrow their leadership; to cite only two examples, former Venezuelan President Hugo Chávez survived an ouster in 2002 and Bolivia’s Evo Morales was deposed in a fascist coup in 2019 before returning the following year when his party won back the presidency. These anti-democratic moves, just like their Cold War antecedents, were cheered on by the same media that now purports to be defenders of freedom, democracy, and human rights.

So it’s not even about U.S.-style democracy in the abstract. It’s about whether a given “democracy” benefits the U.S. economically and politically. We see this in the summit invitations extended to Israel, a country presiding over a regime of brutal apartheid against Palestinians; Brazil, where judicial shenanigans remove leftist leaders or block their candidacies; and India, where state-supported pogroms on Muslims go unnoticed to ensure participation in U.S.-led military alliances. As with so many things where America is concerned, geopolitical expediency trumps any imaginary commitment to principle.

How popular can the U.S.’ brand of “democracy” be if its existence requires enforcement at gunpoint or, at the very least, the toeing of a particular line? How many countries in the world would, if given the choice, willingly submit to a “rules-based order” that has kept them under colonial and neocolonial domination for decades? Since a global majority names the U.S. as the greatest threat to world peace, the answer isn’t hard to imagine.

But these run-of-the-mill hypocrisies only scratch the surface. There’s a much deeper issue underpinning U.S. “democracy” and all its contradictions, and it’s one Marxists have known about for some time. As Vladimir Lenin said in State and Revolution, “The oppressed are allowed once every few years to decide which particular representatives of the oppressing class shall represent and repress them.” He was paraphrasing Karl Marx and writing over 100 years ago, but those words are as true as they’ve ever been.

Whatever form it takes, under capitalism democracy is little more than a pantomime show. It’s an instrument of class rule, one which provides a vehicle for more efficient exploitation. But all the smoke and mirrors in the world can’t obscure this fundamental fact, and the American people know it on some level—even if they don’t articulate it in those terms.

Is it, after all, a democratic right to live in poverty? To work multiple jobs and barely keep your head above water? To worry over being one of the millions evicted amid a still-raging pandemic?  Is it a democratic choice to decide between risking one’s life at work or one’s livelihood in unemployment or debt peonage?

Nearly 800,000 people in the U.S. have had even those meager “rights” stripped from them, as their democratic government elected to let them die. This is what critics of countries like China don’t understand: You could hold an election every day of the year, but they wouldn’t mean squat if things didn’t improve for the working majority.

This is entirely by design. To quote Lenin again: “Democracy for an insignificant minority, democracy for the rich…that is the democracy of capitalist society. If we look more closely into the machinery of capitalist democracy, we see restrictions [that] exclude and squeeze out the poor from politics, from active participation in democracy.” In the U.S., these restrictions most obviously manifest through voter suppression targeting minority groups, but the political system itself is built on a rotten foundation. It is not a government “of the people, by the people, for the people,” as Abraham Lincoln said in the Gettysburg Address, but one of the capitalists, by the capitalists, for the capitalists. The people don’t enter into it—except as sources of wealth extraction.

China, however, turns this relationship on its head. The Communist Party of China, the country’s leading political organ, is a body with membership from the whole of Chinese society, but its base of support was forged in an alliance of workers and peasants. That alliance continues to predominate, ensuring the working majority remains the primary focus when crafting policy and allocating resources.

In countries like the U.S., the affluent form interest groups to protect and expand their profits; Communists’ only interest group is the people. If action is taken in China or other countries governed by communist parties, social benefits and costs are factored in long before anyone considers what the bourgeoisie will think. Because why should we? They aren’t the majority, and if their ideas were put to a vote they’d lose every time. “More money for us,” sad to say, remains quite unpopular.

There are other aspects of what China terms its “whole-process democracy” that could, and should, be addressed in greater detail. Whole-of-society participation in the political process through oversight, consultation, public review, grassroots governance, and many other avenues make China a far more democratic society than the U.S. and its hangers-on will ever give it credit for.

But that’s a topic for another time. For now, I’ll leave you with one last quote:

That’s not Marx or Lenin. That’s Chinese President Xi Jinping, and he’s saying exactly what they would if they were alive today.

One thought on “Ian Goodrum: The ‘Summit for Democracy’ is a master class in hypocrisy”