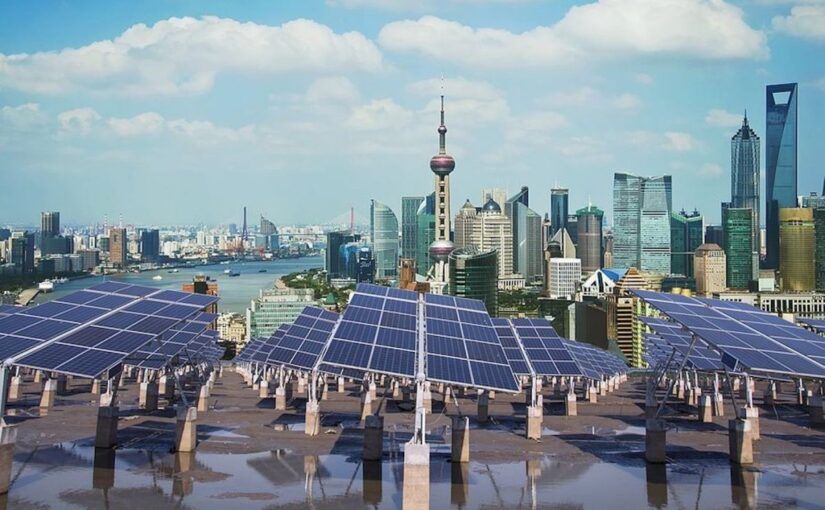 The following article from Asia Times, written by David P Goldman, provides some indication as to China’s commitment to combating climate breakdown and the accompanying massive investment in low- and zero-carbon technology. This is “arguably the most ambitious investment program in economic history, designed to touch every sphere of China’s economic life.” Rather than demonizing China and imposing sanctions on its solar energy industry, Western countries should be closely cooperating with – and learning from – China in humanity’s shared struggle to prevent catastrophe.

China is projected to invest the equivalent of US$75 trillion (487 trillion yuan) in carbon neutrality financing over the next 30 years, representing five times its 2020 national output, according to a December 2021 study by a consortium of government, academic and private-sector experts.

The 200-page report, which encompasses the whole range of carbon-neutral technology from hydrogen-fuel vehicles to nuclear electric power, was issued by the Research Group of the Green Finance Committee of China Society for Finance and Banking under the direction of Ma Jun, president of the Beijing Institute of Finance and Sustainability, an academic unit under the Beijing Municipal Bureau of Financial Work.

The Green Finance Committee of China Society for Finance and Banking was set up by the PBoC and regulators in April 2015.

Ma was previously a member of the People’s Bank of China’s monetary policy committee, chief economist of the Research Bureau of the PBoC and head of China economics and strategy at Germany’s Deutsche Bank. The report’s 40 co-authors include economists at Chinese as well as Western financial institutions.

The $75 trillion projection for green investments includes the entire array of high-tech industries that will gradually replace China’s smokestack industries with their high level of energy consumption and carbon emissions. The proposed scale of investment dwarfs the most ambitious Western estimates, including a $16 trillion estimate by Goldman Sachs in a widely-cited January 2021 report to clients.

The Research Group’s report argues that high-tech investments in carbon-neutral technologies will lift productivity and accelerate economic growth, rather than act as a drag on the economy. It is arguably the most ambitious investment program in economic history, designed to touch every sphere of China’s economic life. And it indicates China’s ambition to dominate an entire range of new technologies.

Some of the biggest changes will occur in transportation, where hydrogen fuel cells will power long-distance road and maritime freight transportation as well as aviation, the Research Group projects. Hydrogen will supply 10% of the energy for China’s aircraft and vehicles.

But the Research Group’s estimate implies that Goldman Sachs’ ambitious forecast may be too conservative. By 2050, hydrogen may provide 15% of the power for Chinese industry, apart from its dominant position in long-distance transport.

Goldman Sachs estimates that demand for hydrogen will increase seven-fold by 2060, driving 20% of the de-carbonization effort, as “a transformational technology for long-term energy storage enabling increasing uptake of renewables in power generation, as well as aiding the de-carbonization of some of the harder-to-abate sectors, with a critical role in several industrial processes (iron & steel, petrochemicals), long-haul transport, and heating of buildings.”

The $75 trillion estimate is daunting, but it should be gauged against China’s extremely high share of investment as a percentage of gross domestic product (GDP). China invests more than 40% of its GDP, and the report projects that a quarter of all investment eventually will be directed towards green technology—that is, a tenth of China’s GDP each year.

The technologies that fall under the “green” rubric, moreover, include a range of high-tech industries including automated industries, medical research and pharmaceuticals.

The report envisions that:

“Zero-carbon electricity will become a reality, and most power generation needs will be met by non-fossil energy, mainly through renewable energy, nuclear power and a small amount fossil-fuel generators equipped with carbon capture and storage technology (CCS).

“Almost all building energy, about half of transportation and industrial energy use will employ zero-carbon electricity so as to achieve extremely low emissions;

“Although it is still difficult for the industrial sector to achieve zero carbon emissions as a whole, hydrogen technology will reduce fossil fuel use and achieve ultra-low carbon emissions;

“The rest of the goal of zero carbon emissions will be achieved through carbon capture and utilization technology and carbon sinks.”

According to the Goldman Sachs report, “For light, short- and medium-haul transport (primarily constituting passenger vehicles and short/medium-haul trucks), we consider electrification as the dominant de-carbonization technology; we estimate that charging infrastructure is a US$1 trillion investment opportunity for full electrification of road transport. For long-haul heavy trucks, we consider clean hydrogen the preferred option, owing to its faster refueling time, lower weight and high energy content.”

Ma and his co-authors contend that the net impact of these changes will be productivity enhancement, as industry moves up the value-added chain. They note that secondary industry comprised 40% of China’s GDP in 2017, compared to an OECD (industrial world) average of just 22.5%, with high concentrations of energy-intensive industries such as cement and steel. Industry consumed about 65% of China’s energy in 2018.

First, the authors observe, China “is a net importer of fossil energy. Therefore, in the process of transition to new energy, our country will greatly reduce fossil energy imports, thereby reducing net energy imports.” China “will be one of the few major countries that will benefit from the low-carbon transition. China’s annual GDP level before 2050 may be 3% higher than the baseline of unchanged policy.”

Finally, the authors argue, the carbon neutrality goal will give impetus to research and development. China, they believe, “has unique advantages in large-scale R&D and promotion of green and low-carbon technologies. On the one hand, China is a major manufacturing country, which can achieve economies of scale effects and supply-chain agglomeration effects. China is already competitive globally in solar power, wind power, electric vehicles and batteries.”

They anticipate “major breakthroughs in industrial intelligence and industrial zero-carbon technology.” Because China has the world’s largest market for green products, “R&D costs are more easily shared,” so Chinese products will have a global advantage in green technology: “With economies of scale, China is likely to become a net exporter of these products.”

Ma and his co-authors cite the January 2021 Goldman Sachs report on China’s de-carbonization, which projects “a US$16 trillion clean tech infrastructure investment opportunity by 2060 and circa 40 million net new jobs.”

The American investment bank believes that “renewable power is the most important technology, potentially aiding the de-carbonization of circa 50% of Chinese CO2 emissions.” It expects “China’s power generation to triple to 2060, driven mostly by solar, wind, nuclear and hydro generation.”

The charging infrastructure for electric vehicles alone presents a $1 trillion investment opportunity, the report adds. The infrastructure buildout will cause “a 15% rise in annual copper demand, with notable increases in aluminum, nickel and lithium, too.” The market for hydrogen, Goldman Sachs adds, will increase seven-fold by 2060.

But the Goldman Sachs report’s estimate of $16 trillion in investment is too low, Ma and his team argue, because it focuses only on a segment of the Chinese economy. Tsinghua University’s Institute for Climate Change and Sustainable Development put the investment total for carbon neutrality in construction, industry and transportation at 174 trillion yuan, or $27 trillion.

The Research Group notes that under the Chinese government’s current policy projection, coal consumption will fall to 15% of industrial power in 2050 from 52% in 2019, and electricity consumption will rise to 60% from the present 26%. But in the carbon-neutral scenario, coal will fall to just 8% in 2050. The proportion of hydrogen fuel, as previously noted, will reach 15%.

To fund investment of this scale, Ma and his team report, China will create a “green financial system.” Green loans already comprise 10% of the outstanding credits of Chinese banks, and this will gradually rise to 25%. At the same time, banks will be constrained to reduce lending to high-emission industries.

In recent years, the financial institutions of developed countries have offered many innovations in green financial products.

The Research Group report envisions a wide range of new products including bonds where return is linked to sustainable-development stock market indices, and institutional investor products based on “a set of universal zero-carbon investment policies,” weighting portfolios according to carbon criteria.

To provide the estimated 487 trillion yuan in low-carbon investment, the authors propose, “the government and regulatory agencies should strengthen ESG (environmental-social-governance) criteria, and promote governance mechanisms for institutional investors that meet the requirements of carbon neutrality.” Regulators should also be on guard against the risk of “green-washing,” that is, misreporting environmental applications in lending, the authors add.

Foreign investors should be encouraged to participate, Ma and his team conclude. “In the face of the trillions of capital required for climate transition, in addition to the domestic capital market, foreign funds will be key to China’s promotion of transition to a green economy and the achievement of the goal of carbon neutrality,” they write.

“Financing costs in currencies such as euros and US dollars are relatively low, and foreign investors are keenly interested in transformational financing products. Attracting foreign investment can effectively increase sources of funding while reducing financing costs…As foreign investors come into the Chinese green financing market, an array of world-leading low-carbon green technologies can also be introduced to promote international cooperation in related fields.”