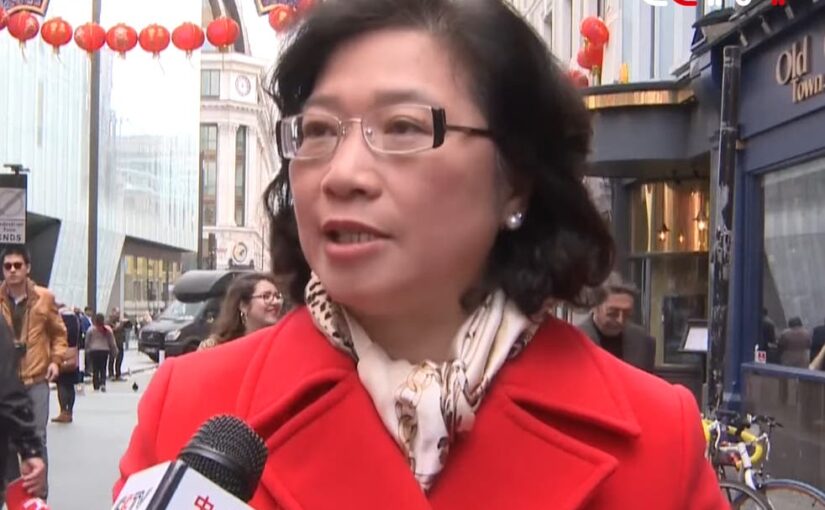 Republished below is an incisive article from Global Times exposing the reactionary, racist and damaging nature of the MI5’s allegations against Christine Ching Kui Lee. Ms Lee, a British citizen, is being targeted for the sole reason that she works to develop cooperative and mutually beneficial relations between Britain and China. A few years ago, during the ‘golden era’ of Britain-China relations, Ms Lee was widely praised for her work; now, however, with Britain closely following the escalating US-led New Cold War, she has suddenly become the quintessence of the ‘China threat’.

MI5 recently issued a warning to MPs, claiming Christine Lee, a woman of Chinese origin, has been working as a spy on behalf of the Communist Party of China with the aim to infiltrate Parliament to interfere in UK politics. Some MPs immediately followed suit to hype the “China threat.” MP Tom Tugendhat, chair of the Foreign Affairs Select Committee, said “the challenge from Beijing is increasing.” Meanwhile, Conservative MP and former party leader, Iain Duncan Smith, called for Ms Lee to be deported and demanded the government make a statement to the House.

MI6 is famous around the world because of the James Bond films. MI5 is a brother department of MI6. Ken McCallum, the current director general of MI5, was given the nickname “007” by his teammates before he took office in April 2020. In his annual threat update for 2021, he warned that the activities of China, Russia and other “hostile states” could have as large an impact on the public as terrorism. This is just the epitome of how deeply he is poisoned by McCarthyism.

MI5 is not satisfied with some general remarks, and has made up a real-life 007 script. But in this fiction, almost all the accusations against Ms Lee come from nowhere. It can only use the lobbyist activities that are widely accepted in the West as “concrete evidence.” Even Home Secretary Priti Patel said stronger laws were needed since Ms Lee’s activity was “under the criminal threshold.” However, the British Parliament has launched smear campaign against Ms Lee. It is a shame for the British rule of law to judge before trial.

Maybe those MPs are also fans of James Bond films. They cannot wait to tell the sensational story after MI5 made a script, in disregard of what the truth is. Perhaps Duncan Smith subconsciously thought Ms Lee is Chinese and so he called for deporting her. However, Ms Lee is a British national and founder of a law firm with offices in London.

It is worth mentioning that Ms Lee was honored as one of No 10’s “Points of Light” by former British prime minister Theresa May for her work to promote interactions between Chinese communities and other communities in the country. By MI5’s standards, an employee of Western government or company working in China could be a suspicious spy if he or she treats a Chinese friend to a meal, and many Westerners in China would thus be defined as “agents” or “proxies.”

In this farce starring MI5 and some MPs, any person with a Chinese-like face is suspicious who may be up to something bad against Britain. They repeatedly targeting the ethnic minorities, which is essentially a racial discrimination stemming from the mentality that “those who are not of our kind have different hearts.” The box office of such a film with a preset standpoint and far-fetched narrative will be a disaster. However, this will inevitably have a negative impact on society when it is widely spread by the British media.

The individuals, companies and organizations that are devoted to promoting China-UK friendship and cooperation will be the first victims. Taking down Ms Lee will intimidate others who are rational on China-UK relations. Anti-China politicians will have more space to maneuver – and they don’t care if such moves will harm Britain’s own interests. In recent years, there has been a significant increase in hate crimes against Asians in the UK, which is also a manifestation of the negative consequences of anti-China sentiment.

Chinese Foreign Ministry spokesperson Wang Wenbin said on Friday that China hopes that relevant British officials will refrain from making groundless remarks, let alone hyping the “China threat theory” for ulterior political purposes. China has no need to interfere in the UK, and China will not do so. The cooperation between China and the UK in many areas in the past few years is a natural result of the two countries’ common interests. It is not by buying off one or two members of parliament. Isn’t it a humiliation to their national status and power to fabricate the logic that China can interfere in UK politics by buying off MPs?

In the past two years, MI5 has come to resemble the CIA. It serves more of Washington’s strategic needs while doesn’t even care taking Britain into the trenches. Britain has always said it has an “independent diplomacy.” Now is the time to test that.