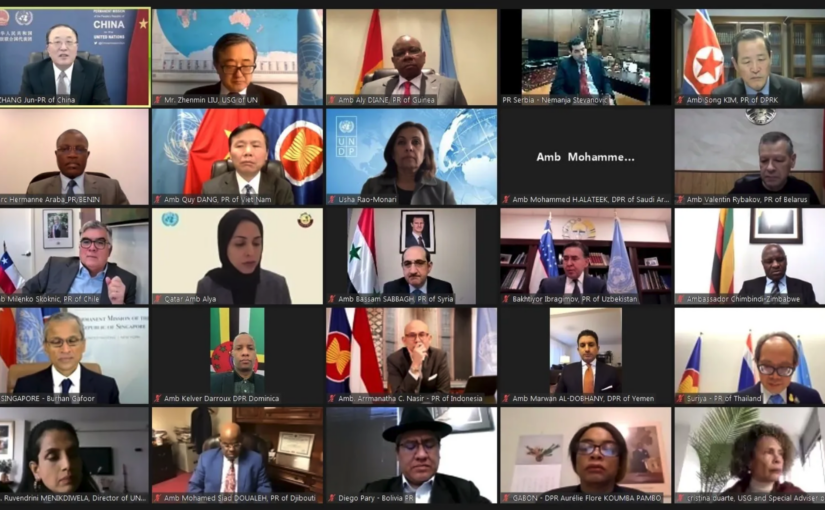 We are very pleased to republish this article by US anti-imperialist journalist Benjamin Norton discussing how China is taking the lead in fashioning an international united front of developing countries against imperialism and in favour of independence, peace and development on both the political and economic fronts. Benjamin notes that the Group of Friends in Defense of the Charter of the United Nations has a stronger core of anti-imperialist and progressive governments promoting its explicitly political agenda whereas the Group of Friends of the Global Development Initiative, launched earlier this month, embraces a considerably broader range of developing countries.

In republishing this article, we also take this opportunity to warmly welcome Benjamin’s new Multipolarista media platform. We wish it every success and look forward to cooperating.

China is leading an international effort to develop alliances to counter US hegemony.

In March 2021, 17 nations — many led by anti-imperialist and progressive governments, including Cuba, Venezuela, Nicaragua, and Bolivia among others — formed a diplomatic alliance called the Group of Friends in Defense of the Charter of the United Nations, which seeks to defend sovereignty and multilateralism against the unilateral domination of the United States and Western Europe.

This January 20, China’s mission to the UN launched a new, economic version of this diplomatic alliance, called the Group of Friends of the Global Development Initiative.

Chinese President Xi Jinping announced the creation of the GDI at the United Nations General Assembly in September 2021. He said the campaign aims at promoting “people-centered,” environmentally friendly development, with the primary goals of reducing poverty, helping formerly colonized countries in the Global South, and eventually achieving carbon neutrality.

To this end, Beijing has sought to merge the GDI with the UN’s 2030 Agenda for Sustainable Development.

The new Group of Friends of the Global Development Initiative launched this January 20 consists of countries who have joined China in its GDI.

In the founding meeting, Beijing’s ambassador cautioned against “unilateralism” and the “resurgent Cold-War mentality and the clamoring for ‘decoupling’” — a clear reference to the aggressive campaigns waged by Washington and Brussels.

The Chinese ambassador explained that the GDI “is a platform for mutually beneficial and win-win cooperation.”

While the United States and European Union have tried to recruit countries in a global Cold War Two alliance against China and Russia, Beijing made it clear that the GDI “is open and inclusive, and will not create any kind of small circles.”

Representatives of the following nations participated in this founding meeting of the Group of Friends of the Global Development Initiative, alongside China:

Unlike the Group of Friends in Defense of the Charter of the United Nations, the Group of Friends of the Global Development Initiative is not clearly anti-imperialist. It includes, for example, the reactionary Gulf monarchies of Saudi Arabia, Qatar, and the UAE, which collaborate with Western imperialism. And some other members are certainly not progressive friends of national-liberation struggles.

But this new economic alliance shows the foundations for the structure of the new multipolar world being built, which is no longer dominated by US unipolar hegemony.

In this increasingly multipolar world, we can expect to see more contradictory moves by countries like the Gulf monarchies, which are trying to balance the rise of China against the United States to their mutual benefit.

This process is full of contradictions, but it part of a general weakening of US imperialism, and creates more political, economic, and diplomatic space for progressive and revolutionary forces in countries like Cuba, Venezuela, Nicaragua, Bolivia, and beyond to not only survive but to thrive and advance.

At the founding meeting, China’s permanent representative to the United Nations, Zhang Jun, explained Beijing’s thinking behind the new Group of Friends:

As we speak, the world today is faced with many grave challenges. We are witnessing profound changes and a pandemic both unseen in a century. The wealth gap, recovery gap, development gap and immunity gap keep widening. Global development is under severe impact. The pandemic has left many countries, especially developing countries, high and dry. People of all countries are eager to get back onto the right track of sustainable development.

Against this backdrop, the GDI proposed by President Xi aims at addressing the pressing challenges facing all countries, especially developing ones. And it is committed to practicing true multilateralism, putting people front and center, fully implementing the 2030 Agenda, and realizing the aspiration of all people for a better life.

Recent years have witnessed setbacks in global development, and widening wealth gap and increasing inequality among and within countries. The pandemic has further eroded the global poverty reduction gains in the past decade, one hundred and forty million people falling back into poverty, the number of people living in hunger reaching eight hundred million. We are also facing food security, energy security, climate change and other prominent issues. The implementation of the 2030 Agenda is confronted with serious challenges. Against such backdrop, the GDI adheres to the people-centered philosophy, prioritizes development, and promotes the international community to place development at the core of the global macro policy framework. I’m sure it will provide stronger and more targeted support to developing countries, making sure no one is left behind.

It is important to note that the Initiative, with development as its priority and commitment to people-centered development, aims to protect and promote human rights through development, especially the right to subsistence and development of all people, including women, children and other vulnerable groups.

The creation of the Group of Friends of the Global Development Initiative is just one of a series of very interesting diplomatic moves happening behind the scenes. These developments don’t get coverage in mainstream corporate media because they’re not very sexy, but they are important.

The launch got zero coverage in the mainstream English-language corporate media. Chinese state-backed media outlets did cover the event though.

The Group of Friends in Defense of the Charter of the United Nations, the diplomatic complement to the Group of Friends of the Global Development Initiative, was formed in March 2021 by the following 16 UN member states and Palestine (a UN observer state):

Both the diplomatic and the economic alliance are still very young, but expect to hear more about these Groups of Friends in the future. These are the seeds that have been planted for a new multipolar international order.