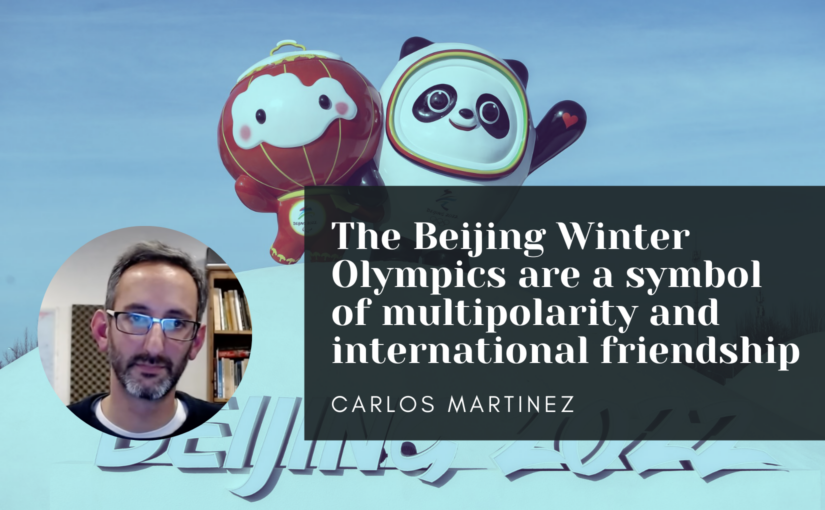 In this article, originally published in the Global Times, Carlos Martinez addresses the pathetic attempts by a handful of imperialist countries to organise a ‘diplomatic boycott’ of the Beijing Winter Olympics, noting that the vast majority of the world’s countries have no interest in participating in the US-led New Cold War. Meanwhile the Games will showcase a modern, socialist China that is a leading force in the construction of a multipolar world.

With over 30 heads of state and government gathered in Beijing to attend the opening ceremony of the 2022 Winter Olympics, in spite of the pandemic which is still raging in most of the world, the Games will prove to be a symbol of a deepening multipolarity and global solidarity.

A tiny handful of imperialist countries, led by the United States, tried and failed to coordinate a so-called ‘diplomatic boycott’, based on absurd and debunked fabrications about the treatment of Xinjiang’s Uyghur population.

When Joe Biden announced a year ago that “diplomacy is back,” most people around the world hoped he had a more positive program in mind. Tellingly, the only countries that have supported this highly undiplomatic boycott are the same countries that have been waging genocidal wars on the Muslim world for the last two decades. Britain for example was an enthusiastic participant in the wars on Afghanistan, Iraq and Libya. One wonders why it didn’t boycott its own London 2012 Olympics, as a statement of condemnation of its state terrorism in the Middle East.

Not one country in Africa, Latin America, the Middle East, Southeast Asia, Central Asia or the Caribbean has joined the boycott or even spoken in favour of it. Not a single Muslim-majority country has supported it.

On the other hand, one group of countries that unanimously supports it is AUKUS – a security pact formed in September 2021 consisting of Australia, the UK and the US. Everybody understands that the purpose of AUKUS is to extend neocolonial hegemony into the Pacific. The so-called diplomatic boycott is merely a propaganda arm of that same project; it is a weapon of the New Cold War.

Meanwhile, President Xi Jinping will be joined at the opening ceremony in Beijing by IOC President Thomas Bach, UN Secretary-General Antonio Guterres, WHO Director-General Tedros Adhanom Ghebreyesus, Russian President Vladimir Putin, Pakistani Prime Minister Imran Khan, Argentine President Alberto Fernandez, and many more. Far from being the diplomatic flop the US and its friends were hoping for, the Winter Olympics are a milestone on the road to a multipolar future, proof that the peoples of the world greatly value their friendship and mutually beneficial cooperation with China.

It’s not difficult to understand why. China is the biggest trading partner of the majority of the world’s countries. It tenaciously pursues peace and non-interference, and promotes dialogue and conflict resolution. China stands up against war, hegemonism, unilateral sanctions and destabilisation, and it actively supports sovereign development in the Global South. As such, the peoples of the world recognise it as a valued and all-weather partner in the pursuit of a peaceful and prosperous shared future for humanity.

Another outstanding feature of the Beijing Winter Olympics is that they will be the greenest Olympics in history, and the first in which all sporting venues are powered exclusively with renewable energy. Five of the seven venues are legacy venues that were built for the 2008 Olympics. The vehicles transporting participants, staff, officials and spectators run on either electricity or hydrogen. Furthermore, Beijing has expanded its afforestation program such that the city’s tree coverage is now 44 percent – double that of London or New York City.

These green Games serve as a reminder that China has become a global leader in the struggle against climate breakdown. Xi Jinping’s framework of an ecological civilisation, along with China’s unprecedentedly ambitious goals to reach peak carbon emissions before 2030 and carbon neutrality before 2060, show China to be a highly responsible and reliable partner in humanity’s shared effort to preserve and protect the environment.

The Beijing Winter Olympics will also showcase China’s world-leading Covid suppression strategy, via the closed loop system which will ensure the participants are completely safe and not at risk from becoming infected. There are very few countries in the world that could guarantee such a level of safety at a major public event of this kind; this demonstrates the extraordinary success of China’s dynamic Zero Covid strategy.

Over a year has passed now since the last death from Covid in mainland China. The few small outbreaks have been quickly contained, economic growth has recovered, and people’s lives continue to improve – a stark contrast with countries such as the US and Britain, which between them have suffered over a million deaths from the pandemic.

When the People’s Republic of China was founded in 1949, China was among the world’s poorest countries. It would have been almost unimaginable that, seven decades later, Beijing would become the world’s first Dual Olympic City, showcasing a modern, socialist China that has eliminated extreme poverty and turned itself into a technology powerhouse and a leading protagonist in the construction of a democratic world order.

The success of the Beijing Winter Olympics 2022 is a testament to the hard work, creativity and collective spirit of the Chinese people, and the outstanding leadership of the Communist Party of China.