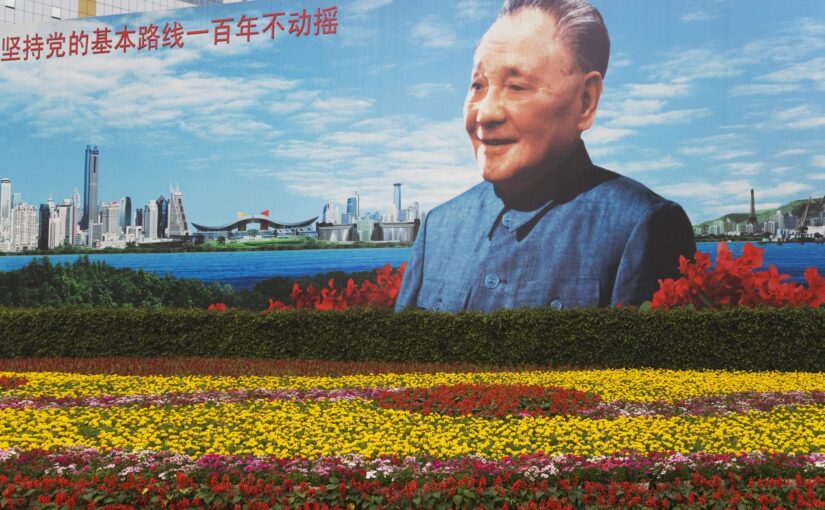 We are pleased to republish this informative article by Bradley Blankenship, originally carried by RT, refuting the recent call by billionaire currency speculator George Soros for ‘regime change’, that is counter-revolution, in China. Blankenship’s article is particularly valuable in that it demolishes the attempt to juxtapose Xi Jinping’s leadership and programme to that of Deng Xiaoping, the architect of China’s hugely successful reforms. In Blankenship’s words, “to state the obvious, Deng Xiaoping was a committed communist. There’s no doubt about it.”

Billionaire George Soros, the founder of the Open Society Foundations, gave a speech this week to the conservative Hoover Institution in which he compared China under President Xi Jinping to Nazi Germany and called for regime change in Beijing.

Soros said in his speech, “Xi Jinping has done his best to dismantle Deng Xiaoping’s achievements. He brought private companies under Deng under the control of the [CPC] and undermined the dynamism that used to characterize them.” He also said that Xi, unlike other Chinese leaders like Deng Xiaoping, is “a true believer in communism,” and added: “It is to be hoped that Xi Jinping may be replaced by someone less repressive at home and more peaceful abroad.”

Apart from the facts that this is a pretty bold attempt to interfere in China’s internal affairs and that it ignores the reality that Beijing’s government has a trust rating of 91% from its citizens, Soros’ assessment of what’s going on in the country is extraordinarily ignorant and, for the most part, just not true.

For starters, Xi is not undoing anything that Deng did with regards to China’s opening up and reform policies. In fact, Xi has only doubled down on such policies and every single one of Xi’s remarks on the subject emphasizes leaning into globalization and removing barriers to international trade. (See: Xi’s latest WEF speech).

For example, just this year the largest free-trade zone in the world, the Regional Comprehensive Economic Partnership (RECP), a Chinese-led initiative in the Asia-Pacific region, was established. This zone encompasses some 30% of both the world’s population and GDP. Does that really sound like a society that is closing itself off?

The numbers also paint a clear picture. China’s General Administration of Customs (GAC) announced on January 14 that the country’s trade volume exceeded six trillion dollars for the first time in 2021. On top of this, foreign investment into the Chinese mainland expanded 14.9% year-on-year to a record high of 1.15 trillion yuan in 2021. In dollar terms, this increase was a 20.2% year-on-year increase to a total of 173.48 billion dollars.

Second, China’s dynamism is only increasing in the Xi era. By one crucial metric, the UN’s intellectual property agency has posted China as having the highest number of patents filed in the world since 2020.

Chinese telecom giants like Huawei and ZTE are lightyears ahead of their Western counterparts, and so much so that some US client states have to manufacture ‘national security threats’ to bar Chinese companies from public tenders. China’s State-owned China National Nuclear Corp (CNNC) just inked a deal with Argentina on Tuesday to build a reactor using China’s Hualong One technology, which is only the second time ever China has exported its nuclear technology and the first time it’s won a highly competitive contract.

In addition, China is already an unsung industry leader in e-commerce. Boasting the largest e-commerce sector in the world, larger than the US and EU combined, Chinese consumer spending is projected by Morgan Stanley to double to about $12.7 trillion by 2030. This would essentially put China’s consumer spending at current US consumer spending.

As the ongoing Covid-19 pandemic pushes more and more shopping online in the West, major companies like Meta, Walmart, and Amazon are simply lifting features from Chinese e-commerce that existed pre-pandemic to boost an increasingly online market. To quote a popular saying, “If you want to know what Amazon will do in two or three years, just look at what China’s doing now.”

Finally, to state the obvious, Deng Xiaoping was a committed communist. There’s no doubt about it. China’s reform and opening-up policies were not a backstep toward capitalism, rather they were instituted to address the stagnation that gripped the world at that time. The CPC made a strategic decision to open up to the Western world to develop its productive forces, namely new technologies and new skills to infuse into the labor force.

“In China, we intend to acquire advanced technology, science and management skills to serve our socialist production. And these things as such have no class character,” Deng was quoted as saying in 1984.

I believe that this final point is the root of many Westerners’ misperception of China, including what we see here from Soros. They believed at the time of China’s reform and opening-up that inflows of capital would essentially create a miniaturized version of capitalism with China, leading to the ending of Communist Party rule and ushering in a Western-style government.

However, no one in the CPC, including Deng, believed this would happen, or wanted it. To quote Deng again, when asked about this exact same scenario in 1980 by an Italian journalist:

“No matter to what degree China opens up to the outside world and admits foreign capital, its relative magnitude will be small and it can’t affect our system of socialist public ownership of the means of production.”

He continued, “Absorbing foreign capital and technology and even allowing foreigners to construct plants in China can only play a complementary role to our effort to develop the productive forces in a socialist society. Of course, this will bring some decadent capitalist influences into China. We are aware of this possibility; it’s nothing to be afraid of.”

Indeed, Deng’s prescriptions did come into play – and Xi, in my opinion, simply followed the same line. For example, when we read this quote about “some decadent capitalist influences” in China and how the CPC was not afraid of it, probably because they knew how to address it, this seems to be the entire basis for Xi’s sweeping anti-corruption campaign that also uprooted a CIA informant network.

I think the assumption that China’s reform and opening-up would naturally lead to regime change was stupid from the start and people like Soros are just salty that their spies got caught. They’re mad that China is no longer a sidecar to Western countries and is becoming a dominant geopolitical player in its own right.