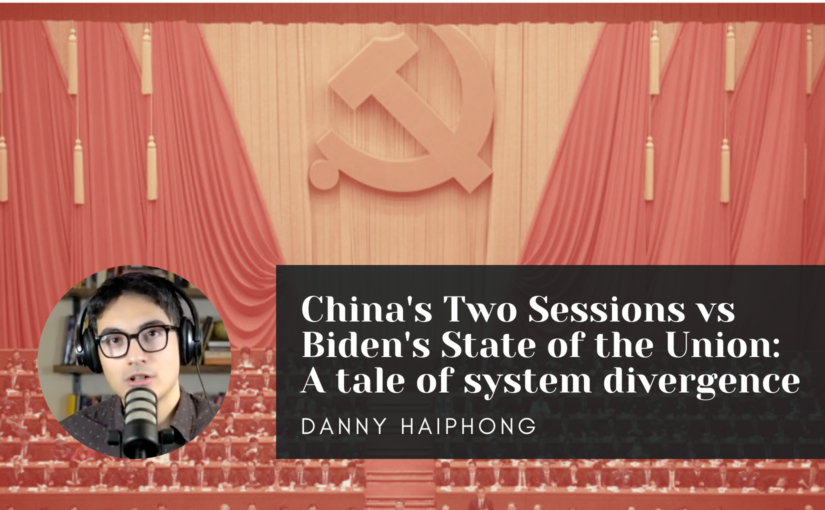 In his latest article on The Chronicles of Haiphong, Danny Haiphong compares two recently-held major political events: China’s ‘Two Sessions’ and the US State of the Union address. Danny observes that, while Biden’s address was a predictable sequence of false promises and assertions of American hegemony, China’s Two Sessions were an exercise in democracy, summing up thousands of intensive discussions and debates over the past year and, on that basis, setting out concrete tasks for the coming year – with a clear focus on improving living standards and stepping up efforts to tackle climate change and biodiversity. Danny notes that this system divergence, with China continuing to rise and the US continuing to decline, is a major part of the US ruling class’s motivation in fomenting the current New Cold War, which offers nothing for ordinary people in the West and which must be firmly opposed.

The two largest economies in the world have been busy on the political front. U.S. President Joe Biden opened the month of March with his first State of the Union (SOTU) Address. China’s National People’s Congress (NPC) and the Chinese People’s Political Consultative Conference (CPPCC) convened at the Great Hall of the People in Beijing on March 4th for the annual two sessions conference. Rarely are these events discussed together. What binds them is a tale of system divergence.

Joe Biden’s SOTU presented a snapshot into an empire in decline. The first fifteen-plus minutes of the speech were spent beating the drums of war with Russia over its intervention in Ukraine. Biden announced new restrictions on airline flights to and from Russia that pile onto an already intense package of sanctions designed to starve Russia into submission. Ukraine was portrayed in a predictably heroic light, with Biden passionately asserting that the U.S. stands with the people of Ukraine for “freedom over tyranny.” Biden promised that the U.S. would punish Russian President Vladimir Putin for his so-called rejection of diplomacy, but stopped short of calling for direct U.S. military involvement.

Beyond pouring gasoline on the Russia-Ukraine crisis, Biden used the State of the Union to pour American exceptionalism on the U.S. public. “We are going to be okay” assured Biden, detailing accomplishment after accomplishment with the typical American hubris. Job numbers are growing. The pandemic situation has improved. And Biden made sure to spend ample time promising the public more jobs and a revival of manufacturing to win the battle of “democracy” versus China’s “autocracy.”

The problem with this rosy picture is that it’s a lie. Joe Biden raved about his administration’s handling of COVID-19 yet more people have died of the virus under his administration than his predecessor, Donald Trump. Job numbers in the United States remain at least 2 million below pre-pandemic levels. Biden’s continued reliance upon monopoly capital to bring manufacturing back to the United States is an old page out of the neoliberal playbook. Furthermore, there is no guarantee that the United States will invest in green infrastructure. Given the enormous influence of the fossil fuel industry over Congress, it’s just as likely that the United States will continue to play a negative role in the fight against climate change.

Much of this was acknowledged in CNN’s own fact-check of Biden’s State of Union Address. Of course, the U.S. corporate media didn’t indulge viewers with the reality that only war and austerity is guaranteed under the U.S.’s declining empire. Joe Biden has already signed off on the largest military budget in history and has refused to enact a single universal policy popular among a broad base of voters such as universal student debt cancellation. And life is only going to become harder for working class people as sanctions against Russia’s energy industry raise the cost of oil and gas, piling onto an already suffocating rate of inflation.

Austerity at home and endless war abroad are hallmarks of an empire in decline. Joe Biden came into the State of the Union Address sporting a low public approval rating of about 40-45 percent. Popular opinion of Biden’s handling of the Russia-Ukraine crisis also started on a similar low point. The performativity of the State of the Union and Biden’s willingness to take an aggressive posture against Russia has temporarily improved his stock among the U.S. voting base. However, none of this changes the downward trajectory of the U.S.s political system.

China’s two sessions, on the other hand, are indicative of a political system that is only strengthening in legitimacy. The two sessions are an annual event where China’s two national governance structures, the National People’s Congress (NPC) and the Chinese People’s Political Consultative Conference (CPPCC), gather to set concrete policy goals for the coming year. Unlike the State of the Union Address, President Xi Jinping does not merely present remarks on the status of the nation. The two sessions are a proactive process. Thousands of deputies and CPPCC members directly participate in the formulation of policies that affect the lives of Chinese people at all levels of society.

China’s two sessions offer a dose of hope for the future amid an unprecedented moment of global crisis. The two sessions take issues that have been debated within society and among the lower levels of the governance system and turns them into concrete policy. China’s Premier Li Keqiang released the annual work report which detailed China’s expected growth target of 5.5 percent and the many tasks and factors that influence policy formulation and implementation for the coming year. Climate change, foreign interference, rural revitalization, and the welfare of mothers under the three-child policy were just a few of the pressing matters addressed at the two sessions.

China’s governance system mixes direct participation with consultation to produce rapid and effective results. The advance of national priorities is a widely held expectation. Theatrics and performativity without action have no place in modern Chinese society. While Western-style “democracies” suffer from political stagnation and declining public trust, China’s governance system has only grown in prestige domestically and globally. That’s because China not only talks the talk, but also walks the walk.

China was one of the poorest countries in the world just a few decades ago. It is now the second largest economy in GDP terms and has surpassed the U.S. and West in the realms of infrastructure development and high-technology. China also leads the world in renewable energy investment and has set ambitious climate targets for a nation of its size. In 2020 alone, China eliminated extreme poverty and effectively contained the COVID-19 pandemic. An increasingly stable and effective governance system at home has further placed China in a favorable position to lead the effort to construct a multipolar world abroad.

It should come as no surprise that more than 95 percent of the Chinese population is satisfied with the performance of their government. It should be even less surprising that Joe Biden’s administration possesses a faltering favorability or that majorities in the United States distrust government institutions. The United States and China are moving in opposite directions. This tale of system divergence has led the U.S. ruling class to conclude that its only means of competing with China is to wage a dangerous New Cold War. Ironically, the New Cold War also holds the seeds of destruction for the U.S.’s system of ceaseless austerity and war.

U.S. aggression toward China and Russia is strengthening the strategic partnership between the two rising powers in the East. U.S. and E.U. sanctions against Russia threaten to unravel of the global economic order. The more that the U.S. attempts to isolate China, the faster that China moves forward with the Belt and Road Initiative and its strategy of global integration. While China’s global orientation is not contingent upon the U.S., New Cold War hostilities only hasten the empire’s own self-imposed isolation.

The U.S.’s destructive trajectory thus possesses a silver lining. But this silver lining is also laced with more suffering for the workers and oppressed majority of humanity. The construction of a solidly anti-imperialist mass movement in the United States is therefore a critical component in the development of a multipolar world. As China and the U.S.’s systems diverge, more opportunities will emerge for revolutionary forces to seize the time. But those forces must exist first, and it is our responsibility to build them.

One thought on “China’s Two Sessions vs Biden’s State of the Union: A tale of system divergence”