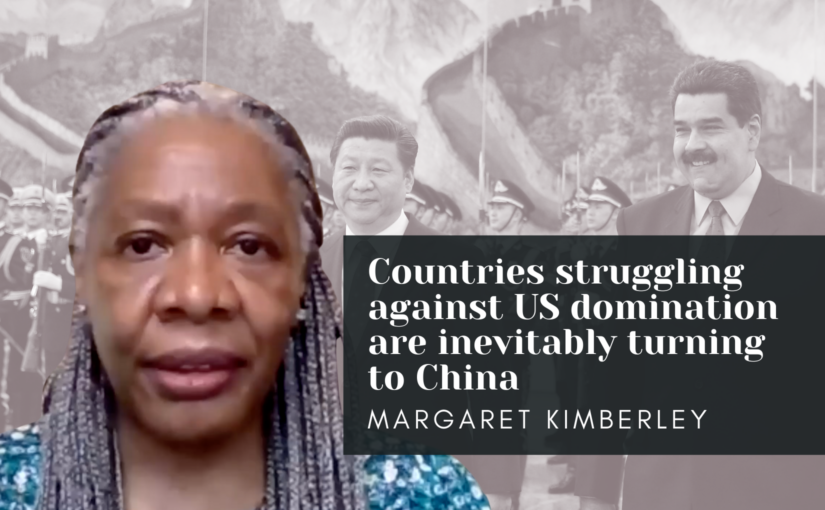 Below is the video and text of a speech by Margaret Kimberley, Executive Editor of Black Agenda Report, at our recent event 21st Century Socialism: China and Latin America on the Frontline. Margaret draws on her recent participation in delegations to Nicaragua to highlight the growing links of cooperation and solidarity between China and progressive Latin America, and she contextualizes this within an emerging multipolar system of international relations which stands in stark contrast to US unipolarity and hegemony.

Greetings everyone. Of course I want to start by thanking Friends of Socialist China for inviting me to participate in this meeting today. When I received the invitation in early February I didn’t know, I don’t think anyone knew, that the world would change irrevocably just a few weeks later. But here we are and I’ll discuss a little bit how the conflict in Ukraine is connected to the subject of today’s discussion.

Only people in the United States were unaware that the unipolar world was ending but the rest of the world was very much aware. China’s economic ascendancy is a direct challenge to US power and is being felt and embraced in Latin America.

I saw this for myself on my first trip to Nicaragua in November 2021. I was invited to be an electoral companion, an acompanante, during that nation’s election and I attended as a member of a Black Alliance for Peace delegation.

Just one week before the United States continued its war against the Nicaraguan government when the RENACER Act was passed with bipartisan congressional support. In a deliberately cruel irony the word renacer means rebirth in Spanish. But this legislation was a continuation of the sanctions regime which is so harmful to the Nicaraguan people. Sanctions are war by other means and are defined as a war crime in that they impose collective punishment on civilian populations. Yet they are used against 40 different countries including Nicaragua, Venezuela and Cuba.

Immediately after the election the Nicaraguan government established relations with the People’s Republic of China and in so doing proved that US aggression can be opposed with strategic alliances. I was fortunate to return to Nicaragua in January 2022 again as part of a Black Alliance for Peace delegation. Despite being told endlessly by the Biden administration and their stenographers in corporate media that Nicaragua is “isolated” I saw that it is anything but. Of course the meaning of that word is twisted and in this context means nothing more than “countries the US and its friends don’t like.” I saw otherwise. The presidents of Venezuela and Cuba were in attendance, as were diplomatic representatives from Russia, China, Angola, India, Sudan, Vietnam, Japan, Syria, Libya and Palestine among others. Billions of people from every continent were represented there and prove that U.S./NATO/EU opinions carry little weight elsewhere.

I can remember when the US itself made contact with China 50 years ago. Richard Nixon, the McCarthy era cold warrior and red baiter traveled to China and met with Mao Zedong, partly in an effort to establish a wedge against the Soviet Union. But much has changed since then. China was acceptable to the US as long as it was just a source of cheap manufacturing. In deindustrializing itself and helping in this capacity it promoted its own undoing as a manufacturing power and as the saying goes shot itself in the foot. Now China is demonized and slandered at every opportunity by the same country which sought to use it for its own purposes. I can also remember when Deng Xiaoping visited the US in 1979 and was warmly greeted everywhere he went, including at a Texas rodeo where he rode around in a wagon wearing a cowboy hat. It was very funny. But since that time China turned itself into an enemy when it succeeded beyond what the US thought it would accomplish.

As I said the rest of the world can also see what is happening and in many cases as in that of Nicaragua, needs China to protect against the actions of the United States.  President Biden says is not in the US backyard, it is in the front yard, an absurd statement which reinforces the discredited Monroe doctrine but which he seemed to think was positive.

I suppose though that the administration is not completely stupid and they showed it by sending vice president Kamala Harris to Honduras for president Xiomara Castro’s inauguration. Castro had signaled a willingness to follow Nicaragua and establish relations with Beijing but she backtracked. It is unfortunate that she did so, but the fact that Washington didn’t repeat its actions targeting Nicaragua demonstrate the importance of relations with China for countries in the region.

I think it is fair to say that events far away from this hemisphere taking place in Ukraine signal that change is irrevocable. Regardless of opinions on Russia’s actions in Ukraine it is clear that Washington has been damaged by its own acts and China has been elevated. In its effort to impose its will on Russia, a 30-year long process since the fall of the Soviet Union, the US and NATO continued encroaching, including by leading a 2014 coup against the elected Ukrainian government.

In the process of reacting to Russia’s actions of February 24, 2022, Washington imposed sanctions, very harsh ones against Russia, but those have ended up harming the whole world. It can even be said that the US has sanctioned itself. The sanctions hurt China’s relations with Russia but have also been a benefit. Saudi Arabia has indicated its willingness to sell oil to China and be paid in yuan instead of the US dollar. The example of rampant sanctions, now against Russia, make a move to Chinese currency very prudent. And so it is with Latin America. Russia’s military action has shown that the US can be if not stopped altogether, impeded in its drive to maintain dominance over the world.

Of course it has to be pointed out that China had never capitulated to the US regime change effort in Venezuela. China kept buying Venezuela’s oil and in so doing showed the way for the rest of the region, and made clear that one of the ways to halt US influence in the region is to maintain relations with China.

We see in Venezuela how the US effort to harm countries boomerangs upon itself. The sanctions against Russia forced the US to go to the Venezuelan government, which it also says is illegitimate and in fact not the true government, and ask for oil. The JCPOA negotiations have also been impacted as Iran, also treated as a pariah whose oil production was to be destroyed, but which is now seen as a potential source of oil.

Until recently the US continued its bizarre and ultimately futile efforts to “contain” China. The latest is the proposed America Competes Act, which actually refers to China as a “malign influence.” It would give millions of dollars in what can only be called corporate welfare to US chip makers.

Among other things it allocates $300 million a year to create a “Countering Chinese Influence Fund.” Another measure in the bill would train journalists “on investigative techniques necessary” to report on the Belt and Road Initiative. Remember this when we’re told about indoctrination elsewhere in the world.

While the House and Senate debated different versions of this legislation, Russia changed everything. Now the US thinks it can threaten China and force it to turn away from a strategic partner, described by Xi Jinping as being “better than an ally.”

In discussing China’s role in Latin America I think it is important to reinforce the need for anti-imperialist thought to be uppermost in our minds when we consider these issues. There is a liberal tendency, even among some who claim to be on the left, to feel a need to critique Latin American nations who are struggling to maintain their sovereignty in the face of US attacks, and who turn to China in response. This is the last thing they need from people who call themselves friends. It is patronizing to assume that leaders of these countries need instruction from any of us. Our job is to oppose US imperialism in all of its manifestations, to point out the wrongs of US policy and to expose the politicians and scribe so-called journalists who implement these attacks and to support the peoples of Latin America as they seek to build sovereign nations.

Latin American nations have their own political processes and their own struggles to work through. If we succumb to US propaganda and repeat outright lies about concentration camps in Xinjiang for example, we only help the imperialist process. It is most important that we spend our time explaining to the public, particularly the US public, the truth about their government’s activities in the region and around the world. That is our task.

We are living in a very interesting but also very perilous moment. But one thing is certain. Countries struggling against US influence will inevitably turn to China. This trend benefits them and will not stop. And that is all for the good of the entire world. Thank you very much.