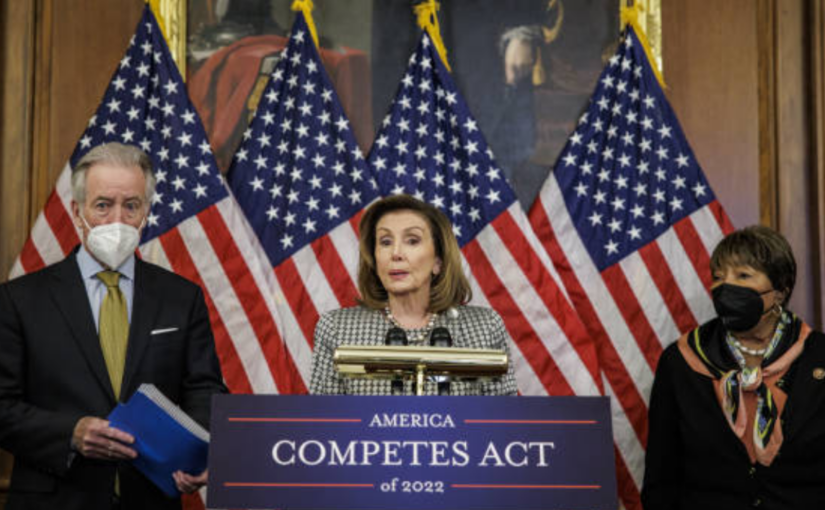 In this article, originally carried by CGTN, Keith Lamb argues that the America COMPETES Act of 2022, in which China is mentioned a staggering 666 times, and which now only awaits presidential approval following its passage in the House and Senate, amounts to a formal declaration of the New Cold War, not only against China but against the entire Global South.

The America Creating Opportunities to Meaningfully Promote Excellence in Technology, Education and Science (COMPETES) Act of 2022 has passed in the House and the Senate. It now only needs presidential approval to become law. If it is passed, it will mark the official start of a new Cold War against China and the Global South.

Importantly, the “America COMPETES Act of 2022” is actually the “United States Innovation and Competition Act of 2021.” This is because, on March 28, the Senate voted to use the more belligerent text of the 2021 Act for the 2022 Act.

The United States Innovation and Competition Act of 2021, originally known under the imperial sounding “Endless Frontier Act,” was drawn up by those conditioned by the ideology of neoliberal imperialism, namely Senator Todd Young and Chuck Schumer. Schumer was a supporter of the illegal occupation of Iraq, and Young, an ex-naval officer with an MBA from the University of Chicago, one of the centers of neoliberal ideology, worked at the anti-China think tank “The Heritage Foundation.”

Of course, while it’s important to understand the background of those responsible for drawing up the America COMPETES Act of 2022, it is even more critical to analyze what it entails. Mainstream media has primarily focused on the billions in government funding that will be spent funding U.S. tech to compete with China. This has produced all manner of debates regarding whether it is the best way to compete.

For example, the Center for Strategic and International Studies believes U.S. state spending will be unable to compete with China’s spending. It suggests that using the U.S. “traditional advantage” of connecting government grants with academic research and venture capital, within the context of market competition, is better than “China’s statist military-civil fusion national strategy.” However, this advice is redundant because its statist versus market dichotomy misconstrues the nature of both economies when it comes to technological development.

In terms of technological development, the U.S. has always had considerable state input into its market forces. Likewise, China has a vibrant market and growing academic prowess. The difference is that, due to ideology, the U.S. must emphasize the free market, even if monopolies predominate. As a case in point, Noam Chomsky, the left-wing academic, frequently cites how the computer industry was developed through state funding and then sold back to consumers. Furthermore, warfare, which is primarily carried out by state actors, highlights the interconnection of state forces in tech development.

Needless to say, the U.S. could not hope to seek hegemony over the 96 percent of the world’s population, outside its borders, without advanced weaponry, dependent on semiconductors. Thus, the U.S.’ undemocratic obsession with keeping the heights of technological advancement in the hands of the few explains why China’s rise is unacceptable.

The concern over China’s technological and military capacity is evident in the 2022 Act. However, it goes much further than just technological competition. It details how the U.S. plans to counter China’s rise and its cooperation with the rest of the Global South.

If passed into law, it will further step up the propaganda campaign against the Hong Kong Special Administrative Region, the Xinjiang Uygur Autonomous Region and the Tibet Autonomous Region. This interference with China’s sovereignty can only raise already strained tensions.

Then, when it comes to cross-strait unification, the U.S. will seek to raise the Taiwan region’s presence and place U.S. “fellows” in Taiwan’s governing authority positions and civic institutions. For the act to assume Taiwan authorities would “take this order” raises the question of the nature of “capture” regarding those currently de facto governing the Taiwan region. Without a doubt, the insertion of “fellows” would negate any claim that Taiwan’s “democracy” acts for the people and would lead to the inflaming of East Asia.

Outside China, the U.S. seeks to counter the Belt and Road Initiative. However, its plans are about containing global cooperation rather than offering anything of substance in its place. For example, there is no grand developmental plan. How could there be? First, the U.S.’s infrastructure is in disarray. Second, the advancement of the “96 percent” would lead to them eventually having the military and technological capability to resist the U.S., which dominates through possessing superior technological capacities in the theater of war.

Consequently, this is not just a declaration of war against China; it is a declaration of war against all the “upstarts” in the Global South. Take Africa as an example. The act calls for an investigation into how China can exert so much “undue influence” on African governments, and it describes China’s lending measures as “predatory.” This demeans African people’s ability to reason and ignores the history of the chaos the neoliberal Washington Consensus wrought on the continent. In fact, Africans partner with China because they see unprecedented tangible developmental benefits.

The greater problem is that the America COMPETES Act of 2022 extends to countering China in every region of the world. No one is safe, including U.S. allies, such as Saudi Arabia, which is called into question over its nuclear energy cooperation with China. Terrifyingly, this could easily lead to a hot war, as technologically, the U.S. cannot compete with China when it comes to infrastructural development. However, the U.S. does have the technological capacity to fuel hot wars and destroy development. As such, should this act become law, the entirety of the Global South must raise its vigilance regarding the U.S. using its “traditional technological advantage,” which it seeks to maintain.

One thought on “America COMPETES Act of 2022: A manifesto for a New Cold War”