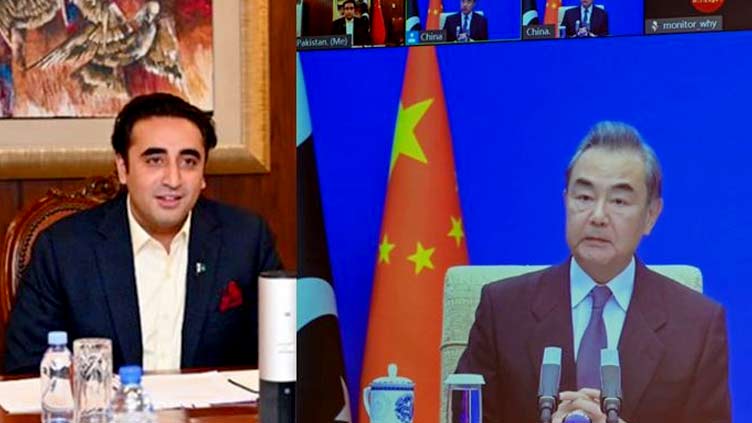 Wang Yi stressed that the friendship between China and Pakistan will be passed on from generation to generation and will not be shaken or changed by a single incident.

Bhutto Zardari’s mother, Benazir Bhutto, and especially his grandfather, Zulfikar Ali Bhutto, both former Prime Ministers, were pioneers of the special friendship between China and Pakistan. Zulfikar Ali Bhutto was the last foreign leader to meet with Chairman Mao Zedong on May 27th 1976. The last publicly known photos of Chairman Mao also date from that meeting.

Chinese State Councilor and Foreign Minister Wang Yi on Wednesday said that the friendship between China and Pakistan will be passed on from generation to generation and will not be shaken or changed by a single incident.

Wang made the remarks when meeting with Pakistani Foreign Minister Bilawal Bhutto Zardari via video link, calling on the two sides to thwart any attempt to undermine bilateral ties.

“China will, as always, firmly support Pakistan in safeguarding national sovereignty, security and dignity and in its commitment to national development and rejuvenation,” Wang said, adding that China believes that Pakistan will also firmly stand with China on all issues concerning China’s core interests.

Bilawal said he was glad to have the meeting with Chinese foreign minister as his first official bilateral activity since taking office.

He said that “both the ruling and opposition parties in Pakistan firmly support the bilateral friendship,” which is the consensus shared by Pakistani people. Pakistan firmly upholds the one-China principle and supports China’s positions on issues related to Taiwan, Xinjiang, Tibet and the South China Sea, he said, also expressing complete support for the Belt and Road Initiative, especially the construction of the China-Pakistan Economic Corridor.

The two sides also exchanged views on the safety of Chinese citizens and institutions in Pakistan.

With regard to a series of terrorist attacks targeting Chinese nationals in Pakistan, Wang said China and Pakistan should take immediate action and take firm and effective measures to deal with it.

“The pressing task is to speed up the investigation of the perpetrators and punish them as soon as possible. We should take targeted measures to improve security for Chinese personnel, institutions and projects in Pakistan, give timely security warnings, and plug security loopholes so as to prevent similar incidents from happening again,” said Wang.

China will continue to support Pakistan in enhancing its counter-terrorism capability and is ready to join hands with Pakistan to thwart any attempt of undermining China-Pakistan relations, Wang added.

Bilawal said that Pakistan condemns in the strongest terms the terrorist attack on the Confucius Institute at the University of Karachi. Pakistan firmly opposes all terrorist acts and will bring all criminals to justice, he said.

Pakistan is ready to strengthen cooperation with China to enhance its counter-terrorism capability and ensure the safety of all Chinese citizens in Pakistan, he added.

2 thoughts on “Wang Yi: China-Pakistan friendship will not be shaken”