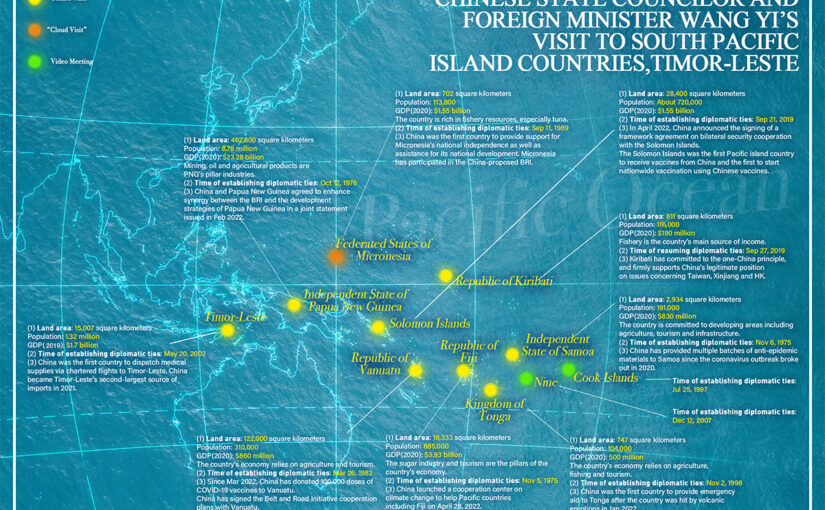 This article by Yang Sheng and Liu Caiyu, originally published in the Global Times, exposes the hypocrisy of Western propaganda regarding China’s expanding cooperation with the nations of the Pacific. This cooperation is taking place in numerous fields, including trade, environmental protection, poverty relief, tourism, education, culture and sports; however, the West chooses to only pay attention to security agreements, implying that China is acting in a hegemonic manner, using Pacific island countries as pawns within a big-power competition with the US. In reality, these countries are finding that China is “a major power which is willing to treat them equally and can provide win-win cooperation and seek no control over them.” This stands in stark contrast to US and Australian hegemonism.

As China and South Pacific island countries are going to strengthen their cooperation to better serve local people’s demand for development, some voices from the West or Western media have started to distort the cooperation and hype the fear of a new “Cold War.” Chinese experts said the US and Australia always see the island countries as their puppets. So when China help them to become  independent and prosperous, the West will definitely feel anxious.

Chinese State Councilor and Foreign Minister Wang Yi will pay an official visit to the Solomon Islands, Kiribati, Samoa, Fiji, Tonga, Vanuatu, Papua New Guinea and East Timor upon invitation from May 26 to June 4, and will also visit Micronesia via video and have a virtual meeting with leaders of Cook Islands and Niue. Observers believe this trip will be a milestone for relations between China and the entire region.

Wang’s trip will cover cooperation and deals in many fields including economy, infrastructure, climate change, public health, policing and security.The reason why China’s presence has been welcomed by the regional countries is that China could promote the livelihood of the locals and  activate the economic potentials of those islands, experts said. However, some Western media have focused only on the cooperation about security, and tried to exaggerate that the cooperation could spark “new Cold War” between China and the West in the region.

“I totally disagree with the saying that the cooperation between China and the South Pacific island countries could spark a ‘new Cold War,'” Chinese Foreign Ministry spokesperson Wang Wenbin said at a routine press conference on Wednesday.

He cited the fact sheet published by the Chinese Foreign Ministry on Tuesday reflecting the broad cooperation between the two sides in the fields of economy, trade, maritime environmental protection, poverty relief, tourism, education, culture and sports and said that “the relationship between China and the island countries has become an example of unity and cooperation between the countries with different scales and political systems.”

Chen Hong, president of the Chinese Association of Australian Studies, told the Global Times on Wednesday that Washington and Australia have been hyping the “China threat” mythology with fabrications of the so-called Chinese military base in the region.

“However, the slightest effort of fact-checking would show that the security cooperation between China and the Pacific Island countries aims to maintain social order as a way to guarantee a stable business environment, to prevent riots and violent disturbance from taking place again,” noted Chen, also director of the Australian Studies Center at East China Normal University.

The Solomon Islands’ security cooperation with China is based on real security concerns. The riots in 2021 incurred huge damage to the country’s public order and political security, and threatened the safety of local people and expatriates, including Chinese businesspeople in the country. So if the security cooperation has brought about anxiety to the West, it means they are trying to harm the independence and safety of the Solomon Islands and other South Pacific Island countries, said analysts.

Penny Wong, Australia’s new foreign minister, said she would travel to Fiji on Thursday, a trip that will coincide with Wang’s tour of the eight Pacific Island countries. According to the Sydney Morning Herald on Wednesday, Wong said that “China has made its intentions clear. So too are the intentions of the new Australian government.”

Chen said Australia apparently regards the South Pacific as its exclusive sphere of influence and has attempted to ostracize China. But China’s successful cooperation with the island countries based on mutual respect and reciprocal benefits has been accepted and welcomed by the island countries. “China believes that countries, no matter big or small, should be treated equally – they are not there for anyone to win over and to control.”

Shen Shishun, an Asia-Pacific expert with the China Institute of International Studies, said that “the most prominent manifestation of Australia’s colonial mentality toward the South Pacific region” is that it always assumes itself as “a leader of South Pacific countries” or “a head in a family” that everyone must obey.

So the idea of Australia developing ties with the South Pacific Island countries is about “control” while China’s idea is based on “win-win cooperation,” and if Australia wants to compete with China in the region, it’s about the competition between “control” and “cooperation,” said analysts.

Yu Lei, chief research fellow at the Research Center for Pacific Island Countries of Liaocheng University, told the Global Times on Wednesday that “Western countries, especially Australia, not only require South Pacific countries to copy the Western political and legal systems, but also force them to become a ‘voting tool’ to serve the West in the international organizations.”

“Western troops or military advisers even have de facto control of some countries’ army and police such as Palau. Economically, the Western countries have made sure they can enjoy priority to exploit local resources such as mining and fishing wantonly,” Yu continued.

The aid from Western countries to the South Pacific, mainly ideological training and indoctrination on civil servants and military or police personnel, is to make sure the governments of these islands are under control, while very few aid was poured into livelihood and local economic development, which is  different from the China’s cooperation with the South Pacific countries, Yu said.

No one wants to be controlled and made use of by others while receiving very limited benefits. So the West, or Australia’s presence in the region, was not welcome. But due to the weak national strengths, the island countries didn’t have many choices in the past, analysts said. But now these countries have found that China is a major power which is willing to treat them equally and can provide win-win cooperation and seek no control over them.

Liu Ze, general secretary of Solomon Islands Chinese Business Council, told the Global Times on Wednesday that Australia in recent months has been refocusing on the Solomon Islands, looking to scale up investment to counter what it claimed as “growing Chinese influence.” But investments from the West do not bear much attractiveness when compared with those from China, a country known for world-leading infrastructure building capacity and the aquatics industry.

“The economic structure of the Solomon Islands has not made any progress in the past 15 years, which made the ruling party realize that cooperating with the West did not result in development. On the other hand, China – home to the world’s most complete industrial and one of the world’s largest markets – could not only be an export destination for the island countries’ products but also aid them to integrate into the global supply chain,” Liu explained.

China could explore the possibility to work with the Pacific Island countries in how to provide them with economic development aid, technical training in climate change, ecological protection of mangroves,  and infrastructure construction such as power, bridge, and roads which are areas that China is particularly good at, Yu said.

Shen believes that cooperation on the COVID-19 epidemic should be a top priority as the pandemic continues to wreak havoc around the world. China could continue to provide necessary aid.

Since the start of the COVID-19 pandemic, China has provided the Pacific Island countries nearly 600,000 doses of vaccines and more than 100 tons of anti-epidemic supplies, according to the fact sheet published by the Chinese Foreign Ministry.

Although China is geographically far from the Pacific Island countries, it has paid great efforts to support relevant countries in disaster prevention and mitigation. In December 2021, the China-Pacific Island Countries Reserve for Emergency Supplies was officially launched in South China’s Guangdong Province, according to the fact sheet.

China provided immediate humanitarian aid when the island countries were hit by natural disasters.In January 2022, a volcanic eruption struck Tonga, which triggered a tsunami and ash fallout. The Chinese government was greatly concerned and acted immediately, making China the first country to provide assistance to Tonga.

Most of this help was ignored by Western media as they were interested only in exaggerating the security cooperation into a sign of “new Cold War” since they are anxious about China getting more popular in the region. But they can’t stop the development of the relations between China and the Pacific Island countries, experts said.

4 thoughts on “China to provide South Pacific countries ‘what US, Australia failed to offer’”