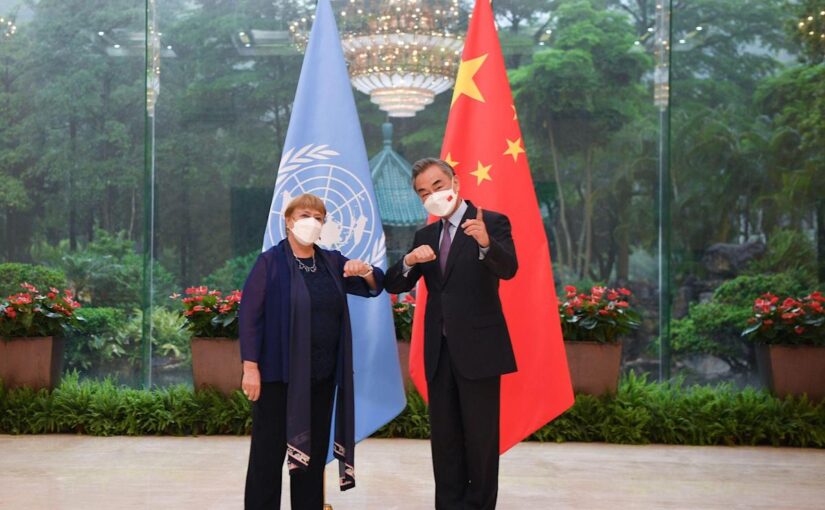 We republish below the media briefing given by Vice Foreign Minister Ma Zhaoxu in relation to the recently-completed visit to China by Michelle Bachelet, UN High Commissioner for Human Rights. Politicians, journalists and various perpetually anti-China human rights groups have for years been clamoring for the UN High Commissioner for Human Rights to visit Xinjiang, in order to substantiate their claims that a genocide is taking place there. Now Ms Bachelet has visited numerous sites and met with many people from all walks of life in Xinjiang – including religious leaders – and has failed to find evidence of genocide, the accusers are doubling down on their slander, claiming the whole visit was staged. Ma Zhaoxu’s media briefing provides a useful summary of what actually happened during Bachelet’s visit.

United Nations High Commissioner for Human Rights Michelle Bachelet visited China in late May. On 28 May, Vice Foreign Minister Ma Zhaoxu gave a briefing on the trip in an interview with the press.

The two sides had extensive, in-depth and candid discussions in the spirit of mutual respect and openness. The Chinese side gave the High Commissioner a comprehensive introduction on the path, philosophy and achievements of China’s human rights development. The two sides exchanged views on global human rights governance, multilateral human rights work, China’s cooperation with the Office of the United Nations High Commissioner for Human Rights (OHCHR) and other issues of common interest.

In Guangzhou, High Commissioner Bachelet visited projects that reflect China’s community-level democracy, poverty alleviation, judicial safeguard, environmental protection, people’s well-being, rights protection of specific groups, and human rights education. In Xinjiang, High Commissioner Bachelet was presented with the measures taken and achievements made in the region on counter-terrorism and deradicalization, social and economic development, ethnicity and religion, and labor rights protection. She also had field trips in Kashgar and Urumqi where she had conversations with people from various communities, including ethnic minorities, academics, and representatives of different social sectors.

With the joint efforts of both sides, the visit achieved positive concrete results.

First, it enhanced understanding on China’s path on human rights development. Since its 18th National Congress, the Communist Party of China (CPC) has united and led the Chinese people to achieve on schedule the first centenary goal of building a moderately prosperous society in all respects and made outstanding achievements in human rights development. In his meeting with High Commissioner Bachelet, President Xi Jinping expounded on major issues regarding China’s human rights development in the context of China’s history and culture, and reaffirmed the principled position of the CPC and the Chinese government in upholding and protecting human rights in all areas. He stressed that, on day one of its founding, the CPC identified as its mission the pursuit of happiness for the Chinese people and rejuvenation for the Chinese nation, and has been working hard for the people’s interests over the past century. The people’s aspiration for a better life is what we are striving for. After decades of strenuous efforts, China has successfully found a path of human rights development in keeping with the trend of the times and China’s national reality. We have been advancing whole-process people’s democracy, promoting legal safeguard for human rights and upholding social equity and justice. The Chinese people now enjoy fuller and more extensive and comprehensive democratic rights.

In Guangzhou’s countryside, High Commissioner Bachelet had a close-up view of China’s whole-process democracy at the community level. At the elderly care center and rehabilitation facility for people with disabilities, she saw how high technology helps facilitate the rights protection of specific groups. At Guangzhou Internet Court, she learned about world leading practices of the judicial protection of human rights in the digital world. In the Fushan Circular Economy Industrial Park, she learned about examples of Chinese enterprises fulfilling social responsibilities such as promoting environmental protection and sustainable development. During her speech at the Guangzhou University, she discussed with the faculty and students on respecting and safeguarding human rights.

The Chinese side stressed that the historic achievements testify to the success of China’s path of human rights development. We remain committed to this path which we believe will lead to an even more promising future.

The Chinese side gave a comprehensive briefing to Ms. Bachelet on China’s active engagement in global human rights governance. China has earnestly fulfilled its international obligations in the area of human rights. China has signed 29 international human rights instruments and is widely recognized as a role model in implementing conventions. China has served as a member state of the United Nations Human Rights Council (UNHRC) five times, one of the most among all the countries. We put forward a series of proposals on promoting human rights through development, promoting human rights through cooperation, addressing the negative impact of the legacies of colonialism on the enjoyment of human rights, rejecting racism and racial discrimination, promoting the fair distribution of vaccines and rejecting unilateral coercive measures. This has received wide support from the international community, especially the developing countries.

The Chinese side pointed out that the promotion and protection of human rights is a common cause for humanity. Global human rights governance must be conducted through dialogue and consultation, and the achievements of human rights development must be shared by the people of all countries. China will continue to uphold true multilateralism, stand on the right side of history, and continue active human rights dialogue and cooperation with all parties to expand consensus, reduce differences, and promote mutual learning and common progress.

Fourth, it provided an opportunity to observe and experience first-hand a real Xinjiang. For a period of time, certain western countries and anti-China elements, under the disguise of human rights, have fabricated many sensational palpable lies on the so-called Xinjiang-related issues, only to fulfill their political motive of using Xinjiang to contain China. The Chinese side pointed out that essentially, Xinjiang is not at all a human rights issue, but a major issue concerning upholding national sovereignty, security and territorial integrity. All ethnic groups of Xinjiang belong to the family of the Chinese nation. A few years ago, in response to the serious challenge of terrorism and religious extremism in Xinjiang, we have adopted lawful measures to combat violent terrorism, protecting lives and property for all, and safeguarding human rights of all ethic groups across the region. Through unremitting efforts, the region has enjoyed security, stability, development, and prosperity, and there has been no violent terrorist attack in Xinjiang for five consecutive years. People that have visited Xinjiang all found that the Xinjiang they saw is completely different from the one demonized in the western media.

Clouds cannot overshadow the sun, and truth will debunk all lies. China has made clear its stern position on the so-called Xinjiang report, and resolutely opposes smearing and attacking China with lies and disinformation. It needs to be pointed out that certain Western countries, out of ulterior motives, went to great lengths to disrupt and undercut the High Commissioner’s visit, their plot didn’t succeed.

Ma Zhaoxu stressed in the end that in terms of human rights protection, no one can claim perfection and there is always room for improvement. China will unswervingly follow the human rights development path that suits its national conditions, and advocate the shared values of humanity, including peace, development, equity, justice, democracy and freedom. China stands ready to cooperate with the OHCHR and others on the basis of equity and mutual respect, to actively carry out international human rights exchange and cooperation, enhance participation in global human rights governance, and jointly contribute to the sound development of international human rights and to the community with a shared future for mankind.