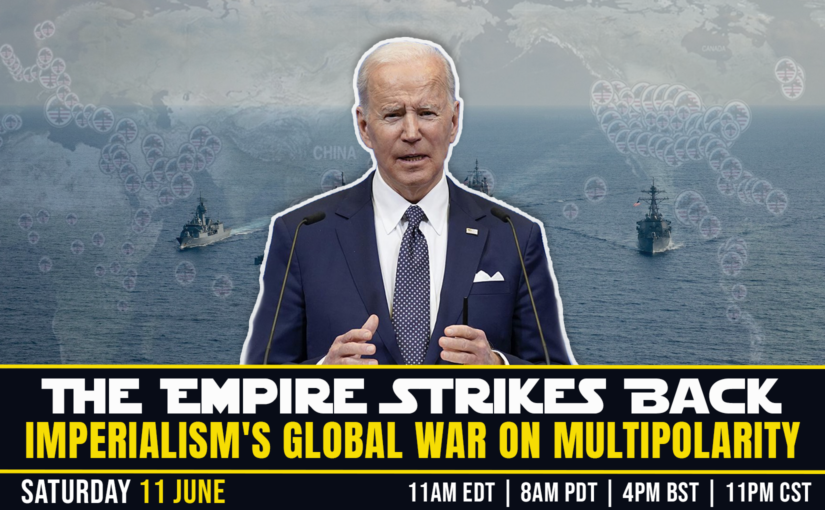 Our webinar The Empire Strikes Back – Imperialism’s global war on multipolarity took place on Saturday 11 June 2022, addressing the latest developments in international politics, particularly around NATO, AUKUS, the war in Ukraine, and the increasing militarization of the US-led New Cold War. The full set of videos is embedded below.

Radhika Desai: Pluripolarity is indispensable to the project of undermining imperialism

Victor Gao: China’s successes are based on its socialist system; its focus on peace and development

Ding Yifan: We must mobilize social forces to unmask and oppose the US’s wars and proxy wars

Rob Kajiwara: China doesn’t seek domination of Okinawa or Guam or Hawai’i or other Pacific islands

Mustafa Hyder Sayed: The US needs to understand that the world rejects a New Cold War

Chris Matlhako: In a time of crisis, unite against the forces of colonialism, neoliberalism, fascism

Ju-Hyun Park: The US opposes Korean reunification because it would undermine US regional domination

Sara Flounders: The socialist countries are leading the way in terms of meeting humanity’s needs

Danny Haiphong: US imperialism’s war on multipolarity is a war on self-determination and sovereignty

3 thoughts on “Videos: The Empire Strikes Back – Imperialism’s global war on multipolarity”