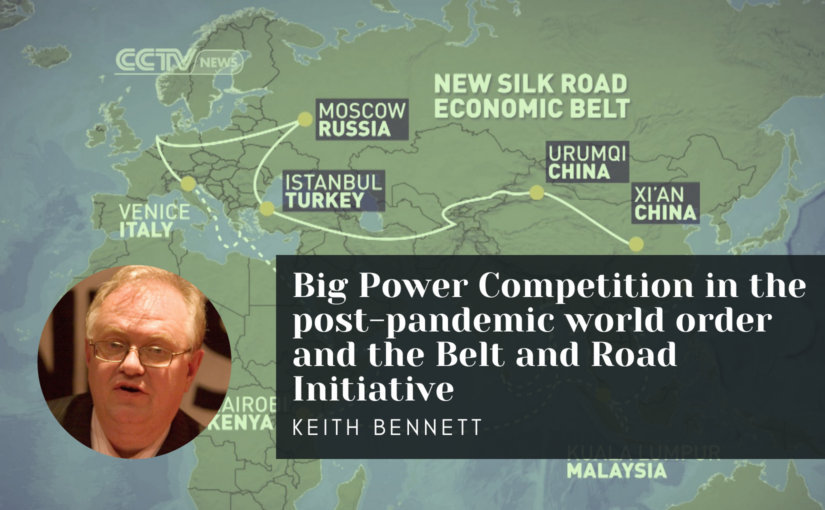 As part of its Friends of the Silk Road Series, the Pakistan China Institute organised a webinar on the theme, ‘Big Power Competition in the Post-Pandemic World Order and the Belt and Road Initiative’ on June 20th. Co-Editor of Friends of Socialist China Keith Bennett made a presentation on ‘What to Expect in big power competition – how the Global South Should Respond’. We print his remarks below.

The event was chaired by Tehmina Janjua, former Foreign Secretary of Pakistan. The other speakers were Senator Mushahid Hussain Sayed, Chairman of the Defence Committee of the Pakistan Senate and of the Pakistan China Institute; Mustafa Hyder Sayed, Executive Director of the Pakistan China Institute; Jayanath Colombage, former Foreign Secretary of Sri Lanka and former Commander of the Sri Lankan Navy; Suos Yara, Member of the Central Committee of the Cambodia People’s Party, Spokesperson and Vice-Chair of its Commission for External Relations, as well as member of the National Assembly of Cambodia and Chairman of its Commission of Foreign Affairs, International Cooperation, Media and Information; Wang Wen, Executive Dean of the Chongyang Institute for Financial Studies at Beijing’s Renmin University; and William Jones, Senior Non-Resident Fellow of the Chongyang Institute.

The full event stream is also embedded below.

Thank you to the Pakistan China Institute for your invitation to speak at this important and timely webinar. And thank you for your consistent and sincere support to Friends of Socialist China which we greatly value.

It is nearly 33 years since the fall of the Berlin Wall. And nearly 31 years since the red flag was lowered from the Kremlin and the USSR ceased to exist. Such was the air of triumphalism that one political philosopher was even moved to declare the end of history.

Regarding the bigger countries outside the imperialist camp, Russia was treated as a humiliated and defeated nation. Its people impoverished. The promise that there would be no NATO expansion broken not once but five times. An essential background for anyone wishing to understand Russia’s current special military operation in Ukraine.

In the case of China, the People’s Republic was not yet the economic, political and military power that it is today. It was still appropriate to follow Deng Xiaoping’s maxim of not taking the lead, biding one’s time and concealing one’s strength. And, despite the defeat of the attempted counter-revolution in 1989, there were still many in the west who pinned their hopes on an evolution, peaceful or otherwise, to capitalism and on the demise or transformation of the Communist Party of China.

How different the situation looks in 2022.

Under President Putin, Russia stabilised its society, rebuilt its economy and restored the country’s self-respect.

The transformation of China, particularly since the 18th Party Congress in 2012, has of course been completely phenomenal.   China is now the world’s second largest economy, the largest by some methods of calculation, extreme poverty has been eliminated, and the country is well on the road to becoming a great, modern, democratic, prosperous, civilised and beautiful socialist country.

And China is, as Comrade Xi  Jinping said at the 19th Party Congress, “moving closer to centre stage and making greater contributions to humanity.” Socialism with Chinese characteristics, he further pointed out, “offers a new option for other countries and nations who want to speed up their development while preserving their independence.”

Today, no major problem in the world is capable of solution without the active involvement of China.

For its part, the US has seemingly ripped up decades of the Kissinger and Brzezinski playbooks, which, with it must be said considerable success, had sought to shore up US hegemony by ensuring that Moscow and Beijing remained divided and exacerbating that division to the greatest possible extent.

Instead, determined, with just a slight blip under President Trump, to promote aggressive, hostile, and confrontational policies towards both these great powers, the US, together with a handful of followers, has succeeded only in driving Russia and China closer together, to the extent that they now describe themselves as closer than allies and affirm that their friendship has no limits.

For the other countries of the Global South, whilst they are still gravely challenged and threatened by the imperialist powers, and still face manifold difficulties, these developments open up a range of opportunities and possibilities.

A key example is the decisive military action taken by Russia at the request of the Syrian Arab Republic to defend that country from fundamentalist terrorism and its external backers.

On the diplomatic level, one could cite the repeated joint vetoes cast in the United Nations Security Council by Russia and China in support of Syria and the very welcome recent first joint China/Russia veto, countering the US move to impose further sanctions on the Democratic People’s Republic of Korea.

On the economic front, China’s Belt and Road Initiative, the greatest investment and infrastructure programme and opportunity in history, holds out the possibility of development of the national economy, enhanced connectivity, and improvement of people’s living standards in countries across the Global South and even beyond.

On my visit to Pakistan in 2017, from Karot to Gwadar, I was able to see the transformative potential and reality of the BRI’s flagship China Pakistan Economic Corridor.

Indeed, the all-weather friendship and iron brotherhood between China and Pakistan is a true model for relations between developing countries and neighbouring countries with different social systems.

That this relationship is not hostage to domestic political circumstances can be seen from Foreign Minister Bilawal Bhutto Zardari making China the destination for his first official bilateral visit.

Faced with both the challenges and opportunities presented by the current global situation the countries of the Global South need above all to reinforce and strengthen their unity and solidarity – politically, diplomatically, economically, militarily, culturally, scientifically, and socially.

Particular importance should be attached at this stage to economic cooperation, for example through increased trade, mutual investment and joint ventures, the creation of free trade areas, regional integration, and so on. A key link is to break the international hegemony of the US dollar. The introduction of currency swap arrangements, new international payments systems and mechanisms, the internationalisation of the RMB, the creation and development of sovereign digital currencies, such as that initiated by China, non-dollar pricing and trading of key commodities, and moves to develop regional common currencies, such as the recent such initiative by the Economic Community of West African States (ECOWAS), are all vital to economic development and especially to overcome the truly genocidal use of unilateral sanctions, along with the freezing and outright theft of foreign exchange and gold reserves, property and other assets that, from Afghanistan to Venezuela to Russia, are being increasingly used to blackmail, bully, threaten, cajole, punish and economically cripple both sovereign states and their nationals.

The Global South needs to put up the banner of collective self-reliance. In this regard, the Non-Aligned Movement needs to be further revived and strengthened as a universal organisation of the Global South. Non-alignment is not neutrality. It is the collective independent space in world affairs created by the countries of the Global South themselves. In this regard, we commend, in particular, the work of the immediate past chair of the NAM, Bolivarian Venezuela, and its current chair, Azerbaijan, and attach positive significance to last week’s visit to Baku by Venezuelan President Maduro.

The countries of the Global South of course vary widely – in size, population, level and stage of economic development, social and political system, religious belief, culture and so on. But they all share a legacy of imperialist or colonial bullying and oppression, and they all also share the common tasks of maintaining their independence, developing their national economies, and improving their people’s livelihood. The differences between the countries of the Global South should not be used or allowed to divide them. Unity is strength.

Thank you for your attention.