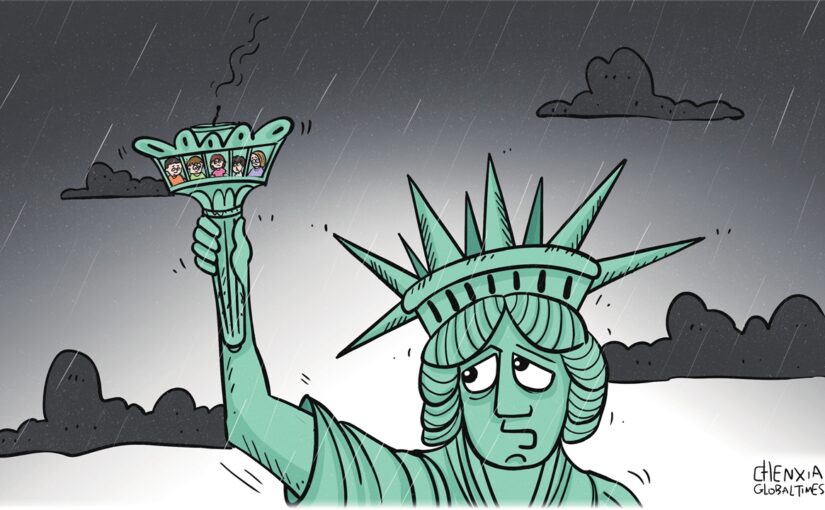 The following article by Friends of Socialist China co-editor Danny Haiphong, originally carried in the Global Times on 3 July 2022, addresses the recent implementation of the Uyghur Forced Labor Prevention Act, effectively imposing a blanket ban on goods produced in Xinjiang. Danny notes the startling hypocrisy of the US – the global capital of prison labor and modern slavery – slandering China on this basis. He further points to the two central motivations for the ‘China Bad’ narrative: firstly, creating a scapegoat for the steadily worsening problems of contemporary US capitalism; secondly, increasing demand (and thereby profits) for the military-industrial complex. What is abundantly clear is that ordinary people in the US have absolutely nothing to gain from the ruling class’s New Cold War.

US President Joe Biden has begun enforcing the Uyghur Forced Labor Prevention Act that was passed in late 2021. The legislation is comprised of a set of economic sanctions that represent some of the broadest the US has leveled upon China since the normalization of relations between the two countries. This includes a ban on all imported goods from the Xinjiang Uygur Autonomous Region and a US Department of Commerce review of all goods produced outside of the region that may have connections to economic institutions in Xinjiang. These measures have been justified by Biden and the US political establishment as a measured response to China’s use of “forced labor” in Xinjiang, particularly of its Uygur minority ethnic group. Allegations of forced labor in the region have never been proven and both foreign companies and Uygur workers alike have denied its existence.

That the US would attempt to punish China over forced labor is a clear act of imperial projection. Forced labor is a serious problem in the US. According to a new report from the American Civil Liberties Union, US prisoners produce more than $11 billion in profits and services despite being paid an hourly wage of between $0.13 and $0.52. Seven states were found to pay no compensation for prison labor. Prisoners cited that punishment in the form of solitary confinement and family visitation was routinely employed against those who refused to work.

Forced labor in US prisons is far from coincidental. The Constitution of the US allows for slavery and involuntary servitude as a form of criminal punishment under the 13th Amendment. More than 1.2 million people are serving sentences in state or federal prisons, two-thirds of which are engaged in some form of labor. Furthermore, ethnic and racial minorities such as African-Americans make up the majority of the US prison population. Forced labor in US prisons thus targets specific social groups.

In other words, everything that the US has alleged of China in relation to forced labor is a routine policy in US prisons. Such hypocrisy is nothing new. The US possesses 25 percent of the world’s prisoners and just five percent of the world’s population. Yet prominent US media and politicians repeatedly hype the “threat” of “authoritarianism” from China. The US spends more on its military than the next nine countries combined yet US officials such as Defense Secretary Lloyd Austin regularly claim that China is the one acting “aggressively.”

These examples of imperial projection are not without consequence. The US’ decision to enact widespread sanctions on China’s Xinjiang region not only threatens the livelihoods of Uygur workers but also carries the danger of worsening climate change. Xinjiang possesses nearly half of the world’s solar grade polysilicon, the base material for solar power used around the world. Furthermore, the US’ aggressive economic measures toward China are part and parcel of a dangerous geopolitical trend. A consensus has grown in the US foreign policy establishment that China must be treated as an adversary rather than a partner, leading to reckless military escalations in the Asia Pacific region and a ceaseless propaganda blitz in the Western media which has only fanned the flames of hostility.

Imperial projection toward China serves two key functions for the US foreign policy establishment. Negative attention on China creates a convenient scapegoat for domestic ills. The US is experiencing a deepening crisis of legitimacy that is only being worsened by high inflation, the reversal of legal protections for abortion rights, and the concerning frequency of deadly mass shootings. Furthermore, imperial projection serves as a catalyst for the narrow interests of war profiteers. An aggressive policy toward China boosts the short-term profits of US defense contractors and their investors at the expense of the long-term interests of humanity.

The US is in dire need of a course correction. China has made clear that it seeks cooperation with the US as it continues to walk along its socialist development path toward common prosperity and world peace. Instead of continuing on its dangerous path of war with China, the US would be better served addressing the economic and social ills tearing its own society apart. But this would require political leadership’s willing to trade in narrow elite interests for the good of humanity. And no such leadership exists within the US political system at this time.