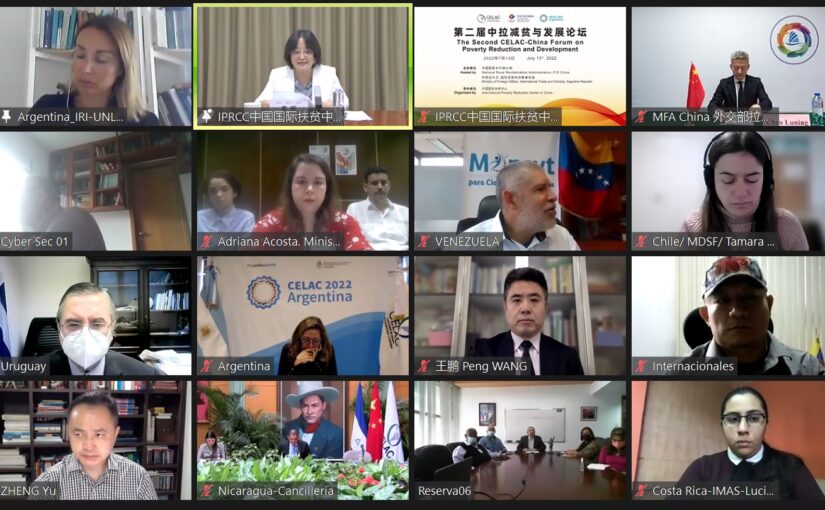 China and the countries of Latin America and the Caribbean have agreed to cooperate more closely in poverty reduction, especially through post-pandemic economic recovery, infrastructure construction and digital technology, following the second Forum on Poverty Reduction and Development between China and CELAC (Community of Latin American and Caribbean States), held virtually last week.

Stressing the urgency of the tasks in hand, an Argentinian delegate noted that: “The epidemic has exacerbated social inequality and brought a devastating impact on the most vulnerable. We need to find solutions through bilateral and multilateral cooperation.”

Two days before the meeting, Nicaragua’s Trade and Industry minister announced that his government was expediting the conclusion of a Free Trade Agreement with China.

The following report is reprinted from Global Times.

China and Latin American and Caribbean countries have agreed on deeper cooperation in poverty reduction, with joint efforts in areas such as post-pandemic economic recovery, infrastructure construction and digital technology, officials and experts said at the second Community of Latin American and Caribbean States (CELAC)-China Forum on Poverty Reduction and Development, held virtually on Wednesday.

At the forum, officials and experts from CELAC also praised China’s efforts to eradicate absolute poverty, especially through rural-urban integration and digital technology support, which are seen as valuable for Latin American countries to alleviate poverty and promote the implementation of the 2030 Agenda for Sustainable Development.

CELAC estimates that the number of people living in extreme poverty rose by about 5 million between 2020 and 2021 due to the deepening of the social and health troubles prompted by the COVID-19 pandemic, official data showed in January.

As part of the cooperation in addressing rising poverty, China and CELAC will work jointly to ease the negative effects of the pandemic. China’s efforts to ensure broad access to vaccines, donate medical supplies, and offer supports to fortify local health systems, which are key to the recovery, are widely recognized and applauded by representatives from the UN and CELAC countries.

China’s efforts to help Latin America and Caribbean countries via medical donations and vaccine offers have been widely recognized by countries across the region.

China is the first and largest vaccine supplier to many Latin American countries, and has carried out joint research, development and production cooperation with many countries in the region on COVID-19 vaccines, drugs and medical equipment.

About 80 percent of the world’s extreme poverty is concentrated in rural areas, which are less resilient to the pandemic and are at higher risk of falling back into poverty. How to enhance rural resilience and maintain a rural-urban development balance is a common challenge for China and Latin America, said experts at the forum.

“The epidemic has exacerbated social inequality and brought a devastating impact on the most vulnerable. We need to find solutions through bilateral and multilateral cooperation,” said Gustavo Martínez Pandiani, undersecretary for Latin American and Caribbean Affairs in Argentina’s Ministry of Foreign Affairs and National Coordinator of the CELAC, at the forum.

World Bank data in 2021 showed that the COVID-19 has magnified the damaging effects of inequality in the Latin America and Caribbean region, and more than half (54.4 percent) of the region’s workers are in the informal sector.

China, in its completed drive to eliminate absolute poverty, has launched a rural revitalization strategy to achieve a balanced urban and rural development. China and CELAC countries share typical characteristics in multidimensional poverty, and there is great room for cooperation in rural revitalization, experts noted.

China has accumulated a wealth of knowledge and experience in rural poverty reduction, especially in infrastructure and public services such as safe drinking water, education, electricity and food, which can offer valuable lessons for Latin American countries, said Wang Peng, director of Development and Strategy Research Office at the Institute of Latin American Studies at the Chinese Academy of Social Sciences.

“Infrastructure is key to increasing the productivity of a country, and with its salaries and employment, which in turn helps to reduce poverty. China has a great experience on building quality infrastructure and has had construction projects in Latin American countries that have allowed them to increase their productivity. I hope that cooperation is strengthened in order to continue the reduction of poverty in Latin America,” Andres Zambrano, an associate professor at the University of The Andes, Colombia, told the Global Times.

The China-proposed Belt and Road Initiative (BRI) has made steady progress in Latin America over the past three years, which has brought concrete benefits to regional economies such as enhanced connectivity, both physical and digital.

The BRI, the Global Development Initiative and the China-CELAC Joint Action Plan for Cooperation in Key Areas (2022-2024) will be the policy basis for future China-CELAC cooperation in poverty reduction, building a community of shared future for mankind that is free of poverty, María Francesca Staiano, director of China Studies Center of National University of La Plata, Argentina, told the Global Times.

The application of digital technology, which has greatly contributed to China’s poverty reduction, has also become another focus of the forum, as Latin American countries have begun to use digital technology in reducing inequality, promoting inclusiveness and increasing economic opportunities in recent years.

The COVID-19 pandemic has driven the widespread use of digital technologies. In the post-pandemic era, digital technology will exert greater potential to promote economic transformation, create a boom in the digital economy and achieve fair distribution, which requires unremitting efforts of all countries, Francisco Durán, vice-minister of research and knowledge application, Venezuela, said at the forum.

China and Latin American countries have shown mutual understanding and support on issues concerning each other’s core interests and major concerns, and cooperated closely within the frameworks of the UN, the G20 and APEC, thus effectively safeguarding the interests of developing countries, said Chen Luning, deputy director-general of the Latin American and Caribbean Affairs Department of the Ministry of Foreign Affairs of China.

Trade between China and CELAC hit a record high of $451.6 billion in 2021. China is the third-largest source of investment in Latin America, and Latin America is the second-largest destination for China’s overseas investment. Over 3,000 Chinese enterprises have invested in Latin America and the two sides have actively promoted cooperation in emerging areas such as big data, artificial intelligence, 5G, the internet and clean energy, to inject new momentum into China-CELAC cooperation, data shows.

“We hope to attract more Chinese enterprises to invest in Nicaragua through various projects and frameworks to further contribute to poverty reduction,” Ivan Acosta Montalvan, minister of finance and public credit of the Republic of Nicaragua, said at the forum.

Nicaragua and China restored diplomatic ties at the end of 2021.

Yu Bo, counselor of the newly reopened Chinese Embassy in Nicaragua, told the Global Times in a recent interview that local people speak highly of China’s contribution and positive role in the region, as China has injected a lot of economic vitality and livelihood development projects into the country.

More than 80 representatives and officials from the Latin American and Caribbean affairs department of the Chinese Ministry of Foreign Affairs, UN, three organizations in Latin America and other 22 CELAC member countries attended the forum that was hosted by the National Rural Revitalization Administration, created earlier in 2021 to facilitate the national rural vitalization strategy, alongside the International Poverty Reduction Center in China.

2 thoughts on “China, CELAC to deepen cooperation on poverty reduction in fresh sign of growing ties”