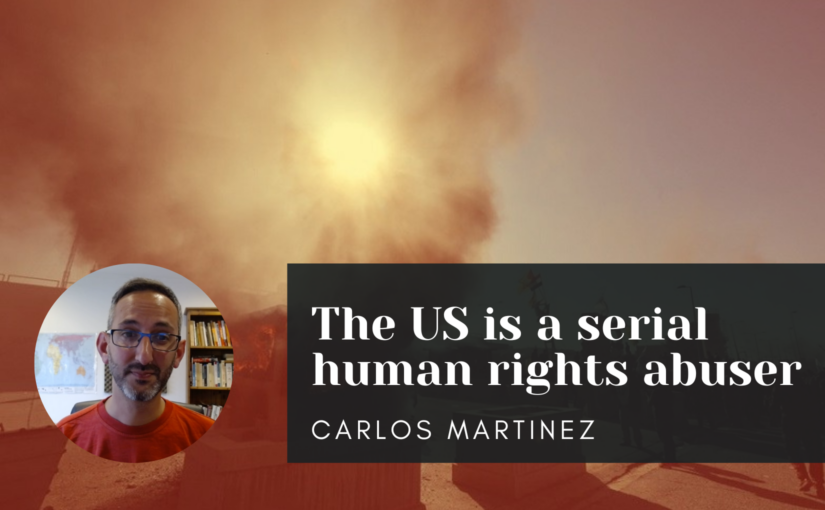 The following article by Carlos Martinez, written for the Chinese magazine China Today (founded under the name China Reconstructs by Soong Ching-ling in 1952), comments on the recent report issued by the China Society for Human Rights Studies (CSHRS) entitled U.S. commits serious crimes of violating human rights in the Middle East and beyond. Carlos discusses the irony of the US having such a disastrous human rights record at home and abroad, given that “it so often frames its aggressive foreign policy precisely within a context of human rights.” He further contrasts the US’s record with that of China, concluding that “the West’s attempts to smear China as a human rights abuser – and to portray the U.S. and its allies as upholders of freedom and democracy – are nothing but the hypocritical lies of a collapsing hegemonic world order.”

The latest report from the China Society for Human Rights Studies (CSHRS), entitled “U.S. commits serious crimes of violating human rights in the Middle East and beyond,” provides a detailed assessment of the United States’ human rights record, particularly in relation to its wars and regime change operations in the Middle East.

Noting that U.S. imperialism has caused “permanent damage and irreparable losses to countries and people in the region,” the report highlights a valuable lesson to be learned by the peoples of the world: that the pervasive Western narrative of democracy and human rights is nothing but a façade, behind which lies hegemony, inequality, cruelty and violence.

A great irony of the U.S.’ record of human rights abuses is that it so often frames its aggressive foreign policy precisely within a context of human rights. For example, in early 2011, journalists and politicians in the West loudly raised their voices about the abuses supposedly being perpetrated by the government of Muammar Gaddafi in Libya. They spread numerous stories: that the government was preparing a massacre in Benghazi; that sub-Saharan Africans were being forced to fight for the government; that Gaddafi was instructing pro-government troops to use rape as a weapon of war.

All these claims were comprehensively debunked, but they had the effect of building public support in the West for a war in which tens of thousands of people were killed and a whole country was destroyed. Libya had been the country with the highest development level in all of Africa (measured in terms of income, life expectancy, literacy, and access to modern energy, clean water, education and healthcare). The war meant that its entire infrastructure was wiped out and its development was set back by several decades.

So the war for human rights in Libya was in fact a war for the West’s economic and geostrategic advantage; its human rights effect was to destroy the fundamental rights of millions of ordinary Libyans.

The U.S. is currently constructing a gigantic slander campaign against China, claiming that a genocide (or “cultural genocide”) is being carried out against Uygur Muslims in Xinjiang. On the basis of spurious reports and data analysis produced by a handful of professional anti-communists and paid representatives of the military-industrial, Western governments and media outlets are attempting to turn China into a human rights abuser in the eyes of the peoples of the world.

Is this propaganda war being fought in the interests of Muslim people? As exposed all too clearly by the CSHRS report, the U.S. and its allies have shown a flagrant disregard for the rights of Muslims in Afghanistan, Iraq, Libya, Syria, Yemen and elsewhere, and it is therefore somewhat difficult to believe that any concern for Uygurs is based on altruistic motives.

Rather, the propaganda around Xinjiang is intimately connected with the U.S.-led “New Cold War” on China – a project of hybrid warfare designed to slow down China’s rise, to maintain U.S. hegemony and prevent the emergence of a multipolar world.

China’s rise and success, its emergence as the world’s largest economy, its rapid development in science and technology, its leading role in the battle against the pandemic, its crucial role in the fight against climate breakdown, its orientation towards the Global South and the developing world – all constitute a threat in the eyes of the Western powers.

Far from promoting human rights, this “New Cold War” is ultimately directed against the entire developing world, against the Global South, and against the idea of a democratic, multipolar system of international relations based on cooperation, peace, sovereignty and non-interference. As such, it should be considered as a global war on human rights.

If the U.S. had any meaningful interest in human rights, it would address the shameful violations taking place at home. Poverty levels in the U.S. are rising. Millions of people don’t know where the next meal is coming from. Hundreds of thousands are homeless. Racial discrimination is rampant. There are around two million people in the U.S. in prison – the highest incarceration rate in the world – with a vast over-representation of the black, indigenous and Latin American communities. Well over one million people have died from COVID-19.

There are dozens of urgent human rights issues in the U.S. that need to be resolved. Sadly the political system is organized in a way where there is a strong correlation between wealth and power. In this self-proclaimed democracy, control of government alternates between two major political parties, both of which represent the interests of a small capitalist elite and have only marginal interest in addressing the concerns of ordinary people. As such the U.S. is suffering a long-term human rights crisis rooted in its plutocratic nature.

China by contrast enjoys an impressive human rights record, which continues to improve all the time. In terms of its international relations, China pursues a policy of non-interference and mutually beneficial cooperation, with a particular focus on development and improving people’s livelihoods. China does not go to war in support of its economic or political aims; indeed it hasn’t been involved in a war for more than 40 years.

In place of hegemony, war, sanctions and coercion, China offers trade, investment and solidarity. The Belt and Road Initiative, for example, is already bringing modern energy and infrastructure to large parts of Central Asia, South Asia, Southeast Asia, the Middle East, Africa, Latin America and the Caribbean. This in itself is an important contribution to global human rights.

Domestically, China has eliminated extreme poverty, has concentrated enormous resources on suppressing COVID-19, has expanded development and infrastructure throughout the country, and is building a new era of fairness and common prosperity. For these reasons, the Chinese government is enormously popular among China’s population.

It is increasingly obvious to the peoples of the world that the West’s attempts to smear China as a human rights abuser – and to portray the U.S. and its allies as upholders of freedom and democracy – are nothing but the hypocritical lies of a collapsing hegemonic world order.

2 thoughts on “The US is a serial human rights abuser”