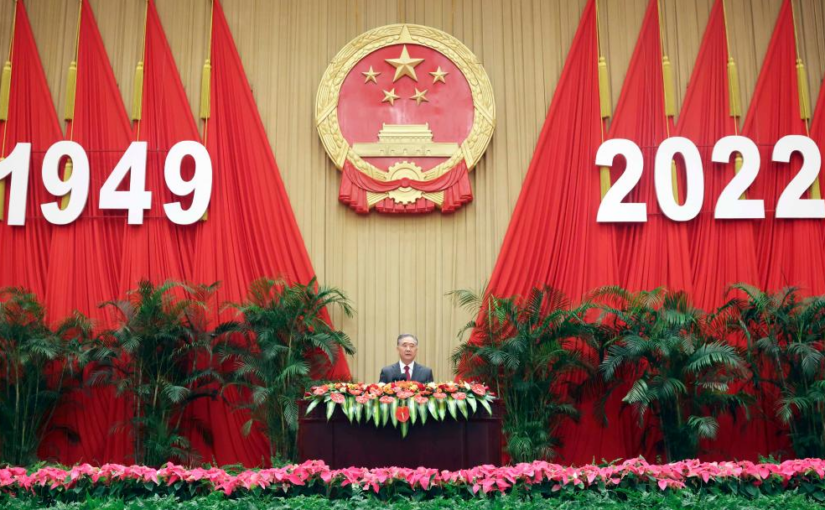 We are pleased to reproduce this article by Stephen Millies, originally carried by our US comrades of Struggle/La Lucha greeting the 73rd anniversary of the founding of the People’s Republic of China and celebrating the struggles and achievements of the Chinese revolution.

Since Mao Zedong declared that “the Chinese people have stood up”, Stephen notes, life expectancy has more than doubled, surpassing that in the US. Illiteracy, which stood at some 80% at the time of liberation, has been virtually eliminated. Thirty-seven million people attend university. 52% of them are women.

Noting the centuries-long confrontation between China and imperialism, the author notes that imperialist hatred has only increased in the face of the socialist country’s achievements. The terrible wars in Korea and Indochina were a key part of US imperialism’s response to the Chinese revolution, as was McCarthyism at home. Refuting some of the key anti-China smears used to confuse working and oppressed people in the United States, Stephen concludes: “Our enemy is high rents, police brutality and mass incarceration. We need what China has: a socialist revolution.”

When the People’s Republic of China was born on Oct. 1, 1949, the country was devastated by years of war. At least 20 million Chinese people were killed. Starvation stalked the land.

The Chinese Revolution swept that misery away. Seventy-three years after Mao Zedong declared that “China has stood up,” look at what socialism has accomplished:

None of these achievements would have been possible without a socialist revolution led by the Communist Party of China.

These great advances have made China even more hated by the imperialists whose troops plundered China during a century of humiliation. British colonialists fought the Opium Wars to enslave Chinese people with drug addiction.

One of the biggest drug pushers was a Yankee merchant named Warren Delano. His family’s dope fortune helped put his grandson, Franklin Delano Roosevelt, in the White House.

Even before 1776, U.S. capitalists in seaports like Marblehead and Salem in Massachusetts dreamed of the riches of China. FDR got the U.S. ruling class into World War II with the prospect of grabbing all of China.

The Chinese Revolution stopped that colonial nightmare. The anti-communist witch hunt led by Senator Joe McCarthy demanded to  know “who lost China?” It was “lost” to the Chinese people, led by their communist party.

Wall Street greeted the People’s Republic of China by instigating the Korean War. As a result, millions of Korean people were killed. Koreans were burned alive by napalm and phosphorus bombs like those dropped later on the Vietnamese and Laotian people.

Thousands of Chinese volunteers died beside their Korean comrades, including Mao Anying, a son of Mao Zedong. U.S. General Douglas MacArthur wanted to drop dozens of atom bombs on both China and Korea

Today, the Pentagon’s “Pivot to Asia” is aimed at the People’s Republic of China along with thousands of U.S. nuclear missiles. President Biden says he will go to war if China recovers Taiwan province.

Taiwan was stolen from China by the Japanese Empire in 1895. The U.S. invaded the Philippines three years later, killing a million Filipino people.

Both colonial conquests will be avenged. Taiwan will be reunited with China.

Harry Anslinger, the first commissioner of the U.S. Treasury Department’s Federal Bureau of Narcotics during the presidencies of Hoover, Roosevelt, Truman, Eisenhower, and Kennedy, was a racist pig. He targeted jazz musicians, especially singer Billie Holiday after her 1939 song “Strange Fruit.” Anslinger assigned a special agent to get Holiday; she died while being chained to a hospital bed under Anslinger’s orders.

In the 1950s, Anslinger claimed that China was shipping tons of heroin to the U.S. This big lie was a cover-up for the CIA’s “French Connection” drug ring.

It paved the way for the Pentagon to flood the Black and Latinx communities with heroin. (See “The Politics of Heroin in Southeast Asia” by Alfred McCoy.)

This success hasn’t prevented the capitalist media from attacking China for its absolutely necessary public health measures. These have included closing entire cities for a time to stop the spread of COVID-19.

In contrast, big drug outfits like Pfizer and Moderna delayed supplying vaccines to developing countries in Africa, Asia and Latin America. This accelerated the coronavirus mutations.

Another big lie is that China is responsible for destroying millions of jobs in the United States. General Motors shut nine of its ten plants in Flint, Michigan. Not China.

Our enemy is high rents, police brutality and mass incarceration. We need what China has: a socialist revolution.

Happy birthday to the People’s Republic of China.