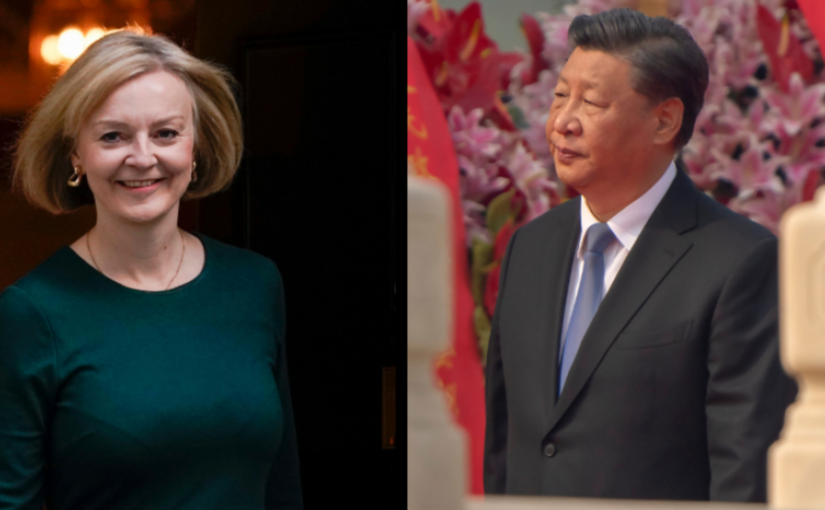 This important article by Jenny Clegg, academic and campaigner with CND and Stop the War Coalition (and member of the Friends of Socialist China advisory group), analyses the foreign policy of the current British government, led by Prime Minister Liz Truss. Jenny notes that Truss is known for her “extreme hawkishness and a highly ideological world view” and has adopted an aggressively anti-China stance, viewing China as a threat to the so-called rules-based international order.

However, Truss and her team are also facing an extremely difficult and complex economic situation, and “questions will surely be raised from the business community as to the wisdom of jeopardising economic ties with the world’s second largest economy.” Jenny writes that at least 150,000 British jobs are connected to economic links with China, and hence it would be prudent for the government to reconsider its alignment with the US-led New Cold War. Certainly ordinary people in Britain have nothing to gain from this adventurism. Jenny concludes that the people of Britain should exert pressure on their government to adopt a sane policy in relation to China: “No way should we allow these extreme reactionaries to march us into a US-led war with China, a war bringing two nuclear-armed states into face-to-face combat.”

This article first appeared in the Morning Star.

Liz Truss, in her first international speech as prime minister at the UN, called on the G7 and “like-minded countries” to join together to limit the influence of “authoritarian aggressors.” Meeting with President Joe Biden later, she clarified her plans “to ensure Britain is fully equipped to tackle the evolving challenge from countries like China and Russia.”

Truss talks of “refreshing” the Integrated Review, which outlines British priorities in diplomacy and defence over the coming decade, to elevate the designation of China in particular from “systemic competitor” to an “acute threat” on a par with Russia.

It is clear she brings to her new role as head of government an extreme hawkishness and a highly ideological world view.

She believes in a “strong and outward-reaching Global Britain,” proposing to boost defence spending from 2 to 3 per cent of GDP by 2030 to back this. She has vowed “to push Russia out of the whole of Ukraine” and has called for Nato to “go global” to tackle “worldwide threats.”

In her previous posts as international trade secretary and then foreign secretary, she advanced Britain’s Indo-Pacific tilt promoting military and military-industrial links with the region, and indeed it was she who signed the Aukus pact to supply Australia with the technology to build nuclear submarines aimed at containing China.

Truss views China as a threat to the “rules-based international order,” and calls for the G7 to form an “economic Nato” so as to play an even a greater role in rule-making.

Following Nancy Pelosi’s visit to Taiwan and China’s response conducting military exercises around the island — a part of China after all — Truss summoned the Chinese ambassador to explain his country’s “increasingly aggressive behaviour.” For Truss, representative of a serial war fighter, to lecture a government that has not fought a war in over 40 years really takes the biscuit.

China has consistently expressed a preference to achieve reunification with Taiwan by peaceful means but has not ruled out the use of force in the very last resort. This would target “foreign forces” conspiring to interfere. Indeed, the recent military exercises were considered by experts to be a deterrence operation rather than a rehearsal for military takeover — a “hint to the US that this is how we will sink your carriers.”

Truss enlisted the “anti-China hawks” to her campaign and now Tom Tugendhat, from the cross-party China research group, has been rewarded as minister for security under the Home Office, with a fat slice of the “defence” budget earmarked for intelligence and cybersecurity. Meanwhile Iain Duncan-Smith of the Inter-Parliamentary Alliance on China is angling for chair of the foreign affairs select committee.

However, despite her success in the leadership contest, the “ideology first” v “trade first” factions in the Tory Party will continue to battle it out. As the economy tips into recession, questions will surely be raised from the business community as to the wisdom of jeopardising economic ties with the world’s second largest economy.

At least 150,000 jobs across Britain are attributable to economic links with China, and those workers are starting to have their say too.

The ongoing shenanigans around the semiconductor firm, Newport Wafer Fab, is a test case of the decoupling drive with the 2021 takeover by a Chinese-backed business now under retrospective review on so-called “national security grounds.”

With nearly 600 jobs at risk, employees have come out overwhelming in favour of Chinese ownership, which they say has “provided stability, improved job security, wages and working conditions.” They oppose a return to the previous owner under whose mismanagement the company became a loss-making business.

Truss’s plan is of course “to grow the economy.” Besides the delusional economics of tax cuts, she looks to launch a “new Commonwealth deal” strengthening economic ties across one of the largest groups of freedom-loving democracies. Her aim is to squeeze the growing influence of China’s Belt and Road Initiative.

Now many Commonwealth countries are low-income economies and most have actually joined the BRI. If Britain can negotiate some win-win deals with them so much the better — but why should they choose to sacrifice economic relations with China if these have been working for them?

Such a reorientation of Britain in the world economy would at any rate take years of diplomatic effort even if it was sufficient to fill the gap left by an economic rupture with China.

In support of Biden’s democracies versus autocracies agenda, Truss for sure will tilt further towards the Indo-Pacific, supporting the expansion of Aukus, stoking regional tensions further.

She also aims to push Japan into an even more hawkish direction, resolving to “tackle the strategic threat posed by China together,” this regardless that its elites have never fully faced up to their ultranationalist and colonial militarist past. Japan is now strengthening links with Nato and has committed to a massive armaments programme, forecast to make it the world’s third largest military power.

Nato, that armed guard of the G7’s “rules-based order,” currently uses the “China threat” to prolong the war in Ukraine — our Defence Secretary, Ben Wallace, refusing compromise since “China is watching.”

When Johnson first launched Global Britain, it should be recalled, John Major, the former Tory prime minister, pointed out that Britain was no longer a “great power.” His warning that “complacency” and “nostalgia” are the routes to a national decline applies all the more to Truss as she hunkers down for a “battle of civilisations” with her particularly dangerous mixture of chauvinism and naivety.

A deep hostility towards China has been allowed to build up, weighing more and more heavily on Chinese people in Britain as they face discriminatory targeting.

A tidal wave of negative headlines about all things Chinese serves to obscure the fallacy of British democracy itself and its waning credibility, particularly in the global South.

US-China relations are at a point of crisis. Biden is stepping up arms sales to Taiwan and, in notable contrast to the Ukraine crisis where he explicitly rules out direct engagement, he has made repeated promises that the US will come to the island’s defence.

The US-China agreements that have framed the stability of the Pacific for four decades, after years of imperialist wars on China, Korea, Vietnam and Indochina, are being trampled underfoot. Meanwhile Truss is on record as calling for Nato to also commit to the “defence” of Taiwan.

Her delusions about Global Britain could walk us into deep trouble. The more pressure from below that can be brought to bear to force Truss to focus on domestic issues the better — it will mean less time and money for extending Global Britain’s military reach.

Her fantasy foreign policy along with her fantasy economics may seem likely to flounder when faced with objective realities but the determination of those transatlanticists backing Truss to once again frame China as “the aggressor,” as in the Korean war, should not be underestimated.

No way should we allow these extreme reactionaries to march us into a US-led war with China, a war bringing two nuclear-armed states into face-to-face combat.

5 thoughts on “Truss and China: opening a new war front?”