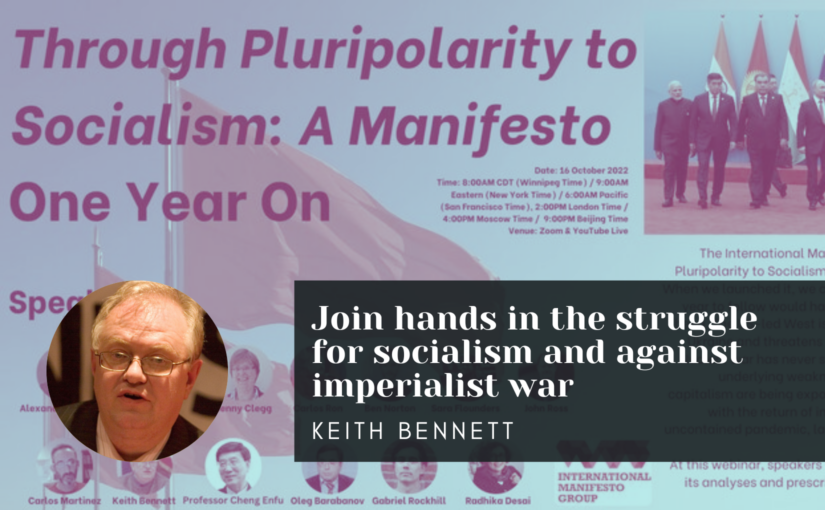 At the recent webinar marking the first anniversary of the International Manifesto Group’s document ‘Through Pluripolarity to Socialism’, Friends of Socialist China co-editor Keith Bennett made a speech assessing geopolitical developments since the launch of the manifesto. Keith observes that imperialism’s hasty retreat from Afghanistan has flowed into escalating aggression against both Russia and China, noting that both “NATO’s proxy war against Russia, which it seems determined to fight to the last Ukrainian” and the new Cold War against China have only intensified under the Biden administration.

Keith further states that the international left – albeit in a partial and contradictory way – is embarked on a process of realignment that has significant parallels to the realignment that took place a century ago, when the lines were drawn between those willing to fight against imperialism and those choosing the path of class collaboration. The questions our movement is asking itself are: “Whether to oppose imperialist war wherever it is waged; whether to support all those who fight imperialism, no matter the banner under which that struggle is waged; and whether to give resolute, wholehearted and unqualified support to any and every country, no matter where and no matter how, where our class, the working class, takes power, and sets out on the long and difficult road of building a new society, a socialist society.”

The late British Prime Minister Harold Wilson reputedly said that a week is a long time in politics. Certainly that might seem to be the case for former UK Chancellor Kwesi Kwarteng. The one who turned up in Washington for the annual meeting of the IMF, declaring he wasn’t going anywhere, only to have to leave early to return home for the dubious pleasure of being sacked.

But if a week is a long time in politics, it’s already one year since we launched our Manifesto, Through Pluripolarity to Socialism. Of course, in the broad sweep of human history, a year is far less than a blink of an eye. But perhaps we should reflect more on Lenin’s famous observation that there are periods of years when nothing seems to happen and then there come days into which years are compressed. We seem to be headed more in that direction.

Two things occupied particular attention when we were drafting the Manifesto. One was the global Covid-19 pandemic, the variegated response to it, the contradictions that it had bought to the surface and exacerbated, and the social, economic and political crises it had triggered. The other was the chaotic US, British and NATO withdrawal from Afghanistan and the ignominious collapse of the puppet regime they had sought to leave behind.

We noted that the response to Covid-19 on the part of the socialist countries had been exemplary. And that has continued to be the case, whether in China, Vietnam, Laos, Cuba, or the Democratic People’s Republic of Korea, despite the fact that the last two named countries have laboured for decades under crippling and asphyxiating sanctions and blockades. China, Vietnam and Cuba have not only carried out exemplary policies at home. They have been providers of much-needed aid, primarily to developing countries, but also to developed countries, in the finest traditions of working-class international solidarity. By being the very first country to introduce lockdown measures, the Democratic People’s Republic of Korea registered not a single case of Covid for over two years, and then, thanks to a huge nationwide mobilization, rapidly suppressed the virus when it finally entered the country. As the Manifesto stated:

“No wonder, the ruling Communist Party of China celebrated a proud centenary in July 2021.”

As we meet today, the 20th National Congress of the Communist Party of China has opened in Beijing. It will not only set the scene for the next five years of China’s socialist development, but also map out more generically the route from the achievement of a moderately prosperous society and the complete elimination of extreme poverty, achieved just before the first centenary, that of the party, to the realisation of a modern, powerful and prosperous socialist country in all respects by the time the nation marks its second great centenary, that of the founding of the People’s Republic in 2049.

What an inspiring vision. And what a contrast to the increasingly obvious dysfunctionality of the main bourgeois parties in the major capitalist countries, be it the United States, Britain, France, Italy or wherever.

China’s dynamic zero Covid policies have literally saved millions of lives. Yet the more lives they have saved, the more hysterically they are denounced in the imperialist world, by politicians, the media and ‘talking heads’ alike. Government ministers in Britain (or at least people who were government ministers the last time one looked; it really is becoming hard to keep up) constantly tell us that Covid is over. As supposed proof, one reason cited is that Britain is the only European country with no Covid-related restrictions left in place. Such a great achievement! But rather than constituting a victory over Covid, it simply gives us the dubious honour of having, in Engels’ entirely apt description, the most socially murderous government in our continent. Two days ago, the Office of National Statistics estimated that one in 37 people in the UK currently has Covid, a rise from one in 50 a week before. It further highlighted the danger of a Covid and flu ‘twindemic’ this coming winter.

Turning to the imperialist retreat from Afghanistan, a process that unfolded with extraordinary rapidity as we were finalizing our draft, the chaotic and at times pitiful scenes that unfolded at Kabul, particularly around the airport and the road leading to it from the city, reminded one of nothing so much as events on a day that some of us are old enough to remember, a day in spring 1975 when the helicopters fleeing from the roof of the US Embassy marked the moment when Saigon became Ho Chi Minh City.

But whilst the return of the Taliban undoubtedly marked a defeat for US imperialism, it did not represent a victory for progressive humanity in the way that the victory of the Vietnamese communists, supported by the Soviet Union, China, and the entire socialist camp, did.

What the defeat in Afghanistan means for the global struggle against imperialism, and the world balance of forces, is naturally a topic for study and debate. Certainly, as with Iraq, only more dramatically, it shows that, despite decades of effort, heartless brutality and trillions of dollars, US-led imperialism is not capable of solving a single problem. Cannot achieve any sustainable victory. Cannot subdue a people who rise in resistance, even if they are mobilized around an anachronistic ideology, are equipped with simple weapons, and lack significant external support. This is a stark and demonstrable fact that should be noted by people in any and every country suffering under the heel of imperialism.

At the same time, I would argue that those comrades who argued that a prime purpose of imperialism’s hasty retreat was to position itself more strategically vis-à-vis its two principal adversaries, China and Russia, appear to have been largely vindicated.

NATO’s proxy war against Russia, which it seems determined to fight to the last Ukrainian, combined with the new Cold War against China, which has only intensified under the Biden administration, whether viewed from the perspective of Pelosi’s visit to Taiwan in early August or this last week’s new national security strategy, means that the danger of nuclear war has never been greater. This is something that should vitally concern every human being on earth. Our Manifesto noted:

“Rosa Luxemburg famously feared that the alternative to socialism was barbarism. Today, however, it is human and planetary annihilation.”

This is true whether we look it at from the perspective of the threat of nuclear war; zoonotic pandemics, of which Covid-19 is certainly not the last; or the looming climate catastrophe. The existential threats staring humanity in the face require socialist solutions.

This is the context in which we have developed and are conducting our work. I believe we have a unique role to play as a global network of socialist and Marxist scholars and activists, from different traditions and backgrounds, but who have arrived at a common, but not identical position on the need to stand firmly on the soil of anti-imperialism and to recognise the indispensable and leading role of the socialist countries.

Periods of great crises lead to profound political realignments. Nothing illustrates this more starkly than the road from the outbreak of war in Europe in the summer of 1914 through the October Revolution to the founding of the Communist International. Today, the international left, in an inevitably confused, contradictory and partial way, is embarked on a realignment and recomposition no less fundamental than that of our forebears a little over a century ago. And the same inter-related questions are at its heart: Whether to oppose imperialist war wherever it is waged; whether to support all those who fight imperialism, no matter the banner under which that struggle is waged; and whether to give resolute, wholehearted and unqualified support to any and every country, no matter where and no matter how, where our class, the working class, takes power, and sets out on the long and difficult road of building a new society, a socialist society.

Let us all echo the title of the great Paul Robeson’s autobiography: Here I Stand.