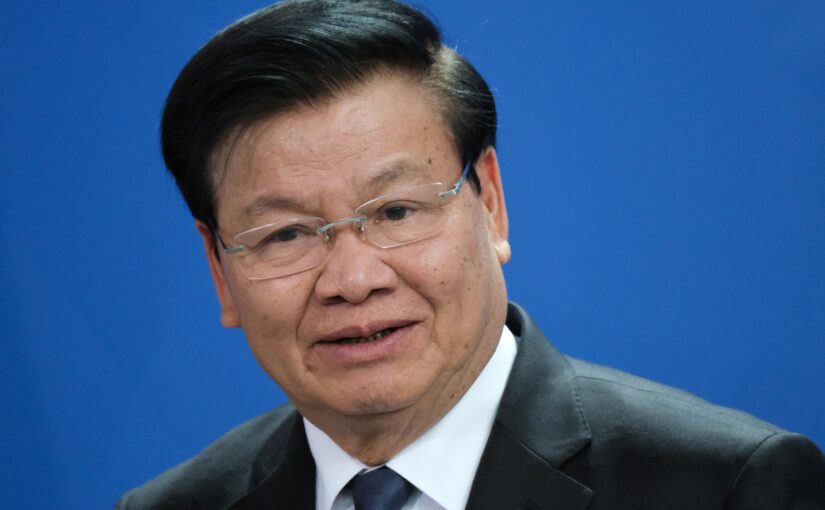 Comrade Thongloun Sisoulith, General Secretary of the Lao People’s Revolutionary Party (LPRP) and President of the Lao People’s Democratic Republic (LPDR), is currently on a visit to China at the invitation of his Chinese counterpart Xi Jinping, becoming the third leader of a socialist country to visit Beijing, following the visits of the Vietnamese and Cuban leaders, since the Communist Party of China held its 20th National Congress in October.

This is Thongloun’s first visit to China after taking office as General Secretary in January in 2021 and becoming state President of March the same year. However, he has previously visited China many times, the first occasion being in 1970, five years before his country’s liberation, testifying to the long and intimate ties between the Chinese and Laotian revolutions.

The following article, reprinted from Global Times, outlines the background and context to his current visit.

The top leader of Laos is paying a visit to China from Tuesday to Thursday in a trip that is believed to highlight the positive interactions between the two socialist countries, enhance their political trust and bring new economic opportunities to both sides.

This is Thongloun’s first visit to China after taking office as general secretary of the Lao People’s Revolutionary Party Central Committee in January in 2021, and assuming office as president of Laos in March the same year.

As close neighbors and socialist countries, China and Laos have constantly deepened their trade and economic ties in recent years. According to the Xinhua News Agency, China has become the second-largest trading partner and the country with the largest foreign direct investment in Laos.

Thongloun has visited China many times since he first visited Nanning, South China’s Guangxi Zhuang Autonomous Region, in 1970. “Laos and China have helped each other in various periods of history, and in modern times they supported each other when fighting against foreign aggression. In particular, the Communist Party of China, the army and the people of China have provided timely and effective assistance to the cause of national salvation of Laos without any strings attached,” Thongloun described China-Laos relations in a previous interview with China Central Television (CCTV) News.

Experts believed Thongloun’s visit at this time is significant as the visit highlights the unique inter-party relations and positive interactions between the two socialist countries.

Socialist countries have much in common in governing the country and safeguarding the socialist system. It is expected that the two parties will exchange and learn from each other on the governance and promoting development, especially after the 20th National Congress of the Communist Party of China successfully concluded in October and Chinese modernization highlighted at the key CPC meeting will bring fresh opportunities to its neighbors and other countries around the world, Xu Liping, director of the Center for Southeast Asian Studies at the Chinese Academy of Social Sciences, told the Global Times on Tuesday.

The cooperation between China and Laos provides a good example for other Southeast Asian countries to better gather the sense of a community of shared future through concrete action and practical plan which will also take root in other neighboring countries, Ge Hongliang, director of the China-ASEAN Maritime Security Research Center at Guangxi University for Nationalities, told the Global Times on Tuesday.

China and Laos agreed to build a community of shared future with strategic importance during President Xi’s state visit to the Southeast Asian country back in 2017. The two countries signed an action plan to build the China-Laos community with a shared future in 2019. In recent years, the two countries have accelerated the alignment of their development strategies and advance the construction of the China-Laos Economic Corridor.

Among all the issues that will be discussed during Thongloun’s visit, the most important thing that people are concerned about might be the regional cooperation plan after the opening of the China-Laos Railway, experts noted. December 3 will mark the one-year anniversary of the opening of the China-Laos Railway. The 1,035-kilometer rail line that runs from Kunming, Southwest China’s Yunnan Province, to Vientiane, the capital of Laos, is the largest project in Laos completed under the framework of the Belt and Road Initiative (BRI).

According to China Railway’s Kunming bureau, the total quantity of freight transported by the China-Laos Railway had exceeded 10 million tons as of November 7. Among the total, the cross-border cargo transportation volume topped 1.8 million tons, with its value hitting 12 billion yuan ($1.7 billion).

The China-Laos Railway, a landmark project, forges greater synergy between China’s BRI with the strategy of Laos to transform itself from a land-locked to a land-linked country, Lao Ambassador to China Khamphao Ernthavanh said to the Global Times in an earlier exclusive interview.

For Laos, the BRI proposed by China is not only about infrastructure construction, but also about providing more opportunities and development space for some industries in urgent need of development in Laos, especially small- and medium-sized enterprises and agricultural companies, Ge pointed out. Therefore, with the help of regional cooperation, especially under the Regional Comprehensive Economic Partnership (RCEP) framework, Laos has achieved a lot of development opportunities.

“The railway helped Laos, a landlocked country with no access to the sea, to have a logistics network to the sea and easily reach other countries in the region for both passenger and freight transportation,” Thongloun told CCTV News. “It has encouraged more investors and tourists to invest and travel to Laos from all aspects,” he said.

Laos has a strong need for development, Xu pointed out. It is foreseeable that after this visit, China can further promote the development of Laos through the alignment of its development strategy and bring new economic opportunities to both the Chinese and Lao people, Xu said.