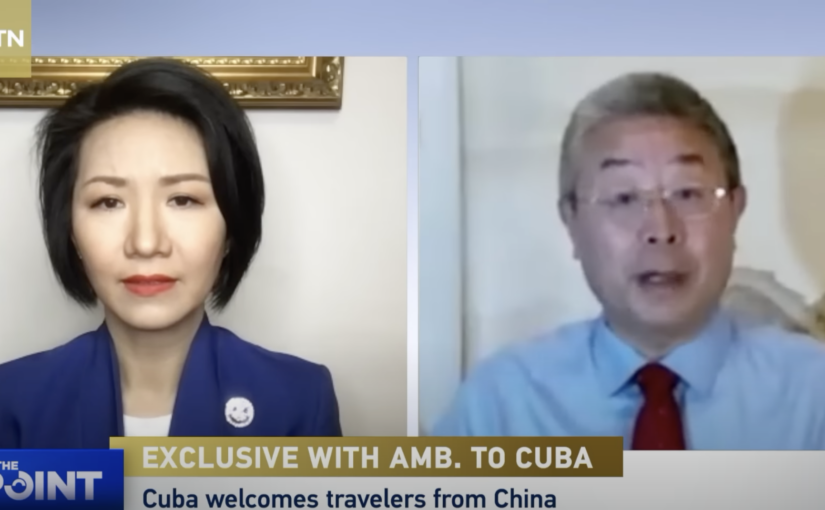 In an interview with CGTN’s Liu Xin, China’s Ambassador to Cuba Ma Hui outlines the Caribbean country’s approach to tackling Covid-19 and highlights the cooperation between the two socialist countries. He further criticises the US embargo and contrasts his experience as Ambassador in Havana with that in his previous position as Minister in the Chinese Embassy in London, both in the ‘time of Covid’.

Unlike the discriminatory approach adopted by the US, UK and some other countries, Cuba has welcomed China’s adjustment of its Covid policies and the country stresses that it always welcomes Chinese visitors. Ambassador Ma praises Cuba for managing to contain Covid despite suffering from a decades-long US embargo. Cuba, he notes, has one of the highest rates of administering vaccine boosters, using domestically researched and produced vaccines. There are currently only a few positive Covid test cases per day, with no deaths reported in the last five months. Cuba developed its own vaccines against all the odds – the only Latin American country to do so. The country is quite developed in terms of biotechnology.

China and Cuba always support each other, Ambassador Ma explained, including in fighting the virus. At the onset of Covid-19, Cuba offered material help to China despite its own difficulties and later China reciprocated, supplying ventilators, oxygen generators, medicines and personal protective equipment (PPE) on several occasions.

Cuba’s achievements are all the more impressive in that they have been won whilst fighting under a US embargo that has imposed huge suffering. Indeed, the Cuban people describe the embargo as another lethal virus. Cuba has not only put up a brave fight at home but has also helped others. Both China and Cuba have a tradition of sending medical teams to developing, and even on occasion developed, countries, and through their heroic efforts, the Cuban people sent doctors to some 30 or 40 countries to help them fight the pandemic.

Comparing his Cuban experience to his time in London, Ma Hui said that for the mainstream media and some politicians, China is a victim of “damned if you do, damned if you don’t”. When it came to Covid, the UK failed miserably but lectures others. However, solidarity and cooperation are the only way out as the virus is a common challenge to all humanity.

Liu Xin’s interview with Ma Hui is embedded below.