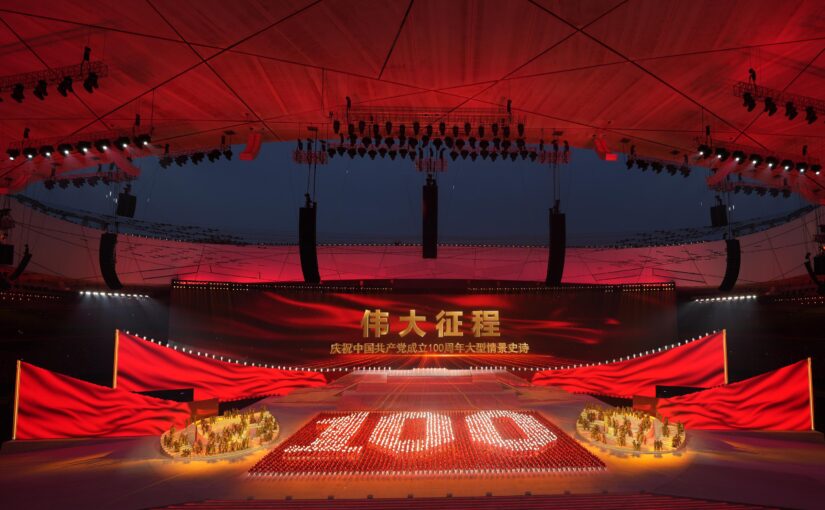 The theme of the event was the Preservation and Innovation of Marxism in the 21st Century, with a key focus on:

The Forum heard a total of 23 presentations, including 13 from leading Chinese Marxist thinkers and theoreticians as well as from the Cuban Ambassador to China; Egon Krenz, former leader of the German Democratic Republic (GDR); two speakers from Russia, including the Vice Chair of the Communist Party of the Russian Federation (CPRF); Keith Bennett, Co-Editor of Friends of Socialist China; and speakers from Argentina, Italy, Cameroon, Venezuela and Vietnam.

We print below Keith Bennett’s speech to the Forum.

On behalf of Friends of Socialist China, a platform established earlier this year to support the People’s Republic of China and spread understanding of Chinese socialism on the basis of Marxism, I’d like to extend our thanks to the World Socialism Forum for inviting us to attend this important meeting and to submit a paper. We also extend warm greetings to everyone participating and hope that we can find concrete ways of working together in the future.

The People’s Republic of China has emerged as the indispensable nation in the contemporary struggle for socialism and human progress.

As the International Manifesto Group, a global body of scholars and activists from diverse Marxist traditions, in which we participate, put it in their Manifesto, Through Pluripolarity to Socialism, launched this September:

Indeed, in 2021, no country represents working people’s advance – economic, technological, ecological and social – more than China, though the achievements of other socialist countries like Cuba also rank high. To its already impressive record – the greatest political and industrial revolutions, the thorough eradication of feudalism, the end of extreme poverty, major contributions to resolving the ecological emergency including in renewable energy, afforestation and nuclear fusion – China now added vindication against the novel coronavirus and international leadership in the fight against it.

No wonder, the ruling Communist Party of China celebrated a proud centenary in July 2021. The party had made China the indispensable nation in humankind’s struggle for socialism, offering aid and inspiration as a worthy example of a country pursuing socialism in accordance with its national conditions.

Our own founding Mission Statement points out:

We support all states building or aspiring to socialism, and we favour the highest level of unity and friendship between them. We foreground China, in particular, because its size and level of development give it an objectively critical role in the global transition to socialism. China is the most prominent force pushing for the establishment of a multipolar system of international relations and a new international economic order; meanwhile, it is emerging as the global leader in the struggle to avoid climate breakdown. As such, the continued survival of Chinese socialism is a crucial matter not only for the Chinese people but for all humanity.

This year has been an extraordinary one for the CPC. The year of its centenary. I tried to capture a very small part of the significance of this anniversary in a review I wrote of the feature film 1921:

It needs to be widely viewed, whether in China or around the world: for young Chinese people so that they might better know the struggles and sacrifices of their forebears that have made possible today’s increasingly strong and prosperous socialist China; and for those of us in the non-socialist world, who may sometimes feel daunted by the enormity of attempting to transcend the outmoded system of capitalism, to be reminded that a better world is indeed possible and that even a small number of people, with no resources to speak of, can really help to make it happen, so long as they have the spirit, in Marx’s words, to ‘storm heaven’.”

Only the third such resolution in 100 years, it is a masterly exposition and summary of, and comprehensive victory for, Xi Jinping Thought on Socialism with Chinese Characteristics for a New Era. As the Resolution makes clear, this Thought is “the Marxism of contemporary China and of the 21st century”. As such, the victory of Xi Jinping Thought is inseparably connected to the vitality and progress of Marxism throughout the world. In the apt words of the Resolution:

The Party’s endeavours over the past century have demonstrated the strong vitality of Marxism.

Marxism has brought to light the laws governing the development of human society. It is a scientific truth for understanding and shaping the world. But to uphold and develop Marxism, Marxists from all over the world must engage in extremely strenuous and challenging work, both in theory and in practice. Over the past century, the Party has rallied under the banner of Marxism, continued to adapt Marxism to the Chinese context and the needs of our times, embraced all the outstanding achievements of human society with a broad-minded perspective, and used the sound theories derived from adapting Marxism to the Chinese context to guide its great endeavours.

In China, Marxism has been fully tested as a scientific truth, its people-centered and practical nature has been brought into full play, and its open-ended nature and contemporary relevance have been fully demonstrated. Our continued success in adapting Marxism to the Chinese context and the needs of our times has enabled Marxism to take on a fresh face in the eyes of the world, and significantly shifted the worldwide historical evolution of and contest between the two different ideologies and social systems of socialism and capitalism in a way that favours socialism.

I believe that we meet today against this background and in this spirit. As has often been said, Marxism is not a dogma, but a guide to action. It is a living, developing, creative, dialectical and adaptive science that thrives and matures on the basis of exploration and innovation.

Again, as the Resolution notes:

As Comrade Xi Jinping pointed out, the great social transformations that contemporary China has undergone are not a natural continuation of our country’s historical and cultural traditions, not a mechanical application of the templates designed by authors of Marxist classics, nor a copy of the socialist practice in other countries or foreign models of modernisation. As long as we have the courage to keep making theoretical innovations in light of new practical developments and use new theory to guide new practice, we are certain to see Marxism emanate mightier and more compelling power of truth across the land of China.

And in words that echo VI Lenin’s famous formulation regarding the attitude of a proletarian party to its mistakes, it adds:

The secret to this lies in the Party’s commitment to upholding truth and righting errors. The Party is great not because it never makes mistakes, but because it always owns up to its errors, actively engages in criticism and self-criticism, and has the courage to confront problems and reform itself.

All this makes me recall discussions I held when I was first a guest of the International Department of the Central Committee of the Communist Party of China in Beijing in May 1981. I can almost recall the exact words of the comrade:

‘We deeply feel that the question of how to make a revolution in the countries of Western Europe remains an unanswered one.’

I have often reflected on this, and the more time passes, and the older I get, the more I appreciate its wisdom and veracity.

The Communist and Marxist Parties, and all adherents of Marxism, in Western Europe, and elsewhere in the developed capitalist world, therefore also need to pursue exploration and innovation. And they must do so whilst holding fast to the basic principles of Marxism, seeking to defend and advance the immediate needs and interests of the working people, as well as fulfilling their internationalist duties, not least to support and defend China and all the other socialist and anti-imperialist independent countries in the face of the New Cold War and the unchanging aggressive nature of imperialism.

The history of the communist and working class movement in Western Europe does provide many fine examples of such exploration and innovation.

Antonio Gramsci in Italy, James Connolly in Ireland, John Maclean in Scotland and Rosa Luxemburg and Karl Liebknecht in Germany are all examples of those who have made outstanding achievements in the application and development of Marxism to and in their time and place and in so doing have made an important and lasting contribution to the development of Marxism as a whole.

In particular, through their elucidation of the relationship between independence and socialism, between the national and the class questions, James Connolly and John Maclean clearly presage and prefigure the immense contributions of such great leaders as Mao Zedong, Zhou Enlai, Ho Chi Minh and Kim Il Sung in further adapting and developing Marxism-Leninism, not simply as the ideology of the Western proletariat, but, in both theory and reality, as the revolutionary science of liberation for the working and oppressed people of the whole world.

It is on such legacies that we have to build. In so doing, the following words of VI Lenin should serve to remind us of his prescience in identifying the diversity of socialist experience, the forms and pace of transition and hence the need for constant exploration, innovation, development and adaptation to national conditions and changed circumstances in the theory and practice of Marxism:

Even the trusts and banks of modern imperialism, though inevitable everywhere as part of developed capitalism, differ in their concrete aspects from country to country. There is a still greater difference, despite homogeneity in essentials, between political forms in the advanced imperialist countries—America, England, France, Germany. The same variety will manifest itself also in the path mankind will follow from the imperialism of today to the socialist revolution of tomorrow. All nations will arrive at socialism—this is inevitable, but all will do so in not exactly the same way, each will contribute something of its own to some form of  democracy, to some variety of the dictatorship of the proletariat, to the varying rate of socialist transformations in the different aspects of social life. There is nothing more primitive from the viewpoint of theory, or more ridiculous from that of practice, than to paint, ‘in the name of historical materialism’, this aspect of the future in a monotonous grey.

A Caricature of Marxism and Imperialist Economism, Collected Works Volume 23

Thank you once again to the World Socialism Forum and our friends at the Chinese Academy of Social Sciences for making this valuable exchange of ideas and experiences possible. We look forward to many more such opportunities in the future.