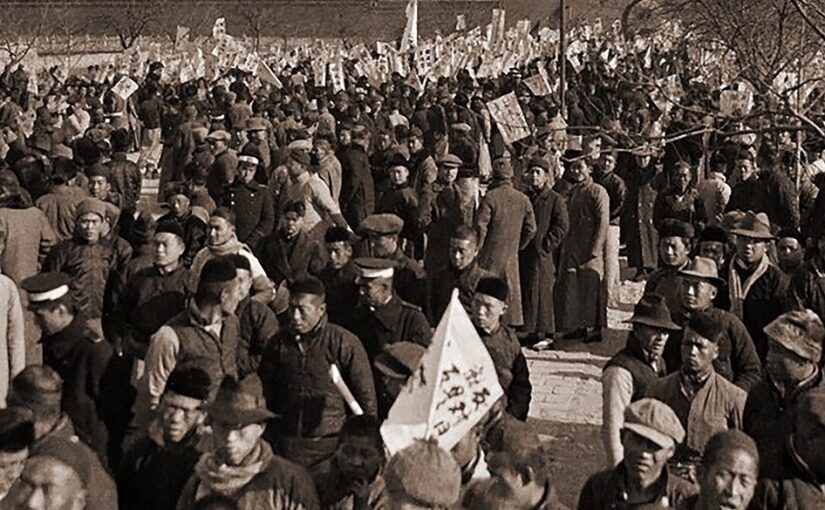 We are republishing this article by Friends of Socialist China co-editor Carlos Martinez, which originally appeared in the Morning Star on 4 June 2021. It is the first in a series of articles about the history of the Communist Party of China, which celebrates its centenary on 1 July 2021.

The Communist Party of China (CPC) was formed in July 1921. From that time up to the present day, it has led the Chinese Revolution – a revolution to eliminate feudalism, to regain China’s national sovereignty, to end foreign domination of China, to build socialism, to create a better life for the Chinese people, and to contribute to a peaceful and prosperous future for humanity.

Feudalism was dismantled in CPC-controlled territories from the early 1930s onwards, and throughout the country in the period immediately following the establishment of the People’s Republic in 1949.

Similarly, warlord rule was ended and a unified China essentially established in 1949; Hong Kong was returned to Chinese rule in 1997 and Macao in 1999. Only Taiwan continues to be governed separately and to serve foreign interests.

And yet in a world system still principally defined by US hegemony, the imperialist threat remains – and is intensifying with the development of a US-led hybrid war against China. Therefore the project of protecting China’s sovereignty and resisting imperialism continues. Similarly, the path to socialism is constantly evolving.

In the course of trying to build socialism in a vast semi-colonial, semi-feudal country, mistakes have certainly been made.

The collected works of Marx and Lenin bubble over with profound ideas, but they contain no templates or formulae. Chinese Marxists have had to continuously engage in “concrete analysis of concrete conditions,” applying and developing socialist theory, creatively adapting it to an ever-changing material reality.

This series will focus in on a number of controversies in Chinese revolutionary history, in particular the New Democracy period, the Great Leap Forward, the Cultural Revolution and the Reform and Opening Up process. I argue that, while the Chinese Revolution has taken numerous twists and turns, and while the CPC leadership has adopted vastly contrasting strategies at different times, there is a common thread running through modern Chinese history: dedication to navigating a path to socialism, development and independence, improving the lot of the Chinese people, and contributing to a peaceful and prosperous future for humanity.

In order to lay the ground for the rest of the series, this first article will give a very brief overview of the early history of the Chinese Revolution.

The CPC was formed in response to a clear need for revolutionary leadership. The 1911 bourgeois revolution that had finally overthrown the Qing dynasty and established the Republic of China had come to a dead end, owing to the manoeuvring of the imperialist powers and their comprador agents. Most of the country was run by warlords.

The feudal economy remained in place and the bulk of the population remained permanently on the brink of starvation, indebted to landlords. The various imperialist powers maintained their footholds, with Britain, the US, Japan and Germany competing for control of China’s land and resources.

Young people in particular were searching for a path forward. A turning point came on May 4 1919, when the students of Beijing marched on the government buildings in protest at the Treaty of Versailles, which legalised the Japanese seizure of Shandong province and rejected China’s demands for the abolition of foreign spheres of influence and the withdrawal of foreign troops.

The CPC, formed two years later, was the first organisation to put forward the slogan “Down with imperialism,” recognising that China’s weakness and backwardness were inherently bound up with foreign domination.

Some relatively forward-thinking elements of the emerging capitalist class had hoped that the US or Japan might help China to establish itself as a modern capitalist power, but the communists recognised that this reflected a fundamental misunderstanding of the nature of imperialism. The major capitalist powers were compelled by the nature of their economic system to compete for control of China – a country offering an abundance of land, people, natural resources and geostrategic advantage.

The CPC’s anti-imperialist position quickly won it the support of a significant section of the population.

Soon after its formation, the CPC pushed for a united front with the Guomindang (GMD), a revolutionary nationalist party set up by Sun Yat-sen in 1912. The idea of the united front was to construct an anti-imperialist alliance incorporating workers, peasants, intellectuals and the patriotic elements of the capitalist class, with a view to decisively ending feudalism, uniting the country under a single central government and driving out the imperialist powers.

Denied recognition or support by the West, the GMD was in the process of orienting towards the recently formed Soviet Union, which had already demonstrated itself to be a supporter of Chinese sovereignty.

This first united front started to fracture after the death in 1925 of Sun Yat-sen. The GMD’s right wing gained the ascendancy under the leadership of the fiercely anti-communist Chiang Kai-shek. Fearing that the communists were gaining too much popular support, Chiang orchestrated a coup against them, in collaboration with the various foreign powers that had recognised in Chiang a potential partner in the pursuit of an “acceptable” political conjuncture in China.

When, in April 1927, Shanghai was liberated from warlord control as the result of an insurrection of the local working class (led primarily by CPC forces), Chiang’s forces won control of the city by means of a massacre of its liberators, killing an estimated 5,000 people. This marked the start of a several-year campaign of mass killings by Chiang’s forces against communists and progressive workers.

With CPC members formally ejected from the GMD and the united front dismantled, Chiang Kai-shek set up a new regime in Nanjing, under which communism became a crime punishable by death. The government focused its efforts not on resisting imperialism or uniting the country but on suppressing communists.

These disastrous events led the communists to a strategic reorientation. It was clear that a united front policy focused on the major urban centres was no longer a viable option. Meanwhile, “as every schoolboy knows, 80 per cent of China’s population are peasants” (Mao Zedong, On Contradiction). The CPC was moving towards the development of the world’s first rural-based revolutionary Marxist movement.

Following a failed uprising in his native Hunan, Mao Zedong fled with his forces into the Jinggang mountains, in the border region of Jiangxi and Hunan provinces. This became the birthplace of the Chinese Red Army and the site of the first liberated territory.

The Jiangxi Soviet expanded over the course of several years to incorporate parts of seven counties and a population of more than half a million.

Between 1929 and 1934, Chiang’s forces led a series of brutal encirclement campaigns in an attempt to bury the Jiangxi Soviet. After suffering a series of defeats at the hands of a highly motivated and skilled Red Army, the Guomindang mobilised warlord armies from around the country, organising a force of more than a million troops. The communists had no choice but to abandon the liberated territory and break the siege. This process became the Long March: the extraordinary year-long retreat to the north-west, covering over 9,000 kilometres and ending with the establishment of a revolutionary base area in Shaanxi.

In the liberated territories, the communists led the creation of a new political economy in the countryside that – along with their determined struggle against Japanese militarism – would earn them the support of the broad masses of the peasantry.

Land reform was carried out and basic educational and healthcare infrastructure established. Millions of peasants finally learned to read in schools set up by the Red Army.

In the context of an expanding Japanese occupation of north-east China, more progressive elements within the GMD took the initiative, detaining Chiang in the north-western city of Xi’an and forcing him to agree to co-operate with the CPC against Japanese occupation. Thus was formed the Second United Front. The red base at Yan’an was recognised as a provincial government and the CPC was legalised; the Red Army was re-designated as the Eighth Route Army.

By the time of Japan’s defeat in 1945, it was abundantly clear that the communists were the most cohesive, committed and competent political force in China; the only political party with the potential to restore China’s sovereignty, unity and dignity.

The CPC proposed a democratic coalition with the GMD, and this was agreed; however, Chiang Kai-shek could accept nothing less than full control of the country, and he persisted in ferocious military attacks against CPC-controlled territory. A bitter four-year civil war ensued, resulting in the communists’ victory and the flight of Chiang Kai-shek and his generals to Taiwan.

The People’s Republic of China was proclaimed on October 1 1949 by Mao Zedong, who announced to the hundreds of thousands present in Tiananmen Square that “the Chinese people have stood up!”