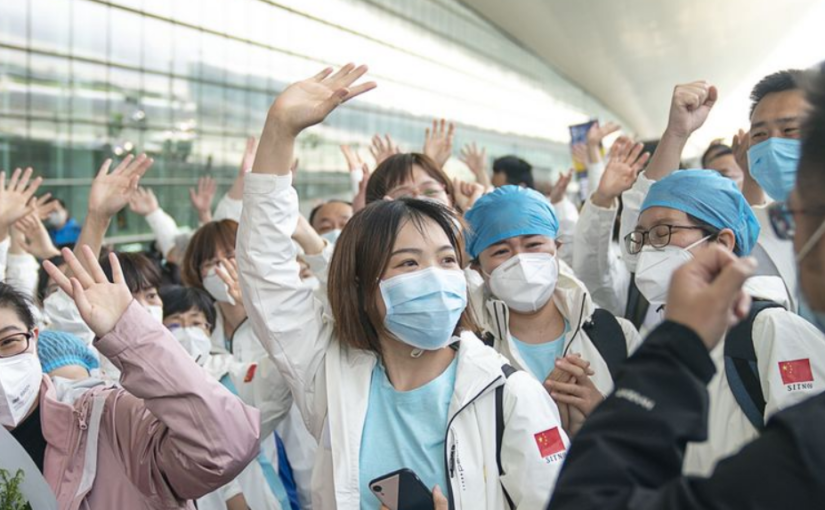 The following comment on the contrasting approaches of capitalism and socialism to Covid-19 by Friends of Socialist China co-editor Keith Bennett was originally published in abbreviated form by China Youth Daily.

Ever since the Covid-19 virus was first detected in Wuhan there have been consistent attempts to politicise the issue by certain Western powers and political forces in the West on anti-China, anti-communist and racist bases.

Decent people and the overwhelming majority of countries in the world felt sympathy and solidarity with China and with the Chinese people as they courageously battled a then unknown virus and dealt with the situation in an exemplary way that put human life first and also assumed a model attitude of international responsibility, identifying the coronavirus and sequencing its genome in record time and immediately sharing this with the entire international community, not only through the recognised international channels, but even by publishing it on the internet, thereby making it freely available to all scientists and researchers.

But there was also a counter current. Human Rights Watch, which seems more focused on political denigration of socialist and developing countries than on any genuine concern for human rights, attacked the prompt and effective measures taken in Wuhan to suppress the virus and save lives as being somehow incompatible with ‘liberal democracy’. A reluctance to lock down and to adopt a ‘zero Covid’ strategy on the part of many capitalist countries has deprived literally millions of people of the most basic of human rights, namely the right to life.

Others in the West speculated that the virus would be China’s, “Chernobyl moment” – that is, it would lead to the downfall of the People’s Republic and the socialist system. A senior official of the Trump administration openly gloated that the virus was a good thing. Apparently it would bring investment and jobs back from China to America.  However, China suppressed the virus with very little loss of life, and has continued to keep it under stringent and effective control, whilst the national economy has resumed healthy and robust growth. In stark and sad contrast, hundreds of thousands of Americans, the majority of them poor, working class and from oppressed minorities, have lost their lives, millions have lost their jobs and millions more will face losing their homes when the moratorium on evictions inevitably comes to an end. Life expectancy in the USA has seen its steepest decline since World War 2, with African Americans and Hispanic Americans particularly badly hit. Yet again, they “can’t breathe”.

This approach is the opposite of the scientific and people-first policy followed by China as well as by other socialist and socialist-oriented countries, such as the DPRK, Vietnam, Laos, Cuba, Venezuela and Nicaragua.  In China, the entire country rallied to the aid of Wuhan, which President Xi Jinping aptly called a “hero city”. People throughout the world watched with amazement as fully equipped, state of the art hospitals, with thousands of beds, were built literally from scratch and opened within days. Tens of thousands of doctors and other medical workers, with Communist Party members in the lead, volunteered to come to Wuhan from all parts of the country.  Many of them sacrificed their lives in the people’s war against the virus.  They proved by their deeds that this generation of Chinese communists, too, remain faithful to the original mission and aspiration, still maintain and carry forward the revolutionary spirit of fearing neither hardship nor death and surmounting every difficulty to win victory, of healing the wounded and rescuing the dying, and of devotedly and wholeheartedly serving the people.

While the virus was first identified in Wuhan, due not least to China’s excellent public health and anti-epidemic policies and practices, honed, for example, in the earlier successful struggle against SARS, an ever increasing number of reports, and a growing body of evidence, indicates that the virus was long circulating in numerous countries prior to its identification in China. It is therefore essential that investigation into the origin of the virus be conducted strictly in an objective, rational and scientific manner, free from political bias and interference and from racist prejudice. From the first day, China fully cooperated with the international community and with the WHO, in particular, at a time when the US had withdrawn from the organisation and sought by every means to undermine it and frustrate its work.  Whereas China welcomed the WHO investigation team, including to the Wuhan Institute of Virology, the United States continues to refuse access to the biological and bacteriological warfare facilities that it maintains not only at home, but also in countries throughout the world, including the notorious Fort Detrick base, which has been the site of repeated scandals ever since it was created on the basis of inheriting the work and personnel of the criminal Unit 731, used by the Japanese militarists to conduct vile ‘experiments’ and vivisection on live human beings when they occupied north-east China. In contrast, the Bloomberg news service, certainly no friend of China, reported the testimony from a New Zealand woman scientist who worked at the Wuhan Institute, which made clear that a leak from its labs was almost impossible, something that was also essentially confirmed by the WHO’s investigation team. To persist in levelling unsubstantiated and baseless accusations against China, and insolently making unilateral and arbitrary demands, while refusing access to your own dubious facilities, or an impartial investigation in all those places that have now identified likely instances of Covid prior to its identification in Wuhan, is nothing short of a new Cold War political provocation. It also begs the question – what do some people have to hide?

The stark contrast between the two systems and two approaches can also be seen when it comes to shouldering international responsibilities. China, Cuba, Vietnam, Russia and Venezuela have all set an example in extending a helping hand to others. In the early days of shortages, people in Britain, as in many other countries, gratefully received donations of face masks and other much-needed PPE from China as well as from Vietnam. China is now supplying huge quantities of vaccines to dozens of countries in the Global South, building a new ‘Health Silk Road’ and fulfilling President Xi Jinping’s solemn pledge to make the vaccine, once developed, a global public good, as part of his grand vision for a community of shared future for humanity. In the last few days, President Xi has pledged that China will provide two billion vaccine doses to the rest of the world in the course of this year and will also offer US$100 million to Covax, mainly to assist developing countries. Russia, too, has offered its Sputnik V vaccine to many countries. In contrast, the Western approach has been one of false promises and paltry results. With shocking cynicism, China’s and Russia’s generosity and responsibility is derided as “vaccine diplomacy”. One is tempted to say that the people of the world would probably prefer Chinese vaccine diplomacy to Western gunboat diplomacy! The Financial Times and other western media were at one time euphoric, claiming that, by supplying vaccines to countries like Mongolia, that neighbour China, India was apparently “beating China at its own game”. But China was never playing games, especially not at this moment of existential threat to humanity. Rather it was admirably fulfilling its basic humanitarian and internationalist duties. It was the western powers who were playing games and it was India and the Indian people who proved to be among their hapless victims. Reliable estimates of the numbers of people killed by Covid 19 in India in the most recent period range as high as 10 million – a damning and tragic indictment and one of the cruellest crimes against humanity recorded this century. Whilst accusing China and Russia of practising “vaccine diplomacy”, it is the imperialist countries that have actually been practising “vaccine apartheid”. Not only is this policy murderous and criminal, it is also foolish and shortsighted. This devilish coronavirus has proved, if nothing else, that no one is safe until everyone is safe. The western policy of vaccine apartheid is not only condemning millions to death in the poor countries – so long as the virus is not effectively suppressed on a worldwide scale, it will likely continue to constantly mutate, spawning new and ever more deadly and contagious variants, some of which will inevitably prove resistant or impervious to existing vaccines and which will surely find their way into countries around the world, no matter how well they have done with their vaccine programmes, just as we are presently seeing with the Delta variant.

It is now more than 100 years since the outstanding leader of the German and international working class movement Rosa Luxemburg popularised the warning originally sounded by Friedrich Engels – that humanity faced a choice of socialism or barbarism. Cuban revolutionary leader Fidel Castro formulated his people’s choice, not to say that of the wider human family, as socialism or death. Covid-19 and the struggle to suppress it has vindicated and illustrated these graphic and prophetic warnings in the most dramatic and starkest terms.