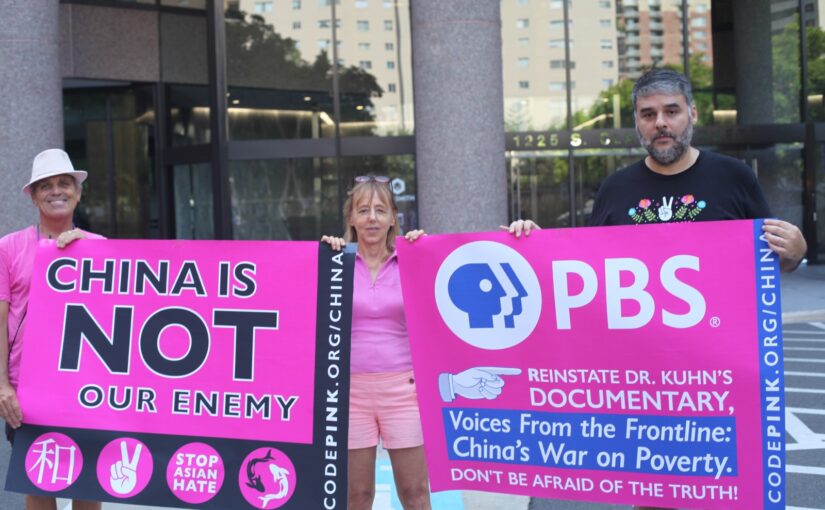 We are republishing this article from CODEPINK about their petition, with almost 4,000 signatures, demanding that PBS stop censoring the documentary ‘Voices from the Frontlines: China’s War on Poverty.’

Much to our disappointment, PBS, a PUBLIC broadcasting service, chose to call the police on these four peace activists members of the public, who were calmly and respectfully representing the opinions of the taxpayers — who fund PBS to the tune of over $26 million annually. The viewers who signed this petition are simply requesting that PBS honor its mission statement and values to “keep citizens informed on world events and cultures,” “express a diversity of perspectives,” and deliver content that is “responsive solely to the needs of the public—not to the interests of funders.”

CODEPINK’s letter, with nearly 4,000 signatures, calls on PBS to stop censoring Peter Getzels’ and Dr. Robert Lawrence Kuhn’s documentary film Voices from the Frontlines: China’s War on Poverty. The letter addresses how PBS is depriving its viewers of opportunities for learning about collective harmony and equality by censoring this documentary and its insight into China’s life-saving policies, which took 100 million citizens out of poverty, at a time when poverty, food insecurity, and houselessness are all at record levels in the United States.

The U.S.’s hybrid war on China involves much more than the dangerous U.S. military buildup to surround China in the South China Sea; it also involves economic, academic, and information warfare, including U.S. government-funded propaganda and harmful unilateral sanctions. At CODEPINK, we are firmly anti-war, and we fear that this bias and censorship from PBS is part of the U.S.-led hybrid war on China, especially considering that PBS’s Board of Directors includes Obama’s former Secretary of Defense Chuck Hagel. As Secretary of Defense, Hagel was described an asset for the administration’s “pivot’ to Asia” and “the face of the pivot.”

Given the lack of accountability and unwarranted police response from PBS, we are calling on members of the public to demand that PBS meet with CODEPINK to address their anti-China bias and censorship of Voices from the Frontlines: China’s War on Poverty. #PBSTelltheTruth! #ChinaIsNotOurEnemy!

👉Take action & call PBS to demand they meet with CODEPINK & reinstate the film!

One thought on “CODEPINK petitions PBS: Stop censoring the truth about China”