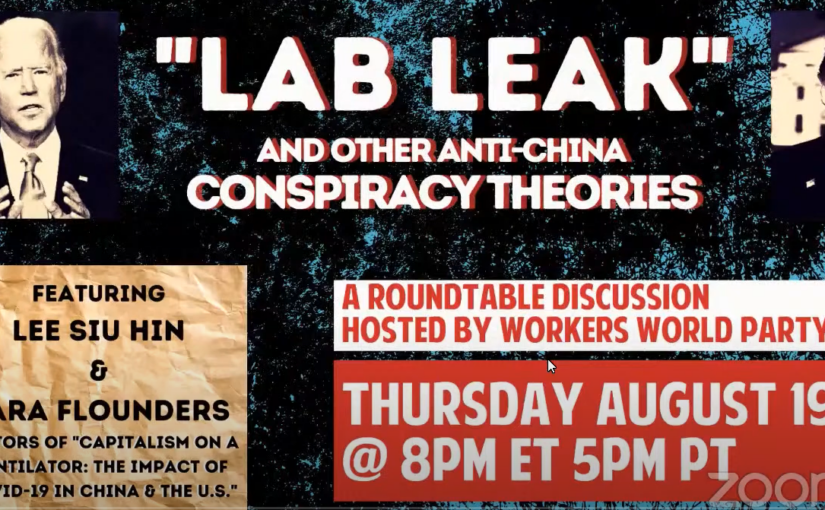 We are pleased to republish the excerpts from a Workers World livestream, which took place on 19 August 2021, devoted to debunking the so-called ‘lab leak’ anti-China conspiracy theory. The video is also embedded below.

Lee Siu Hin: I was in China in January 2020, when there was a new outbreak from unknown sources causing pneumonia in Wuhan, a city in central China. At that time, no one knew exactly what it was. China called formally on the World Health Organization to acknowledge that it was COVID-19 in February. No one had done so officially before that. It’s common knowledge and scientific fact.

We need to separate the fact from the myth, the lies from the scientific proof.

I’m a medical researcher in the medical public policy area. That’s the reason I’ve been following COVID right from the beginning, reading many papers and documents. So why am I saying this is bogus? Simply speaking, the overwhelming majority of us scientists are not buying it. The only people running after “Lab Leak” right now are a very small fraction of the scientists who are not virologists, they’re pseudoscientists.

Thus Michael Gordon, the warmonger who is now working for the Wall Street Journal, has been publishing these so-called exposé articles.

To make it simple: it’s not coming from scientists. It’s coming from the far-right, anti-China warmonger neocon world. They want to shift the blame of the failure of the U.S. response to the virus to China, so the U.S. government doesn’t need to take any responsibility, especially right now amidst all this anti-vaccination, anti-mask sentiment.

After two years, the U.S. cannot even decide if everyone needs to wear a mask. What happened in Florida and Texas is a really good example.

You may have thought that with Biden going to the White House, maybe this conspiracy would go away. Instead, Biden is pushing “lab leak,” and this includes the liberal Democrats. Why? Because just like Trump, Biden also failed the COVID response. And they need to find a bogeyman to scapegoat their failure. That’s what we are facing.

Instead of international cooperation, working together to fight COVID, the U.S. is spending all the resources, all the time, even lots of money on pushing the bogus “lab leak” theory.

This is a war. This is a different type of war. That’s what neocons are dreaming about, from the Atlantic Council to the Hudson Institute, all these think tanks.

But there’s another fantasy. They want to use this to discredit China’s successful vaccine diplomacy and international solidarity during the pandemic, while the U.S. selfishly didn’t offer any vaccine to almost any other country. While the U.S. has become the worst source of spreading the virus to the world, it has the highest infection rate. It doesn’t have any limitations for traveling to any country, so they spread the virus to other countries.

They want to use the lab leak theory to shift the blame to China, and what’s more, direct the international community, especially the World Health Organization, to investigate us instead of the alleged 200 biological and chemical weapons labs the U.S. has around the world. That’s what they’re doing.

Sara Flounders: We should be very honest about this. China is doing something that is deeply threatening to the United States ruling class. China organized an international forum on COVID vaccine cooperation. Everyone was invited. It was by video conference. And at that conference, they announced that they’ve already given out 750 million vaccines. Delivered to people, not just on an airport pallet, delivered into peoples’ arms. They announced that their goal within the next four months was to have two billion vaccines to be distributed to the world.

Now, the U.S. got all angry because they said, what, China’s trying to upstage us. Because the U.S. had just announced that they were going to give 100 million to the world. Just to do the math here, it sounds like a big number, lots of zeros, but it’s only 5% of what China is distributing. And China had already distributed 750 million.

But what China did that was more dangerous to the U.S. They said: “We’re not just distributing the vaccines, we’re distributing the technology, how to make the raw materials, the skills” — in other words, those precious genetic patterns. The U.S. is all about protecting the ownership; lots of people have died from this, but the pharmaceutical industries have made profits like never before. So this is deeply threatening to them.

They see it as an act of war on China’s part. China said, rather than just distributing fish to people, we’ve got to teach people to fish. Now, that’s a very basic concept. We’ve got to share the technology, the skill, the resources, and that’s what we’re doing. And they’re handing it out. So to anyone who’s into protecting patents, such as Bill Gates, Warren Buffett, Jeff Bezos and all of them as a class, they see this as a threat to their very existence.

How do the billionaires control the world in their own interests? One very important thing is establishing foundations which give out gumdrops in order to build a favorable climate for themselves, give out certain things to cut off anger, and yet never give the tools. Bill Gates’ multibillion dollar fortune is built on Microsoft, on control of patents and intellectual property, very important. It was very threatening during the AIDS scourge that really laid waste to populations, particularly in Africa.

There was a call to make vaccines easily accessible through India, through other countries that could manufacture the medicines. The Gates Foundation said they would buy it at full price and then distribute it to many countries, but what that really meant was that the World Health Organization was no longer being used to develop health infrastructure, rather just to give out specific vaccines under specific conditions in this country and that country. And Gates did this by becoming the biggest funder to the World Health Organization.

The other dominant voice in the World Health Organization — no surprise here — is the United States. But even these donations are not enough for the World Health Organization to exist. So it’s really funded by private foundations and the U.S., and they set the agenda for world health, and they do it in a way that robs countries from developing health infrastructure and trained people and giving out specific vaccines in the countries that meet their conditions.

Now, I’ll raise a fact that I just learned today from Siu Hin when we were talking earlier. In Afghanistan, 0.6% of people are fully vaccinated.

So here you had tens of thousands of U.S. troops, and supposedly they’re there on some humanitarian mission. We all know that’s a lie. But you would think at a minimum, providing vaccines would not be a big deal. Now, the U.S. has finally been chased out of Afghanistan, because they brought nothing but war and ruin.