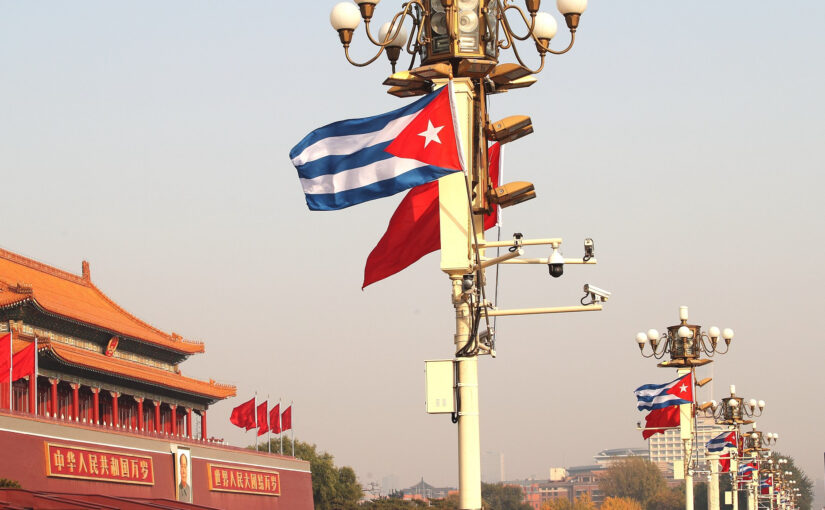 On August 30, 2021, Chinese President Xi Jinping had a phone conversation with Cuban President Miguel Diaz-Canel. The two sides reaffirmed their strong friendship and support for each other’s path of socialist development. China-Cuba bilateral ties were described has having “become a model for cooperation between developing countries.” We reproduce below two reports of the conversation, one from CGTN and the other from Prensa Latina.

Chinese President Xi Jinping reaffirmed China’s support of Cuba no matter how the situation changes during a phone conversation with Cuban President Miguel Diaz-Canel on Monday.

In the phone call, Xi hailed the remarkable achievements Cuba made through relentless struggle under the strong leadership of the Communist Party of Cuba (PCC).

According to Xi, the course of socialism is not always smooth, and the communist party members always fight for survival, development and victory.

China believes that every country should respect each other’s right to choose its development path, Xi said, stressing the country’s opposition to the unilateral sanctions and foreign intervention by some countries on others.

China will always support Cuba along its development path to building socialism featuring prosperity and sustainability based on its national situation, Xi said.

Xi said China will also continue to support Cuba in the fight against the pandemic and help improve people’s livelihoods to the best of its ability and expressed his confidence in Cuba’s ability to realize the new development of socialism.

Hailing the longstanding friendly relations between China and Cuba under the joint efforts of the party and country leaders of the two sides, Xi said the bilateral ties have already become a model for cooperation between developing countries.

No matter how the situation changes, China’s commitment to long-term friendship with Cuba will not change, nor will China’s willingness to deepen bilateral cooperation in various fields. China is ready to jointly implement socialism and realize common development and strategic coordination with Cuba, Xi said.

Diaz-Canel, for his part, thanked China for its long-term support, including its assistance during the outbreak of the COVID-19 pandemic.

Cuba is ready to strengthen party-level exchanges and cooperation in various fields with China and jointly advance the course of socialism and the development of China-Cuba relations, Diaz-Canel pledged.

He also voiced Cuba’s opposition to hegemony, power politics and the politicization and stigmatization of the pandemic.

Cuba is committed to the one-China policy and stands against any interventions in China’s internal affairs. It will continue supporting China on issues of its core interests, such as China’s Taiwan and Xinjiang, and is ready to play a constructive role in improving China’s relations with Latin American countries, Diaz-Canel said.

Chinese President Xi Jinping on Monday reaffirmed his Cuban counterpart Miguel Diaz-Canel the everlasting nature of the friendship between the two countries, the will to boost relations and his unconditional support to the Caribbean nation.
During a telephone conversation, the president assured that no matter how difficult the international situation may be, the fraternal ties that unite the two socialist nations will remain unchanged, local press reports confirmed.

Xi expressed readiness to expand the high-level exchanges, advocated for deepening the pragmatic and multi-sectoral cooperation in favor of the common prosperity and consolidating it, especially on the party side and the fight against the Covid-19 pandemic.

For his part, President Diaz-Canel thanked China for its support and recent donations of health materials, equipment and even Covid-19 vaccines.

He ratified that Cuba supports the One-China principle, is against interference in its internal affairs, respects its position on issues such as Taiwan and Xinjiang, and will also play an active role in promoting ties between the Asian nation and Latin America.

On September 28, China and Cuba will celebrate 61 years of uninterrupted diplomatic relations based on trust, respect, friendship and mutually beneficial cooperation.