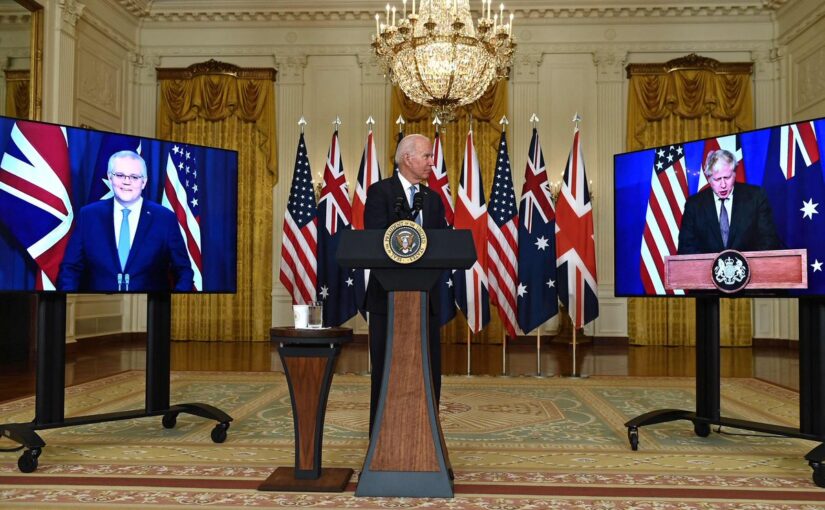 This important post by Kate Hudson, General Secretary of the Campaign for Nuclear Disarmament (CND), highlights the dangerous folly of the newly-announced military pact between the US, Britain and Australia.

If anyone thought that talking of a ‘new cold war’ with China was overstating the case, the recently announced AUKUS military pact must make them think again. Surely timed to deflect notions of US weakness after its defeat in Afghanistan, this major new multifaceted defence agreement between the US, UK and Australia sees the latter firmly jump into the US camp and the former strengthen and renew its Pivot to Asia through unashamedly militaristic means. The UK is coat-tailing the US as usual, hoping to garner some jobs in nuclear reactor production, and trying yet another gambit to boost the ‘global Britain’ profile.

Just six months on from the publication of the government’s big overhaul of foreign and defence policy – the Integrated Review which included a 40% increase in the nuclear arsenal – this is the UK’s second significant provocation towards China, following on from the UK aircraft carrier’s tour to the South China Sea. Australia has the most to lose from this agreement – China is its biggest trading partner and up to recently Australia has avoided getting too sucked into US strategies against China. Earlier attempts during Bush’s presidency to build a ‘Quad’ against China with Australia, Japan and India, foundered when Kevin Rudd withdrew Australian support, but now Australia is back in the fold.

Billed by the signatories as ‘a landmark defence and security partnership’, it’s partly being sold as a values-driven agreement to support a peaceful rules-based international order (US/UK rhetoric for some time now even when the US was unilaterally withdrawing from fundamental pillars of said order); and its key military focus centres on ‘the development of joint capabilities and technology sharing’, deeper integration of security and defence-related science, technology, industrial bases and supply chains.

What this actually means is that the US and UK are going to collaborate with Australia to help provide them with nuclear-powered submarines. Bizarrely the joint governments’ statement suggests that this will ‘promote stability in the Indo-Pacific’; it looks more likely to massively ramp up tension in the region at a time when cooperation with China – in the run up to COP26 to deal with the climate emergency – should be top of the agenda. Not surprisingly, the Chinese authorities haven’t responded well. It’s also dealt a blow to Britain’s relations with France which already had a contract with Australia to provide them with 12 diesel/electric-powered subs to replace their ageing fleet. That contract has now been ripped up but in spite of comments about delays in production and escalating costs, this is not a military-industrial decision, it is a strategic one, fully entering the US orbit – and being granted access to rare nuclear reactor technology.

Nuclear – whether military or civilian – is always controversial and symbolic, and here it means Australian admission to the top level club; only six countries, all nuclear weapon states, have nuclear-powered subs. It is also an indication by the US of the priority it gives to this growing – fortunately still cold – conflict, and its determination to get Australia onside and keep it there. T he nuclear component of the subs lies in the fact they are powered by onboard nuclear reactors. They won’t have nuclear weapons – and the Australian PM Scott Morrison has been quick to insist that Australia will not be pursuing either nuclear weapons or civil nuclear capacity.

Beyond the strategic nightmare created by AUKUS there is much that is not yet clear. Will the Australians build the subs or buy them in? How will the highly enriched uranium necessary to fuel the reactors be provided? There is no doubt that the provision of reactors and the technology they require is the most significant factor here.

Reactor technology is highly prized and top secret, as the uranium used for the reactors is enriched to 95% – weapons grade. The US and UK cooperate on this under the terms of the Mutual Defence Agreement, the world’s most extensive nuclear sharing agreement which first came into force in 1958. Renewed by parliament every decade, the last time in 2014 allowed for greater cooperation on reactor technology. If the Australians were going to build the reactors themselves they would need US technology and expertise and a nuclear-sharing agreement with the US of their own. So the simplest solution would be to buy them in; Boris Johnson’s comments so far about jobs suggest he will try and get reactor orders for the Rolls-Royce factory in Derby. Maybe he will also try for the decommissioning contracts for the spent fuel that eventually needs disposing of. Presumably it will add to the nightmare build up of radioactive waste at the dangerously unsafe Sellafield complex in Cumbria. Highly enriched uranium is stored there but no safe long-term storage facility has yet been found.

Boris Johnson said in Parliament today that the AUKUS agreement did not contravene the Nuclear Non-Proliferation Treaty – that this is for nuclear power not nuclear weapons so the restrictions do not apply. But the fact is we are talking about providing weapons grade enriched uranium to a non-nuclear weapons state to power military submarines undertaking provocative action in a very fraught area of the world.

The NPT does not stop the exchange of civil nuclear technology but it stipulates it must be ‘for peaceful purposes’. Sending war-fighting subs to potential conflict in the Indo-Pacific region is hardly that. This is yet another breach of international law by our government, hard on the heels of the nuclear arsenal increase. It’s time to stand up and oppose the government’s reckless and illegal foreign policy.