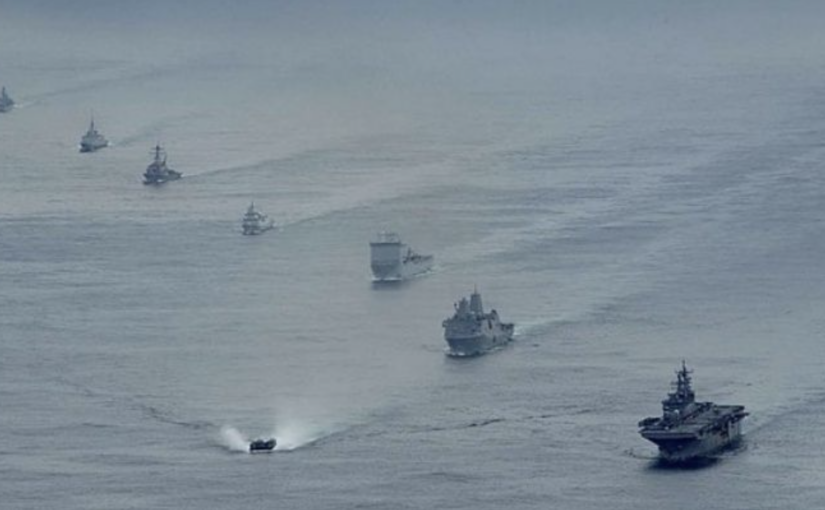 The following article by Joe Glenton (British military veteran and peace activist) discusses the new AUKUS military pact and the fact that the Western imperialist powers, having been forced to retreat from Afghanistan, are not giving up on their militarism and hegemonism, but rather shifting their attentions further East. Reproduced with thanks from The Canary.

Australia, the UK, and the US have signed a new military pact they say will protect their countries. The allies claim an AUKUS (pronounced ‘awk-us’) alliance will support a “peaceful and rules-based international order”. But critics have called the move a new Cold War against China. And some question the Western countries’ decision so soon after defeat and withdrawal from Afghanistan. It seems to ignore key lessons: that US power is in decline and that expeditionary warfare is a recipe for disaster.

Announced on 15 September in a trilateral press conference, the UK government expects the deal to “bolster the Integrated Review commitment to strengthen alliances with like-minded allies and deepen ties in the Indo-Pacific”.

The Integrated Review is the UK’s overarching international security strategy.

The conference – in which US president Joe Biden appeared to forget Australian PM Scott Morrison’s name – saw some discussion of eight new nuclear submarines in Adelaide, South Australia. However, the move had antagonised France, which had signed a £40bn deal to build submarines for Australia. These will now be built as a joint US/UK/Australian project.

According to Reuters, French foreign minister Jean-Yves Le Drian said it was a “brutal, unilateral and unpredictable decision” and that it “reminds me a lot of what Mr Trump used to do”. He added:

I am angry and bitter. This isn’t done between allies.

The UK announcement didn’t mention China. Instead, the text referred to the ‘Indo-Pacific’, saying the region was:

at the centre of intensifying geopolitical competition with potential flashpoints including unresolved territorial disputes; to nuclear proliferation and miscalculation; to climate change and non-state threats from terrorism and Serious Organised Crime. It is on the frontline of new security challenges, including in cyberspace.

The Chinese government, however, had no doubts about why the US and its allies were escalating their activities in the region. And the Chinese embassy spokesperson in Washington condemned the “Cold War mentality”. Liu Pengyu said that countries should not “build exclusionary blocs targeting or harming the interests of third parties”.

Moreover, the UK announced an increased, permanent presence in the region in July. And one of the UK’s new carriers is already in the region.

Some Tory MPs have used the new defence pact to call for hikes in military spending. Defence committee chair Tobias Elwood tweeted that since the move was long-term, an increase was required:

And, according to the Guardian, Australian PM Scott Morrison also wants to increase military expenditure:

He said the push for more advanced submarines, together with an intention to further increase defence spending and draw closer to the US and the UK, would allow Australia to “contribute to the stability and security of our region” and “benefit all in our region – no exceptions”.

As Elwood has pointed out, the US, UK, and their allies are trying to reset after failure in Afghanistan. But the process does not seem to involve learning any key lessons. They’ve cut and run from the Central Asian country. Now they seem set to pump up defence budgets, increase their rhetoric, and refocus on China.