Keith Bennett: A major conflict between China and the US would be a catastrophe for humanity
YouTube Video UCg830gPCU4oA9N_D25bFD4Q_IIgIlRnBPBQ

KJ Noh: The US is already engaged in a multi-faceted hybrid war on China
YouTube Video UCg830gPCU4oA9N_D25bFD4Q_XIeE6VWbEBo

Ben Norton: The US is developing plans to overthrow the Chinese government by military means
YouTube Video UCg830gPCU4oA9N_D25bFD4Q_irnJStS5dVo 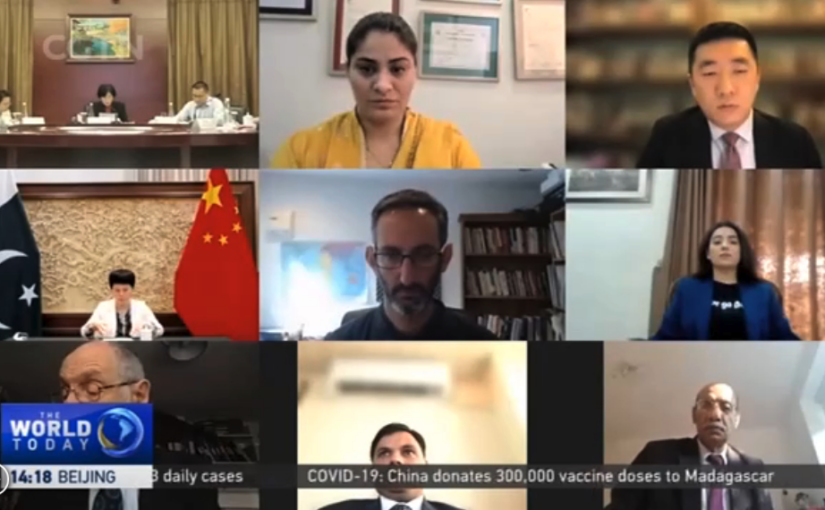 Below is the text of a speech given by Carlos Martinez at the recent webinar organised by the Islamabad Institute of Conflict Resolution and the China NGO Network for International Exchanges to expose the Western media’s propaganda in relation to the treatment of Uyghur Muslims in Xinjiang.

The video of the full event can be watched on YouTube. The webinar has also been written up in CGTN, China Daily, and Asia Free Press.

Thank you very much for inviting me to speak today.

Living in the West – as I do, in London, England – I’m exposed to a very intense media propaganda campaign in relation to Xinjiang.

When I read the newspapers, or I watch the debates in the Houses of Parliament, I often see accusations of Chinese genocide against Uyghur Muslims, of cultural genocide, of forced labour, of forced sterilisation of women, of prison camps. Actually we see these sorts of accusations every day.

Even though the evidence presented is extremely weak, these stories have become a media sensation in the West, and have already led to the introduction of some sanctions against China by the US, Britain, Canada and the EU. Some politicians are even calling for a boycott of the 2022 Beijing Winter Olympics.

The story has penetrated popular consciousness to some extent. It is becoming harder to say anything positive about China. For example to talk about China’s successes in lifting hundreds of millions out of poverty, or defeating the Covid-19 pandemic, or assisting developing countries, or investing in renewable energy, or constantly improving the living standards of its people. Increasingly it seems that to talk positively about China is to be labelled as a “genocide denier” in the West.

Of course, genocide is a very serious change. Genocide is defined by the United Nations as the purposeful destruction in whole or in part of a national, ethnic, racial or religious group.

It is rightly considered to be one of the gravest crimes against humanity. Therefore it is not the sort of accusation that should be used carelessly and without evidence. But that’s exactly what’s happening. The Biden administration and its allies claim that China is engaged in genocide against the Uyghur people. But, as Jeffrey Sachs, the very well-known economist at Columbia University, says: “The US government has offered no proof, and unless it can, the State Department should withdraw the charge. The charge of genocide should never be made lightly.”

There are a number of reports claiming that the Chinese government is attempting to “destroy the Uyghurs as a group,” mainly by using coercive birth control measures.

But the sources of these reports are entirely discredited. The so-called research comes almost exclusively from two sources: an individual named Adrian Zenz, and a think-tank called the Australian Strategic Policy Institute.

Adrian Zenz is presented as a politically neutral data scientist with a passion for human rights. In fact, he’s a professional anti-China fanatic; a senior fellow at the Victims of Communism Memorial Foundation, established by the United States Congress in 1993 specifically to denigrate socialist countries.

The Australian Strategic Policy Institute meanwhile is an Australian government think tank. It is funded by the Australian Department of Defence, the US Department of Defence, NATO, the US State Department, Britain’s Foreign Office, the Japanese embassy in Australia, Taiwan’s cultural office in Australia, and some of the world’s largest weapons companies including Lockheed Martin, BAE Systems and Raytheon. In short, it is deeply involved in the business of New Cold War and the militarisation of the Pacific.

These sources are absolutely not credible. They are organs of information warfare being deployed by the US and its allies.

The facts about Xinjiang speak for themselves.

The Uyghur population from 2010 to 2018 increased from 10.2 million to 12.7 million, an increase of 25 percent. In the same period, the Han Chinese population in Xinjiang increased by just 2 percent.

For example, the US waged genocidal wars in Iraq and Libya, leading to the displacement of millions of people – to a refugee crisis that is still continuing today. How is it possible that China is carrying out a genocide but not creating any refugees?

A slightly more sophisticated accusation is that the Chinese government is engaged in cultural genocide; that it seeks to destroy the Uyghur identity, Uyghur traditions, Uyghur beliefs.

And yet, one goes to Xinjiang and there’s no evidence of any such activity.

There are 25,000 mosques in Xinjiang. Three times more than there were in 1980. This is a very strange type of cultural genocide where the number of mosques increases by a factor of three.

I personally went to Ürümqi in January 2020, with a group of friends. We walked around freely and certainly didn’t see any evidence of religious persecution or ethnic oppression. In fact we saw hundreds of Uyghur Muslims, wearing distinctive Uyghur clothing, going about their normal lives and practising their culture and traditions.

Pakistan’s Ambassador to China, Moin ul Haque, recently participated in a diplomatic observer mission to Xinjiang. He rejected the accusations of human rights abuses, describing Xinjiang as “a mosaic of 50-plus ethnic minorities, and these ethnic minorities exist in a very peaceful and harmonious manner.”

Anyone who visits Xinjiang would have to conclude that the accusations of cultural genocide are unfair and inaccurate.

What we see with these accusations is a very familiar pattern: the imperialist media uses slander and fake news in order to win broad public support for their governments’ foreign policy.

One famous example of this is the so-called Tonkin Incident in 1965, which the United States took advantage of to massively escalate its war in Vietnam – a war in which at least three million civilians lost their lives.

When the US and Britain wanted to win public support to attack Iraq, they invented a story that Saddam Hussein had weapons of mass destruction and was ready to use them against the West. NATO’s armies proceeded to destroy a country and kill hundreds of thousands.

When they wanted to win public support to attack Libya, they invented stories that Gaddafi was using rape as a weapon of war, or Gaddafi’s armies were getting ready to perpetrate a massacre. NATO’s war planes then proceeded to destroy a country again and kill tens of thousands.

All this propaganda regarding Xinjiang is intimately connected with the US-led New Cold War on China, which is a project of hybrid warfare designed to slow down China’s rise, to maintain US hegemony and prevent the emergence of a multipolar world.

China’s rise, China’s success, its emergence as the world’s largest economy, its rapid development in science and technology, its leading role in the struggle against the pandemic, its crucial role in the struggle against climate breakdown, its orientation towards the Global South and the developing world – these all constitute a threat in the eyes of the Western powers.

This is the core reason for the slander, for the propaganda, for the information warfare. It is simply a part of the US-led New Cold War, of which China is the most direct target, but which is in fact directed against the entire developing world, against the Global South, and against the idea of a democratic, multipolar system of international relations based on cooperation, peace, sovereignty and non-interference.

Those of us in the West must work harder to expose the lies that are being spread about China, as these are part of a Cold War campaign which runs counter to the interests of humanity.

One thought on “Carlos Martinez: lies about Xinjiang are designed to build public support for the New Cold War”